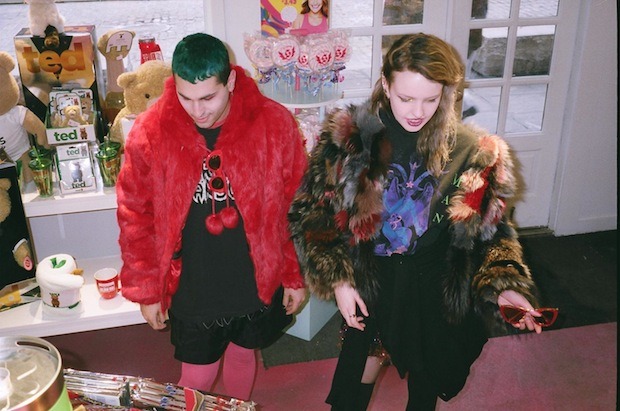 Eric Schlösberg and Elizabeth Ammerman make sure you know they “live by LOL.” Even through the haze of LOLs, the duo has made a name for themselves with only two collections, their clothes stocked at both Opening Ceremony and VFILES. I caught up with the two at Eric's apartment on Wall Street.

Ammerman: We live by LOL. That's what ties it all together.

Schlösberg: It's all tied together by cosplay and costume. That's what keeps us consistent. Whatever the costume were feeling at that moment might be, it's all under the cosplay roof.

Ammerman: It could be from a movie, like The Matrix, or like an anime, or manga. Or school girls or nurses and maids.

How much do you think about wearability outside of a costume environment?

Ammerman: We modernize a lot of the stuff, so it becomes a little more wearable in that aspect.

Schlösberg: We definitely have our pieces that are for sure costumes, that are a little more difficult to wear, but we’ve really grown up a little bit in that we think a little more about wearability these days. Like, is someone going to actually feel comfortable wearing this?

Ammerman: Sometimes its only wearable in our reality.

Does living by LOL ever cause you conflict when you have to deal with ‘outsiders’?

Schlösberg: Totally. Especially as we’re growing, and having more and more press. Like, our idea of LOL actually makes a lot of people really offended. We’re getting crazy people on YouTube like, “What the fuck, a pedophiles dream these kids should die.” I mean, at the end of the day, what are you doing that you’re on YouTube for . . .

Schlösberg: I mean, it’s kind of true though!

Ammerman: Everybody has their own reality.

Are you having a presentation next week?

Was there a reason you decided to not have a presentation?

Schlösberg: I mean we live by LOL!

Ammerman: At first I felt guilty but then I was like, fuck it. It doesn’t really matter.

Schlösberg: At the end of the day, a show is just a big, over-the-top production that a lot of people come to, and like our lookbook still gets just as much press. Why not save that money and be smart about it.

Ammerman: And put [the money] back into the collection.

What anime and stuff are you into right now?

Schlösberg: Right now were both dying over Soulcalibur. It’s a Japanese video game.

What do you play it on?

Schlösberg: Oh we don’t play it. I don’t know how to use electronics at all. For me its less about actual anime, and actual science fiction, and more about the idea of cosplay. Like these people that dress every day to their personal fantasy.

Ammerman: And the weird guys that sit and design for these video games.

Schlösberg: It’s the lifestyle of wearing costumes on a daily basis. Thats amazing. Why wouldn’t you want to dress up like a character every single day? We’re just trying to do that except at a high fashion, luxury quality that really makes you feel like you are Alice in Wonderland for the day.

How do you choose your materials to make these costumes?

Ammerman: We like a lot of novelty fabrics, like tinsels and glitters and stuff, but we also use a lot of leathers and things.

Schlösberg: Both of us love dressing up, and playing these characters, but it’s so difficult to find anything that that actually feels good to wear. You can go to a costume school but they feel like shit, they’re cheap, and the fit is never nice. I want to wear a schoolboy costume made out of silk and satin with crocodile trim and fur cuffs, thats what I want.

Ammerman: But we're the only people that want that.

Schlösberg: And that's what we do.

What are your main influences beyond costume?

Schlösberg: We both have our own. Our design process is pretty independent for a few weeks, and then we combine. Marilyn Manson, Twiggy Ramirez. Music for me is a big influence, I put something on that relates to the collection and just work to it.

Ammerman: Magick for me. Magic with a k. Like tarot and everything. Right now I’m studying voodoo stuff. I think it’s my life purpose to study the occult. Then sometimes I’ll come across like weird movies or something, like right now I’m really into Twin Peaks. Like the costumes at One Eyed Jacks, you’re going to see some of that in this season.

How did you two meet?

Schlösberg: I was working at Seven New York which was the coolest store in the city when it was around. Liz came in to buy stuff and I helped her and told my boss that we should hire her. Then we just started hanging out a lot more.

Ammerman: I’m from Texas. Really conservative family. Christian. I had to go to church every Sunday and Wednesday. Everyone’s really supportive of me now, but they didn’t understand me then. I was the weird art girl. I would wear crazy vintage outfits, everyone in the school hated me. I would write stuff in the school newspaper like “all you stupid girls in Ugg boots.” Nobody liked me.

Schlösberg: I’m from Miami. It was mostly a lot of Jewish people, which is what I am. I have very cool parents and a very cool little brother. They’re all super liberal, like “one with the earth, ray of light.” I went to a tiny private school and had no friends. Everyone was terrified I had a knife in my bag or something, but I’m just, like, a cuddly stoner. I’d never hurt anybody. I had one best guy friend, we were the two goths of the school.