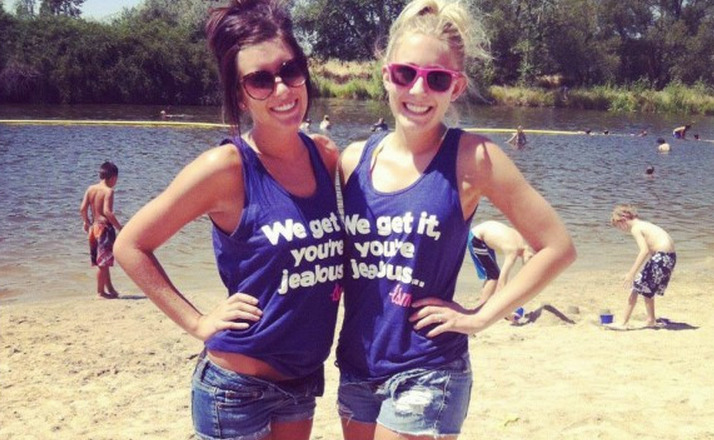 I've mentioned it before, and I surely will again—like now for example—that in our country there are plenty of things that divide us as people, but we can all agree on two things: that no one can agree on anything ever; lists with only two items are stupid; and America is the best place on Earth. Just to be clear, I'm talking about the United States part of America, not the crappy rest of the two gigantic continents called America that don't have the balls to just use the name of an entire region as its nickname even though technically our country is really only a part “of” America. That's because we're better than everyone else so we just do whatever the fuck we want, and if somebody’s got a problem with it, we put them in their place.

Before everyone gets all accusatory and starts proclaiming I'm just some typical Gen-X asshole sarcastically bashing his country and trying to rage against the machine and all that nonsense, let me make a few quick statements so you can go on this ride with me. I feel very fortunate that I live in the United States. It's a beautiful country (in places), with an interesting history (at times), a wealth of culture (some good), and there's been some really killer songs about it (except the country ones). Also. there's the freedom. Certainly it's well documented that America's “freedom” comes with a price tag, because people constantly want to bitch about it, but that isn't the point of what I’m talking about here? When it really comes down to it, that's one of the best parts of America—I have the right to tell you how much I hate it without fear of reprisal.

All that stuff is great, it's really just the people that I dislike. America is full of degenerates, crackheads, homeless people, criminals, and drug dealers, and all that's just fine, I get them, and sympathize with their struggles. I'm talking about the shitty part of our society. The real “lowlifes” of this country are in the majority. They're the 9-to-5 workin', tax payin', bible totin', gun bearin', not carin', minority fearin', flag wavin', true red, white, and blue-blooded Americans who think everything is just A-OK, cuz they got it made. We're filled to the brim with a large portion of folks who just want everyone else to know that they're the best, for no other reason than they lucked out big time by being born in a place where you reserve the right to let everyone know that you're better than them just because you were born there and they weren't.

We've all encountered these over-privileged, entitled assholes, and I myself had a brush with them recently. A few weeks ago I went on a trip to a poor and starving third-world country on a luxurious cruise ship filled with booze, food, and thousands of tourists pissing money away like it was going out of style. As I was sitting poolside, admiring my fresh tan, sipping some fine rum, and polishing off my third plate from the buffet, I realized that I was surrounded by typical American assholes, just flaunting their gluttony and decadence right in front of these poor people. How can anyone be so ignorant? These people are hungry and depressed, and they don't need you rubbing your excess in their face. I felt right then it was my duty to at least prove to these dejected primitive islanders that not all Americans are jerks.

I disembarked onto Grand Bahama Island bearing gifts for the natives there. I brought them cartons of milk that had sat unwanted by wasteful Americans on the ship's many buffets for several days, as well as numerous bags of other various discarded foods I rescued from refuse bins after cruisers felt they were 'too full to finish.” I also wore my “USA Back-to-Back World War Champs” t-shirt just to remind these people of some of our recent accomplishments, and to let them know they're safe with us. But, alas, it was too late. They had already grown distrustful because of all the brash, heartless Americans that had preceded me, and they were unwilling to accept my gifts. Fear not however, for someday I'll return to that place and once again try to bring America back into it's good graces. I noticed a lot of fruits, maybe I'll bring them those next time. They seem to enjoy that stuff, and I'm sure ours is so much better.

PrevPreviousGame Of Thrones (NSFW unless you're in Europe)
NextAPF VII: On patrol at Carson Creek RanchNext