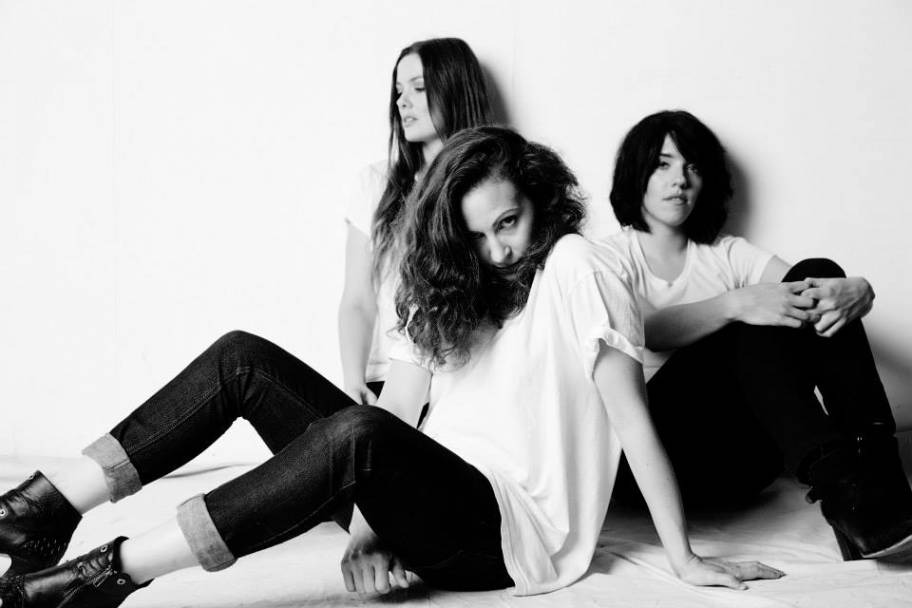 Melbourne-by-LA's A G E N D E R neutralize the overused war of words, titles, labels, and more, with the premiere of “Modern Lovers”. They first made a noise not to be ignored with their Mikey Young-mastered self (en​)​titled album that began the word play game in abrasive terms like, “dis/agree“, to the fashion decorum synth dystopia on the single, “Mani Pedi“. Making the big move to Los Angeles, the Australian trio of Romy, Yolanda, and Melissa prepare to release their new album, Fixations, recorded by Casey Rise at Melbourne's Head Gap studio, in the very near future.

Trading distortion for a synth pop shine, “Modern Lovers” takes on the modernist tale of cold lovers through a clearer view of production. “Dancing/dying in the distance of each other's hearts,” Romy's chorus describes the absent in swift terms from the “planes and trains of the passenger's leaving,” to the game of polar energy opposites, “the light of my heart is when yours is dark.” The spaces in between two estranged lovers is described like the contents to fill a bottomless pit, in the overwhelming descriptions of obsessions and malice; “there's only so much a hero can take,” to the icy endgame of, “a shorter chess game without any moves.” The post-breakup is played out like a post-punk dance party where the former couple showdown from across the dance floor, staring one other down beneath the layers of long bangs and dark mascara.

We had a chance to talk with Romy from A G E N D E R about cutting through the gender constructs, the making of Fixations, the move from Australia to LA, and all about Melbourne.

Synth pop and Melbourne, there is that real kind of cutting keyboard current that so many great artists from there tap into. What do you all feel is the Melbourne method or just general Australian way of synth pop ethics that sets you all apart from everyone else?

Melbourne is very much flourishing now. It's a prolific city. In my opinion, the best guitar based music is coming out of that city. It's insane just how many amazing bands and quality music there is right now.

I think people there just make the music they want. No one is concerned with trends. Most people have multiple projects going on, and there are a handful of local labels that put out records. It's a formula that works. The fact that there is no formula. It just is.

How has the environment of LA affected the identity of A G E N D E R?

I'm still very new to LA, so at this point it's hard to say. I think time will tell how the environment of LA effects AGENDER. Fixations was written and recorded in Melbourne. A lot of the songs were written during winter, so they do have a coldness to them. I wonder how the mild winters, warm summers and constant sunshine in LA will affect my songwriting. I'll find out in due time.

There is a real connection between Melbourne and LA in sound-styling, I feel like Standish/Carlyon captured that essence well with that Deleted Scenes album. What do you all feel is the Melbourne-LA connection and synthesis of style?

Both Melbourne and LA are very distinct cities. They have a certain color and rhythm to them. Not to mention, they're two of the biggest cities in their respective countries. They both have a good quality of life. They're cities that are easy to live in whilst making art. There's time and space to make art in both cities. Music does reflect the environment out of which it comes, so these things effect the music. Stylistically, I think the sunshine and laid back vibes of L.A result in that kind of music being made. The weather is a bit more extreme in Melbourne, and I think some of those extremities come out in the music.

How do you sync your own creative powers as A G E N D E R?

AGENDER is very much a project about immediacy. When I write songs, if the idea doesn't flesh itself out in a matter of minutes, or feels too forced, I let the song go. The songs are very urgent, raw and uninhibited. They feel like a form of self-analysis, a series of stream of consciousness diggings into the unconscious mind. The songs are synched to a certain space in my psyche. The space where desire lives. AGENDER is very much an outlet for me to get out my desires through.

I have other projects where I carefully construct songs and edit them, and use a process of trial and error to give the song shape. I don't really want to repeat that process with this band. AGENDER is therapy. It brings repressions to the surface. It's awkward and uncomfortable and dirty and not sugar coated at all. It's a very necessary creative power in my life.

Was the title a way to band together under a post-gender banner?

In a way, I guess so. As mentioned in the question above, all these songs are very automatic. Because of that, I don't have time to adhere to a premeditated role. What comes out feels like a stripped back version of self. There's no gender performance taking place. I wanted that to happen. I wanted to be free of certain constructs which hold me back from really expressing an unfiltered stance of self.

Even the name itself — I've said, written, typed and heard the word 'gender' so much, that it's lost some of it's meaning to me, which is what I wanted. I wanted to free myself from certain constraints so I could spill out a pure truth.

AGENDER isn't a carefully written speech. It's more of an ad-libbed rant. Not to mention the fact that I consider myself a word play artist. I respect good word play.

What fixations did you all have when recording Fixations on 2″ tape?

Fixations is a spillage of sexual secrets and the purging of perversions. The fixations I had whilst making this record were of a sexual nature. It marks a period in my life of unhealthy sexual obsession.