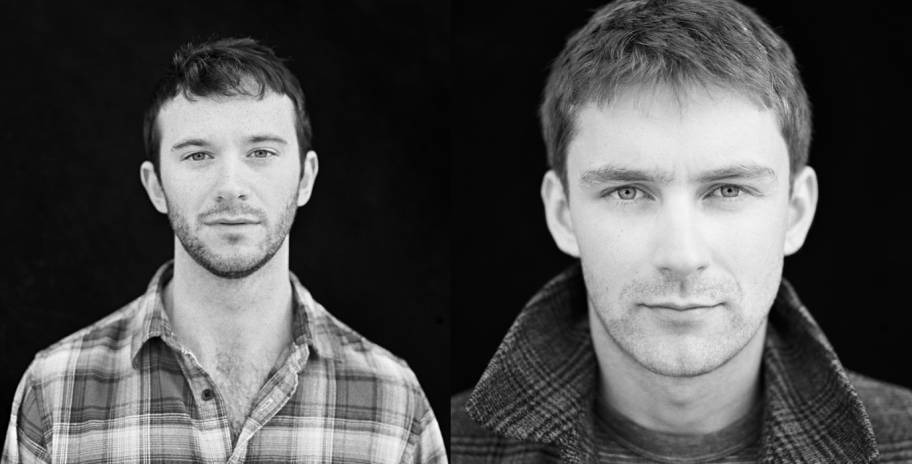 Brooklyn's Awning is comprised of the duo Jon Sheldrick and Luke Smith, who have just released their album Two Against Me. Following up a series of remixes and EPs from recent months and years, their new album finds Jon and Luke combining the places where rural, acoustic countryside song composition is met with the slight but somehow natural elegance of electronic effects and urban accompaniment. The sound of the big city meeting the farmland can be heard from the digital percussion and production combined with wind chime bells and unplugged guitar loops on our premiere of “Mistaken Tendency”.

From the beginning you hear samples of what might be rainfall and forest footsteps, opened wide by a scale of ascending keyboard notes. Warm drum machine and bass hums provide a foundation for the trickle of acoustic guitar strings, floating like papier-mâché or origami made sailboats that stream with serenity down a creek's watery path. In between the production's murmurs of found sounds, bass pools, and soothing chords are Awning's own personal trajectories that are fit for long, solo walks along hiking trails, sharing lyrics about the things in life that you “can't put a finger on”, and the new gifts of the present found in the recitations of “it's another day.” New dawns can be heard through every one of the elements at play, in a song that might inspire the listener to develop tendencies to wander about in their thoughts.

Awning's Jon Sheldrick and Luke Smith talked to us about bridging their folk and electronic parellels, the zen of their sound, the Brooklyn scene, their just released album Two Against Me, and more.

From releasing various EPs, tell us about how the two of you built upon your hybrid of folk/electronic craft to reach your new full-length, Two Against Me?

We’ve been making music together for almost 10 years now. During that time, we’ve played all sorts of styles, but we always come back to sitting down and finger-picking a simple folk tune. We eventually found that recording those tunes was only the beginning, and that you could reinvent them by bringing them into the digital world, and playing with them like you would a synthesizer.

The songs from the first EPs were a series of experiments, seeing how far we could push the notion of ‘acoustic’ music into electronic timbres. For the new record, Two Against Me, we tried to fine-tune that process to a point where we could imagine what the song could become while we figured out chord progressions on the guitar.

What was the accidental and or mistaken circumstances that gave rise to the creation of the song “Mistaken Tendency”?

The instrumental portions were very much a collection of happy mistakes.There’s little pieces of three or four guitar ideas that were recorded at various points in time. None of them were performed at the same tempo, but when you start them all at the same time in a sampler, they create these polyrhythms at random points that give the song its ebb and flow.

The collection of polyrhythms and syncopation create this sense of anticipation in the music, and the lyric is really derived from that feeling, a tendency to follow a gut instinct, regardless of whether or not it makes logical sense, or whether or not the people around you understand.

How do you do reconcile both your more earthier, and acoustic tone to your digital touches and enhancements in the music of Awning?

It’s all about treating them the same. You can make something completely synthetic sound organic, and vice versa, with some simple studio trickery. If you’re comfortable embracing that, it makes the songwriting and production process a completely open book. The danger is that you give yourself too many options, so the reconciliation comes in knowing when to keep pushing a song versus putting it to bed.

What is the zen balance and key to keeping the harmonies of nature and man-made artifices at peace in your sound?

We try to approach it from a perspective that the two are no different. Harmonies of nature, after all, whether it be acoustic guitars or human voices, are man-made in their own right, and so there is no reason why one wouldn’t be able to find harmony between them and electronic tools. It’s all about balance. If we use the electronic as an instrument among several, then it needs to have limitations like any other instrument. Sometimes it’s used for texture, sometimes for lead, but there has to be a give and take with the other instruments that make up the sound.

What do you all make of the current state of music in Brooklyn?

Brooklyn has it all, both good and bad. Perhaps the downside is that because there is such a crazy amount of musical diversity, we have trouble developing what some might call a local ‘scene’. At the same time, that seems to be in line with the spirit of the Borough—diversity, experimentation, respect for tradition, with a willingness to completely ignore it at the same time. That means you could see a life changing show on a Tuesday night at two am, then walk next door and see 30 minutes of something you’d rather forget.

There’s no place in the world we’d rather be making music, but hey… we New Yorkers like to complain, especially when it comes to our neighborhood.

Awning's album, Two Against Me is available now via Bandcamp.