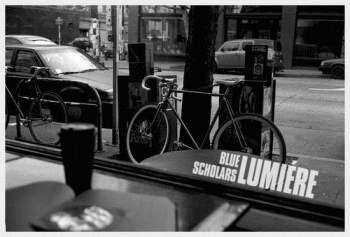 Seattle's Blue Scholars passed along a little story behind its new song “Lumière,” which I've got for you, the reader, in full. It was written by producer Sabzi during a car ride last November – my guess is it was raining. Enjoy:

It was like November 2009 and I was rolling Beacon Ave with my friend
Saman, an Iranian girl who'd grown up between the US / Kenya / England.
We were in the Nissan Sentra she'd bought from a mutual friend who'd
previously bought it from me, and I had bought it from another Iranian
dood in Whitecenter who makes some of the best homemade Joojeh Kabob
you've ever tasted.

She was playing this record from a band called The xx
she recently was referred to by a friend or something off the iPod
plugged into the tape-deck thru an adapter while powered by one of those
cigarette lighter things from Radio Shack.

Yea that's right, it's a cigarette lighter. Funny how new cars don't
have “cigarette lighters” and instead have a circular hole thing for
“power supply” that you still need to buy a special adapter for.
Originally, plugging your walkman, discman, and later cellphone via
adapter into these lighter plugs was an innovative way of drawing power
from what was available to you as a car owner.

Now smoking cigarettes is suddenly super taboo and new cars don't have
cigarette lighters built in to them, but they still have this
power-hole.

My question was, if you're gonna make a car with a power-hole, why not
just make it a REGULAR OUTLET? If you're no longer supplying the
cigarette lighter, there's no point in keeping the whole power-hole
thing in it's original form.

Well, more and more new consumer cars have regular outlets now and that makes this whole argument a little moot.

The point is, the speakers in this Nissan Sentra weren't very good and
made the the music that's being played out of them sound all gray. For
this particular record tho, that didn't matter. Every song on this xx
record was already gray (pardon me, “grey”), they all sounded the same,
and they were all awesome. Perfect for a November drive in the Town.

As we listened to this record, I turned to Saman and said “you know, one
of the first things Blue Scholars became known for was flipping
indie-rock samples in rap songs. It fits in with our whole eclectic,
international-Seattle identity. Also, the only thing that would make us
even more compatible with The xx is if the only South Asian in the
group, Baria Qureshi, didn't quit the band.”

She looked back at me and said “will you please stop talking about work for 5 seconds? I DON'T CARE. Geez.”