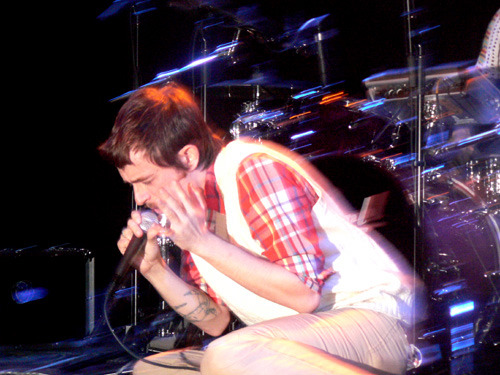 Yeasayer is one of those bands that can make you uncomfortable to watch because they play the smoothest, grooviest licks this side of 1994 and you're pretty sure there's a streamlined consciousness chanelled straight to the early 80s. We won't say they're Genesis reincarnate, because that's like being mean. Talking Heads are in there too, particularly with their idiomatic, cranium grabbing front man, but call it a Talking Heads offspring that does bumps of Duran Duran while taking fashion cues from Spin Doctors.

It seems like one of the best bands of the past half decade plays fewer shows as time goes on. From the evidence, we'd say they're not really playing together so much. Walked all the way to Glasslands for the Psychic Ills, but guess what! They weren't playing.

Holy Fuck played at Galapagos for an Insound party. They fulfill the sonic fantasies of every dude whose ever lived in his parents basement messing with crappy guitar effects pedals. Just us? Ok cool. It's digital kraut-rock chilled by east coast Canadian Toronto-transplants and its a good head nod music – different each time they play it but tethered to gangly hooks and loose structures.

We caught the last moments of Moon and Moon, who sounded a bit like freak folks transplanted to Sigur Ros's volcanic terrain. Not quite glacial though. We got to talk to them after the show and our interviewer was entranced like a pubescent flower child to Charles Manson. Could not look away.

A Place to Bury Strangers

AP2BS impressed me, both sonically and visually, last time I saw them at Mercury Lounge. Tonight though, is somehow strikingly better. The band opens with what sounds like a new song (though certainly consistent with the gnashing shoegaze fury that is their trademark) and a projected, ever shifting-grid that covers the entire stage and all three members. As the grid moves and changes so does the band, becoming little more than abstract geometric shapes one moment, illuminated the next, and then turning to hazy silhouettes a moment later. This continues through several favorites, including “To Fix a Gash in Your Head” as intensity builds, finally erupting into semi-blinding strobes that reveal the band at last. The audience stands mesmerized (well, besides the two guys asleep back in the bar) as a Place to Bury Strangers blast in and out of dissonant feedback and roaring melodies, crashing guitars down on the stage in a resounding din, over the next… well… it's hard to say, it could be ten minutes, or twenty, or more, time just seems to be holding its breath for them the whole time. And then it's over, silence sweeps back in, and I have long ride back home and a long night of assembling these stories and images.