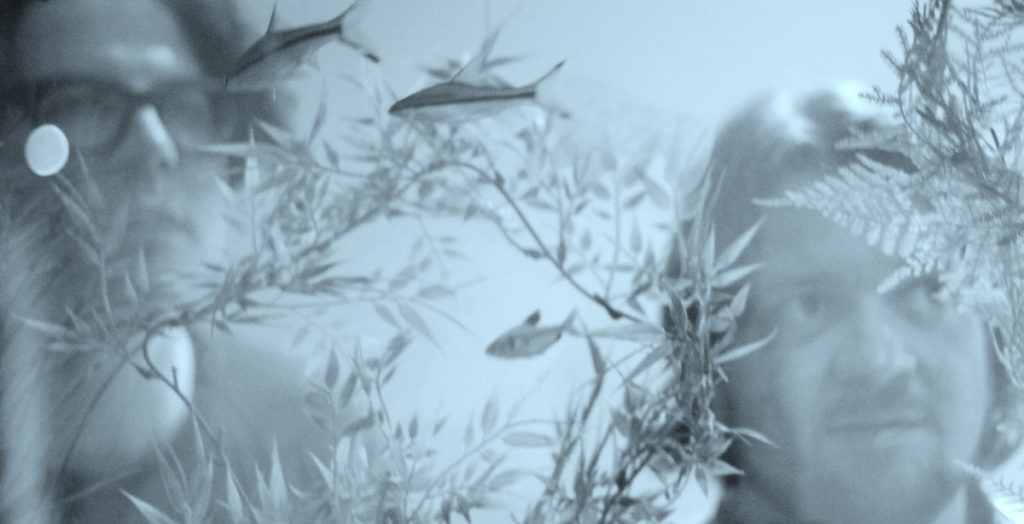 Dallas’ self-proclaimed neo-psych, baroque pop duo Corner Suns – comprised of the ever talented Brandon Carr and John Dufilho – has been consistently turning out some of the most catchy music since their inception in 2015. We’re lucky enough to have the head bobbing premiere of their latest track, “Speed of Sound” right here.

In honor of the upbeat track premiere, we got to throw some questions at the guys. Check out our interview below!

How did you first get introduced to music?

John: When I was a kid, my friend’s older brothers played us Rush, Yes, Ozzy, Judas Priest, Iron Maiden, a lot of classic metal. I loved it all. The only thing that scared me was AC/DC. I heard “Dirty Deeds” and thought they were serious. They’re still my fave out of those. Then I discovered The Clash and The Ramones when I was in fourth grade and it changed everything.

Brandon: My dad always made sure he had the best stereo money could buy. So there was always music around the house.

What are some of the earliest records you remember listening to? Who introduced them to you?

Brandon: My earliest musical recollection was an album called The Music Machine. It was a Christian children’s album by a group called Candle. It was set in Agapeland and taught children about Jesus. I remember listening to it and staring at the trippy artwork on the cover and inner packaging. The next thing I can remember is “Elvira” by The Oak Ridge Boys. I can vividly remember watching the MCA decal with the rainbow and clouds spin as I anxiously awaited the “Giddy Up, Oom Poppa Oom Poppa Mow Mow” bit. I didn’t really get into music until fifth grade when “Appetite For Destruction” came out. For the next few years I moved from hard rock and metal band to band. I even had a pretty sweet Eddie mask. But then Nirvana came along and, well, you know the story. Even though I have a fairly eclectic taste in music these days, I still gravitate toward those early metal years. I suppose the people that introduced me to music were my parents, Riki Rachtman, then Lewis Largent.

What sort of chemistry has grown between you throughout this recording process?

Brandon: I feel that I have gotten better at knowing or anticipating what John is trying to accomplish. It was a little tough in the beginning, but we got it now. Also I think John kinda likes me now.

Inspiration must be plentiful to continually create new music- what keeps you creating?

Brandon: John is the real prime mover in this situation. His knack for cranking out quality music is awe-inspiring. I’m a better collaborator than creator. I tend to dismiss my own ideas before they can come to fruition. But my therapist says I’m getting better – or not – I dunno. Forget it – it’s stupid.

How are creative influences from past projects impacting your current direction, if at all?

John: It’s all in there. To me, Corner Suns sounds like The Deathray Davies, The Apples in Stereo, The Earlies, John Singer Sergeant, CLIFFFS – all rolled into one record. It’s actually beyond that. Dallas bands I’ve played with and loved, recording engineer friends of mine I’ve learned from… I’m lucky to have people like Brandon to collaborate with, as it’s a million times better than on my own. More fun, too.

Brandon: I’ll leave that one to John.

What’s going through your head, Jan. 2017 quickly approaching with the release of your self-titled album?

John: Trying to stay positive despite Nov. 8th. Hoping that people will listen and give this record a chance, as I’m really proud of it.

Brandon: It’s amazing that I’ve had the opportunity to work on this record. I’m excited to see it get released.

John: Aside from this one? Hmm, I’d like to record with Georgia Hubley or maybe Robert Pollard (see attached photo.) Heroes.

Brandon: It would be awesome to do something with Peter Gabriel or John Dufilho in his prime.

How was collaborating with Sarah Jaffe on a couple songs?

John: She’s amazing. “Intuitive” would be a good word to describe her. She understands and expresses a few levels above the rest of us, I think. Plus, she’s funny.

Brandon: I didn’t get to work with her directly but I was thrilled when John told me that she was going to sing on some tracks. She is a super talented singer and musician.

Is there a particular frame of mind that a listener should have to best connect with Corner Suns?

John: Like, what drugs go with Corner Suns? Let’s go with post-2AM with headphones.

Brandon: The listener should maintain a sense of child-like wonder.

Anything else you’d like to let our readers know?

John: If you’re curious about our record beyond this, start with “Through The Winter,” that’s another of my favorites. It sets a mood.

Brandon: Thank you for taking the time to check out our record. Making it was a joyful and humbling experience. Thanks again, John.

Corner Suns’ self-titled debut will be out January 13th via Idol Records.