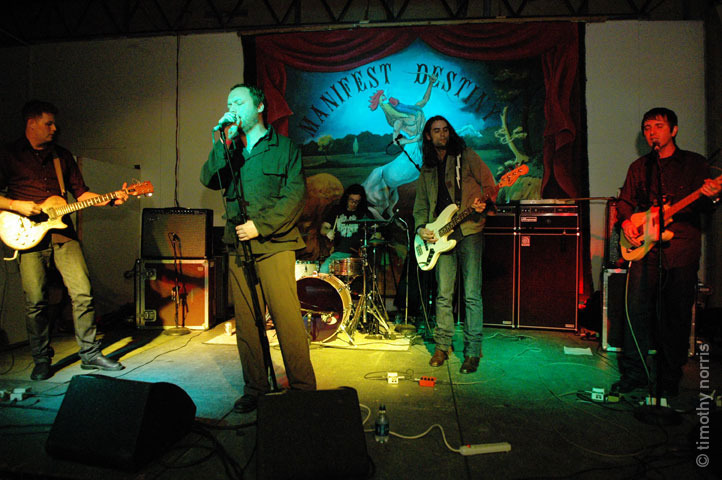 Congrats to those Anglophiles from NYC/Philly for pulling it together and getting on up to the “intimate” “Cafe Artist's Tent” at Bonnaroo. (In translation, the tiny tent where one can hypothetically seek refuge from big cheese acts like Tool and Ben Harper). But hey, did you know that in American, 'favorite sons' refers to home court advantage when running for office? Like, for instance, Al Gore should win Tennessee, were he to run for office? Well, it does! I hear that yawning. Don't be bored, the Fav Sons are out supporting sprightly indie poppers Voxtrot all through June:

Frontman Ken Griffin isa songwriter gifted with the sort of incisive, heartbreaking lyrical skills that would turn Lou Reed or Elvis Costello a bright shade of green. Their debut album on Vice Records, has “sleeper hit” written all over it. THE STRANGER

It's music that celebrates the revelatory power of songwriting IRISH TIMES

Their full-length debut Down Beside Your Beauty is exceptional. They could easily become the new torchbearers for that Television/Velvet Underground New York thing some people hold so dear. The songs are just that good. PHILADELPHIA WEEKLY

The multinational coalition Favourite Sons trade in what the Waterboys' Mike Scott would call “The Big Music,” a grand, anthemic sound that soars on emotion and muscular musicianship. Rabid blogerati have already anointed them serious contenders for the Next Big Thing of 2006. LA WEEKLY

Anchored by booming rhythms and Griffin's contained but convincing vocals, “Your Beauty” is as remarkable for what it isn't (fashion-conscious or gimmicky) as what it is (straight-up rock with lyrical stylings as likely to snap your neck as the music).”
LOS ANGELES TIMES

This offering from the new toast of NYC travels at a bone-rattling pace, managing to sound grubby, desperate and heart-thumpingly romantic. THE GUARDIAN
“Should you be in search of another pop band that will steal your rock & roll heart, then the Favourite Sons should leave you swooning in no time”. – BILLBOARD