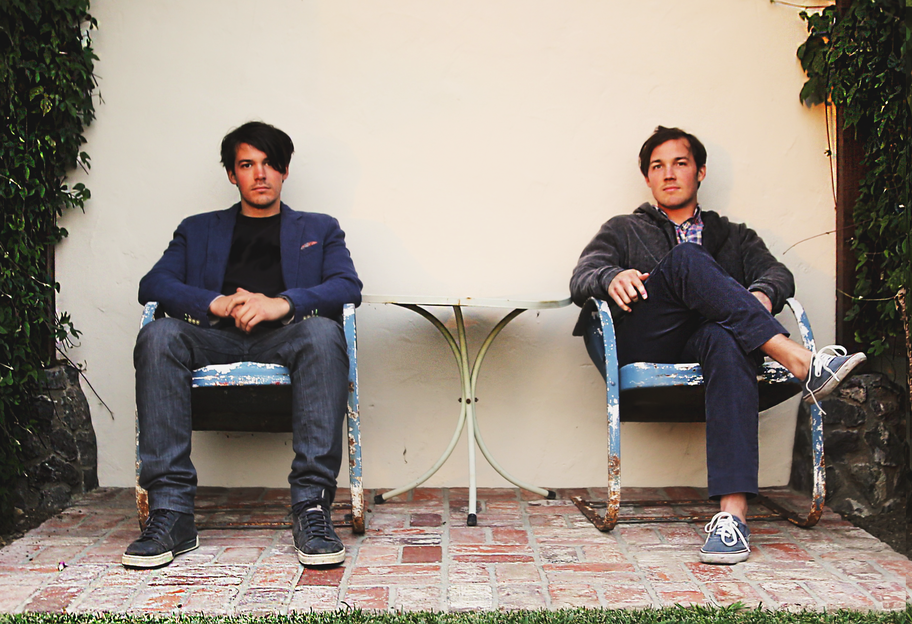 FinleyKnight are the duo of brothers, John Finley and Connor Knight Detjen who have been readying their self-titled for release in early May, and premiere the 'turnt-up' tea party for, “Madhatter” today. The Chicago centered siblings spent under a year in Los Angeles to work with the esteemed Joey Waronker to further develop their rhythmic regiments and various compositions in progress that appear on the new album. The result is what happens where conventions of songwriting meets the formats of drum and bass models of dance pop that invites new appointed definitions.

The density and intensity of the percussion programming and drum recordings that make up “Madhatter” had us asking Connor and John to walk us through the track's stages and phases of creation. The layers of drums, effects, rhythms of pianos rage against time, silver platters, and lyrics that rap against the past. “So let me feel it, how I felt it, how it started, set my feet back, turned around where we departed, send me back, send me back…” The distances between Chicago and LA can be heard in the traveling courses of drum fill marches, and synthesized reinforcement that sends the song out on a two minute finale where the bustling Los Angeles traffic packed sound takes route for the wild winds of the midwest. Joey's contributions to the madcap dances of, “Madhatter” further brings out Connor and John's song compositional aspects within the brothers' Chi-town rhythm nation visions.

FinleyKnight's John and Connor talked with us about their musical background, tour stories, working with Joey Waronker in LA, getting deeper into their songwriting and components of production, and much more.

You two have had some fun tours in recent years, how was your excursion down in Argentina?

John: Argentina was the greatest thing FK has done to date, apart from working with Joey. We made it a goal of ours to tour in a new country, and randomly chose Argentina. We connected with a manager of a few Argentinian bands, Arteyes, and he was such a nice help. We showed up to sold out shows with our name on Marquees, and to be honest, we weren't positive anything was gonna work out, given we were communicating with Arteyes through Google translate only. The entire tour was amazing, and we met tons of nice people. Argentina has a great vibrant music scene, and we learned a lot from them. We plan to head back for another tour in Argentina this winter.

Connor: The trip through Argentina was an amazing one. John and I had decided we wanted to travel and play in a different scene/country, and Argentina happened to be somewhere we really wanted to go. We had both been to South America before, and we felt that there was sort of a music revolution going on. It’s hard to explain, but people in general seemed to be really receptive and appreciative to new music. I think we played some of our best shows down there! The trip was also great because we had down time in between stops to explore and meet new people. We’re trying to plan round two soon..

You both have moved from Chicago to LA in the past year, what impact has that had on your own sound crafts and composition?

J: Moving to LA was a big step for FK, although now we are back in Chicago. LA is like no other city I've been to. You can see the creativity everywhere. Everyone is working on a creative project, and the community is so encouraging to this. Joey introduced us to a number of musicians, and we met a lot of people during the eight months we were there.

C: One thing to take from LA is the feeling of being completely immersed in a creative community. This definitely has inspired our songwriting and help shaped this record. There’s a lot of times in Chicago where we feel we’re one of few in the room so-to-speak, but out here there’s a good chance the person next you is involved in the creative community and that is a great feeling to have as an artist. I think being in a new studio has also had a major impact on new sounds. We explored a lot of new instruments on this record which definitely added to our repertoire of sounds, which is always fun. LA has been a really inspiring place for us to create.

Give us a behind the scenes view on the making of your upcoming full-length with Joey Waronker.

J: Working with Joey changed everything. He taught me so much about producing and rhythm. His studio is in his house, in the hills of Los Feliz, and we'd be there from 10am to 10pm every day for a few months. He was so welcoming to our ideas, we really felt like he was a third band member instead of producer. We'd all share input and work all 3 of our personalities into the album.

C: Working with Joey has been an eye-opening experience for us and our music. He really is a master of rhythm and syncopation and his drumming on the record really led us to some new depths that we had yet to discover. The way the record was put together was sort of a long process for us. It started about two years ago: John and I began recording the tracks on our own, in a number of different cities. Once we got to LA, we began digging into the songs with Joey, one by one. Some, we completely re-recorded, and others, we left nearly unchanged. Each day, we would show up and listen to some of the changes we made the day before, or often to the late additions Joey made over night. Then we pick a spot to start and get to work again. Joey’s studio is filled with a ton of cool instruments, so it was fun for us to try out new things. The process was very collaborative and creative which is what we enjoy the most.

Working with Joey has been a complete pleasure and we are really happy with how the record has turned out.

Between the two of you, take us through the writing and elaboration production phases that makes up the electric tea party that is , “Madhatter”.

J: Connor started Madhatter, and it all began with the rhythm. The way we work together in songwriting is: one of us will start a song and get to almost 75%, and then the other will shape it the last 25. This allows us to get a full idea onto the tape before the other bends it in their direction. We pass hundreds of logic files back and forth before finishing a song, but I usually won't show a song to Connor too early, and vice versa. We had an entire guitar track on “Madhatter” that didn't make the final cut. I'm glad we took it out. Joey brought an entirely new sound with his rhythm, and helped us expand our use of looped vocals across the song, as well as the album.

C: “Madhatter” started to form an existence nearly two years in our Chicago studio from a single beat I become obsessed with. I remember on that first day of really wanting to take a crack at singing right away but I was in a hurry and had to leave the studio. So I actually brought my laptop into my car and propped it up in the passenger seat. I then drove while recording myself singing over the first ever version of “Madhatter”. Most of the words were nonsense, but sometimes that's a great place to start. Soon after, John began collaborating on the track and adding some of his own ideas to mix. We passed it back and forth for awhile, but eventually shelved it for a number of months actually. Joey really helped bring out the rhythmic adventure in this song. The two minute ending became a favorite of the three of ours, when the songs hits a climax in my opinion. This was one of the last things we worked on in the process of recording the record. The title is fitting to the creation of the song.

How did you two discover you were music matches?

J: Connor and I are two of five siblings. We have an older brother, Paul, and two younger sisters. Paul is an amazing musician, and we play a lot of music with him, but Connor and I seem to always be on the same page. I can start a riff, and Connor will immediately know where it's heading. We have played together since we were very little. We had a set up in the garage, and would play any chance we got. Connor now knows most my every move; I like to find ways to surprise him with the music. Hopefully he'll never have me fully figured out.

C: Growing up, music was always a big part of the family. We had a wide variety of musical influence as our parents would let us jam out to Grateful Dead or dance on the tables to Michael Jackson. Eventually, the three boys in our family started a cousin band… but we performed only once. I was eight years old. Later on, John and I did the garage band thing for a long time, and it was in college when we decided we really wanted to pursue music. Our oldest brother Paul is actually a phenomenal piano player…we’ve been trying to recruit him for years! But he’s smarter than to get involved with our crazy life.

What are you guys listening to right now that you can't get enough?

J: Trap Beats and looped vocals is my main thing. Disclosure is playing in the studio right now.

C: The Range. I recently saw his show in Chicago and it was really outstanding. Also, I’ve always loved Annie Clarke of St. Vincent. I think she is one of the most creative song-writers out there and I really like her new album. John and I share similar tastes and influences for the most part, but its always fun when we’re listening to completely different styles for awhile.

J: Our summer plans are to tour extensively.

C: We’re planning to tour fairly heavily this summer and also we’re hoping to find some time to start recording again! Maybe we’ll find our way down to South America…

FinleyKnight's self-titled will be available May 6 and you can find them playing the following dates: