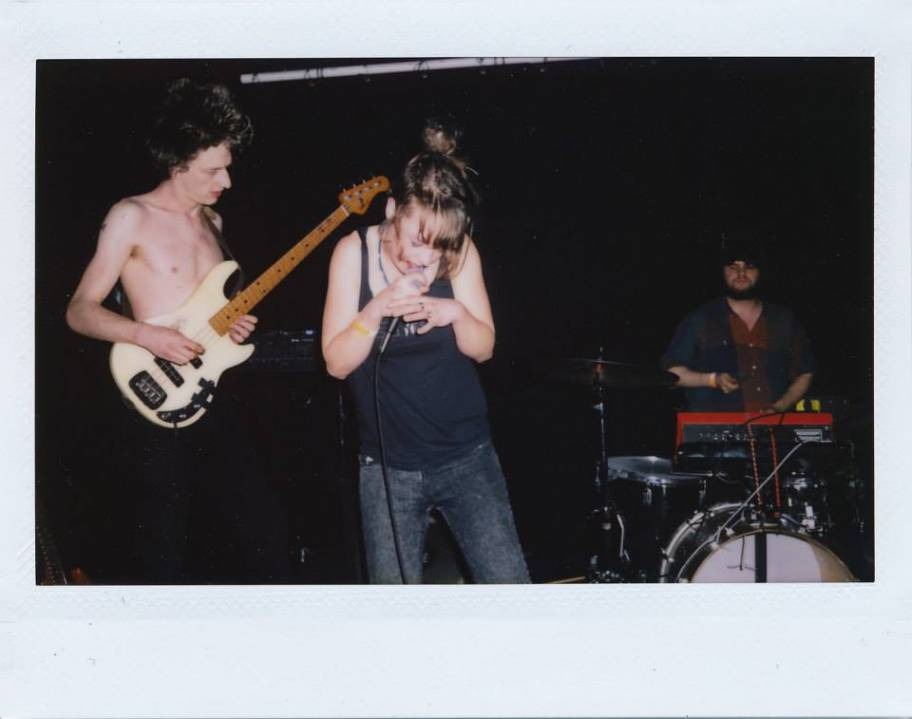 Guerilla Toss herald from Boston, MA to trash up the place, mess up the practice space as a dedicated group of cacophonic commitments with the wild, “Trash Bed”. These true believers comprised of Kassie Carlson, Peter Negroponte, Simon Hanes, Arian Shafiee, and Ian Kovac keep the dadaist spirit thriving in the underground. Preparing their album Gay Disco for December 10 release from NNA Tapes, the Guerillas give us a listen of things to come from the bold imprint that rocked 2013 with releases from Ryan Power, Jason Lescalleet, Ahnnu, Ben Greenberg's Hubble project, Migrations in Rust, and others.

The opening chant of “she, loves to-workout, be-cause, she loves to” gets the exercise started and the blood moving. But this is no ordinary workout routine, nor is there anything very routine about anything happening on this song. Kassie, Peter, Simon, and Arian utilize every instrument at their disposal as if it were a percussive weapon. The aesthetic and ethos might sound like the long lost progeny of Kleenex/LiLiPUT or the kissing cousins of Foot Village; but our ears tell us that these bright young Bostonians want to be nobody's daughters or sons but their own. “Trash Bed” is the sound of getting wild at the strip mall's 24 Hour Fitness, and makes a gigantic, glorious mess of sound that stays the course of their own plan of getting and keeping in fighting form and shape.

This morning we had the chance and privilege to talk to Simon Luxardo Hanes from Guerilla Toss who was generous in his responses to a couple of our pressing inquiries:

As a group that really are without conventional peers, in what ways has Boston informed or incorporated itself into your creative fabrics, be it local art scenes visual/musical, civic, social, and or otherwise?

Of course, we should start by saying that we in fact have many conventional peers – perhaps not conventional in the sense that we all make the same kind of art or music or whatever, but definitely conventional in the perspective by which we are approaching what we do. Suffice to say that we wouldn't be where we are as a band if it weren't for the incredibly strong support system provided to us by the Boston underground music scene. Boston is a very interesting little hot pocket – equal parts hardened working-classers, perpetually drunken frat boys and artsy waifs, all squished together into a stinky pile of mess. However – and this is Boston's little secret – those who happen to be of the same mind will undoubtedly find each other, partially due to the city's size (fairly unimpressive) and partially because what the fuck else is there to do on a friday night, for Christ's sake. Our group of peers – and we are blessed to be with them – have made it their modus operandi to be all-inclusive – any kind of band making any kind of music which is exciting and fairly genuine will have no fear of being excluded – anything from garage-pop to thrash metal to hyper-outsider performance art – Last week we saw a guy spray-paint his balls pink, decimate a microwave, hand a random audience member $50 bucks cash and then run out into the middle of the street hollering and waving a flaming brick. It was awesome. Point is, Guerilla Toss would be nothing if it weren't for the heaps and heaps of hot wet inspiration we derive from the people around us. And just in case you were talking about the Boston the band – whoof – we've really taken a lot from them over the years.

Not sure how big into baseball you all are, but how has the Red Sox 2013 World Series win affected your worlds, environments, morale, or in what ways has it been a nuisance, and how has it been impacting Guerilla Toss as a whole?

None of us really care that much about sports, at least in the sense of… who won or who's going to the playoffs or who got traded to what team or whatever – I'm pretty sure we were all shaving our pubes or reading Archie comics or something when the Sox won. What's really cool about sports to us is the way they affect fans – they give regular people an excuse to dress like wacky idiots and get fuckin' wasted and then go outside and flip cars and light shit on fire and run around freaking out and that's what we wanna do too! Boston especially seems like they're all about that shit. Some kinda weird thing with aggression – we like aggression. Unchecked aggression can sometimes lead to very interesting things. So from that perspective, yeah – it's kind of cool to know that we're perpetually surrounded by people who seem normal but will go completely apeshit as soon as they're favorite team of athletic men start kicking ass – it's the ultimate excuse. Making music is our excuse for doing that, but we get to do it a lot more often. But in the end it doesn't change the fact that we all have clean-shaven groins and erotic fantasies about Betty and Veronica. And that's what life is all about.