Habits, “Splendor of the Panic” 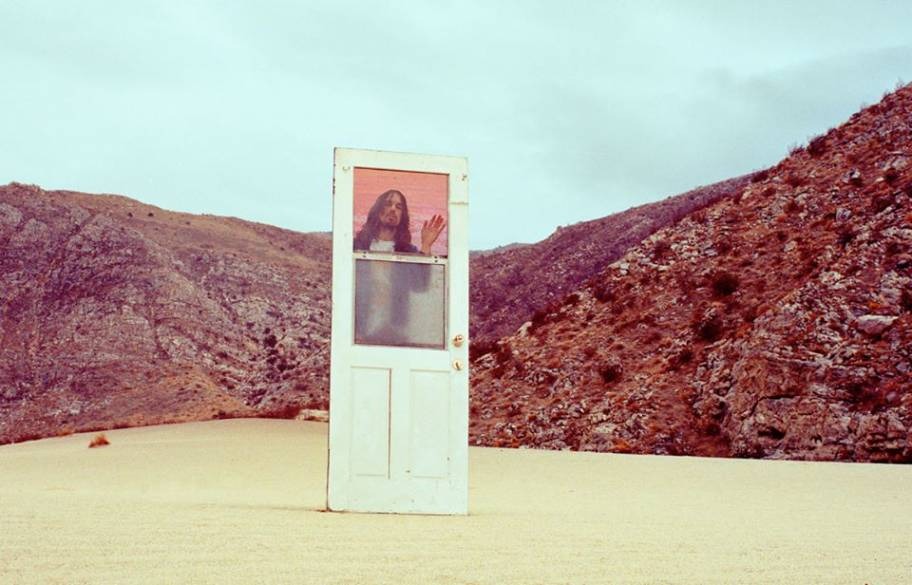 Keeping LA wavy and weird, we can thank Dustin M Krapes and his friends for the void riding vehicle of Habits. Reaching from an inspiration gained from the cosmic abyss, Krapes prepares his album Unselves in Arrival for release February 25 on Fleeting Youth Records. From the mind and space of ego and self, Habits unhooks the umbilical in the art of letting go. “Those ideas, words, and songs that reveal themselves are kind of like the 'unselves'… or 'anti-selves', if you will”, Dustin described for us, “The act of expressing them is, in a sense, 'letting go' of them.”

On our premiere of “Splendor of the Panic”, Dustin Krapes hits the blast-off buttons as the onset experience of unhinging oneself begins. Before Dithy Ramb (wrestling pro in his own right) kicks out the floor tom stomp and snare, the electronic effects blasts set the scene. The panic streaked eyes send out audio lazer beams of perception, with Garbiel Armenta's bass acting as a life boat/life vest to keep you afloat to wage the psychic sound storm from Krapes' existential-metaphysical battles of the ego. The superpositions of these worlds collide, like a vision quest gone strange in the fringes of arid LA outskirts, or a psychotropic mirror staring session that sends vanity into the perceptual pitfalls of bottomless rabbit holes.

We had a chance to talk with Dustin about his orange and white cat Pachuki, an inside look at the happenstance nature of his song development, all about the upcoming Unselves in Arrival album, and the helping creative hand for his demos and visions from his friends.

You work from a pastiche bevy of various visions for your work, I was wondering how do you share that vision with your eclectic Habits bandmates Dithy Ramb (pro-wrestler), and Gabriel Armenta (taxidermist)?

Dithy, Gabriel, and not to mention previous collaborators Bobby Vega on drums and Kyle Souza on bass/bass synth, have all been gracious enough to help me carry out my vision for songs. I pretty much write and record demos on my own, then bring them to the band to fine tune things, translate them for live shows and for recording. Dithy joined last May, taking a break from his supposed career as a world famous professional wrestler, and is a very creative and skilled drummer. We all bounce ideas off each other when it comes down to fine tuning songs for live performances.

How do you begin to describe the big letting go of yourself and mind that makes up the forthcoming album, Unselves in Arrival?

When writing songs, especially lyrics, I tend to visualize some sort of cosmic abyss which I experience as being something that occurs both in my mind, and out in space somewhere. I pull inspiration from there, and I think of that as pulling ideas from within the self, or the ego. Those ideas, words, and songs that reveal themselves are kind of like the 'unselves'… or 'anti-selves', if you will. The act of expressing them is, in a sense, 'letting go' of them. Musically, for initial inspiration, I like to tinker around with sounds or samples randomly and let them guide me until I hear something I like. I let the sounds take control for a while. I rarely have an idea for a song in my head before I actually sit down to start making something… I let it come to me as I am creating it. Which I guess isn’t totally unusual… But anyways, I pretty much started this project as a way for me to let go of certain inhibitions and rules for songwriting that I had previously imposed on myself.

Is it sort of a consciousness expansion to push to say, unhinging the conformities that contain your daily perceptive and respective faculties?

I am fascinated by the thought of consciousness. In my songs, I think I’m usually expressing a sense of wonder with consciousness. The act itself of examining it and playing with those ideas and abstractions seems transcendental in a way. And in that way, the songs are a form of escape from the typical day to day human experience.

Now “Splendor of the Panic”; would you say this is a raw paean to the onset of the ultimate out of body experience?

It could be something like that… although, with the way I go about finding lyrical inspiration, it’s less of an 'out of body' experience, and maybe more of an 'inner space' experience. Still, maybe those are two sides of the same coin. I’m just reflecting abstractly on my human experience. I think I usually attempt to evoke feelings rather than making perfect and immediate sense.

The Habits attitude seems to treat the concepts of rock, and electrical items/treatments as kind of like a whatever, it just happened that way kind of naturality. How much behind the scenes planning and concepts if any are at work here and how much of it is just indeed-happenstance?

Usually, an initial idea for a song comes in the form of a short loop. I just start poking around at sounds randomly and a bit haphazardly until i hear something; a phrase or rhythm that i want to use, and eventually I get very meticulous with things as a song evolves. The song arrangements are very calculated. As far a concepts are concerned, I’m sure you could find underlying lyrical themes or feelings, but i didn’t set out to tell any story. As i do rely on a lot of happenstance, it’s almost like the concept of the album is to have no concept.

We heard you were a cat dude. What's your cat's name?

Yeah I’m a cat dude. My cat’s name is Pachuki. Born to be a star. She is orange and white, and makes cameos in most of my videos.

Will cats eventually and ultimately save the future and take over after humankind has completely blown it?

I think the future will be cool, and yes, cats are definitely taking over. Have you noticed they have reptile eyes? Considering they sit around and play all day while we work and bring them their food, maybe they are already in charge and we don’t even know it…

Unselves in Arrival will be available February 25 from Fleeting Youth Records.

PrevPreviousPalm, Into the Bulk
NextThe Rebel Set, How To Make A MonsterNext