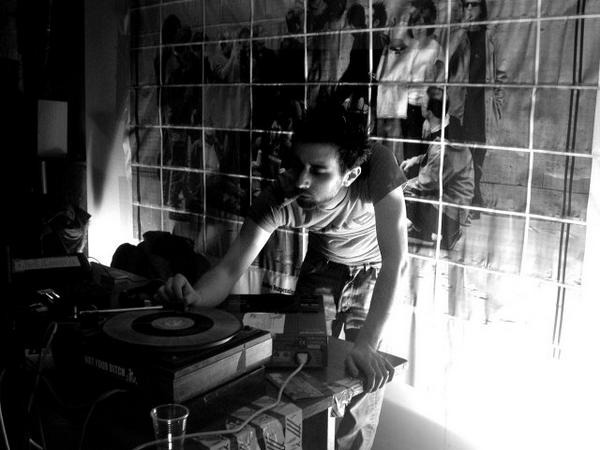 Hypo is the moniker of Anthony Keyeux, a scruffy Parisian who has been making brilliantly unclassifiable electronic pop music since 2001. To properly diagnose his music takes more than an afternoon Googling his varied and constantly growing group of collaborators (which has included Momus, Konki Duet, O.Lamm and His Name Is Alive, to name a few). It also takes the willingness to widen your palette; to listen while being fully aware that the music is not going to go where you want it to. Or better put, “where you expect it to.”

Carpet-snatching aside, the rewards are always sweet; as with Hypo’s latest output, Coco Douleur, out now on French-based imprint Tsunami Addiction. I recently got to chat with Anthony where he revealed some of his secrets through a genealogical jaunt across the obscurities of Youtube.

Why all the collaborators?

For me, collaborating is very convenient for several reasons. First, I am not a good musician in an academic sense. I can't write music – I can play the bass a little and keyboards as well – but I am a very bad performer. Working with people who can play “real” instruments is a good way to solve this problem. Also, the further I progress in my curse, the greater I realize that I feel more like a producer than a composer. It makes me consider my music like someone else's work and that helps me to criticize myself in real time.

So, you’re sort of using your collaborators as a painter would paints?

Yeah. This album is actually the first time that I’ve felt that way. I did not think about it in these terms when I made the record, I mean… but it is not a process, it’s a posteriori.

What was the first pop song you ever remember hearing?

Well, this is actually the first time someone has asked me this. As a child, I guess it was something on TV. Maybe the “Chapi Chapo” theme by François de Roubaix. I was born in 1973, this song is from 1974, so it might be this one.

And a few years later, “Rectangle” by Jacno in the Nesquik commercial.

That actually hits home for me. I’ve always kind of thought of your music as like, this peyote-induced vision while watching foreign television from the early 90s.

I guess that’s a compliment. But I don't take illegal drugs and I don't have any TV set at home. I just drink vodka and smoke cigarettes.

What music did your parents bring you up on?

My parents are not really into music. But I remember that my father listened a lot to “Oxygene” by Jean Michel Jarre in 1977-78. He had a new hi-fi system and this was the soundtrack of every Sunday morning in the living room. As a child, I was very impressed by this music and I was terrified by the album’s artwork.

Has Parisian nightlife influenced your music?

Parisian nightlife really sucks these days. The last good nightclub closed down five years ago. It was called Le Pulp and it was just perfect. But now I often go to a place called Rosa Bonheur (made by the people of Le Pulp) which is a bar in a beautiful park where people get drunk very fast as it closes at midnight every night. And you can also dance there.

Is there any sense of community for electronic musicians in Paris?

For me, the label has to be like a family. In this way [Tsunami Addiction] is perfect. I mixed the new album of La Chatte, I worked with Kumisolo (her band, Konki Duet, just joined T-A), I worked a lot with dDamage, I think it is important to create a local scene.

Do you believe people are given pop too easy?

I like pop music when it is not only pop music. I like when people go into a studio to try things. There is nothing new to this. It has always been like this.

Early Pink Floyd was quite strange.

Disco Inferno were also very important to me. I like the idea of pushing limits. You are still in the pop music territory, but there is more than the songwriting.

Is confusion the only way through which pure experimentation can exist?

Maybe. I don't know. Pure experimentation is not interesting in itself. Experimental does not mean clever. The experiment can work or it could fail. Life is science.

In your style of creation, is there any room for improvisation?

Yes, I have recently started to make improvised music with some mates. We did this once in the Centre Pompidou in Paris and for some radio sessions.

I like it a lot. I like [improvising] in the tradition of sampling. I mean, it is a bit out of fashion these days. But I like the idea of starting this now, when all of my ex-label mates stopped doing this. I never really took part in this before as there was an over saturation of projects like this. Now it is over and I feel the need to do it. In a very Marclay/ Mego way. But I have not tried this method for an album yet.

Frequently in the press, they’ve mentioned your elements of comedy and cynicism. Can you explain this?

Cynicism, I don't know. I prefer the word irony. Maybe it is because I always try to make music that talks about music; a kind of Meta-music. I come from the visual arts world and it is important to me to put a bit of postmodernism in my music. Maybe post-postmodernism now, I hope.

And I’m not sure if I see comedy but maybe humor. I like when I do something in my music that makes me laugh. If it still makes me laugh three days later when I listen to it, I keep it.

What are you trying to achieve with your music?

I want to create objects. And of course they can be a projection of fantasies. Or a way to express something related to the human body, sex, disillusionment, antisocial feelings, or animal behaviors. But I try to hide everything in a pop shape, as I don't like demonstrative artists.

Is there motion in your music?

Sometimes. More and more, it seems. But I don't really think about it, BPM or anything. We all know that anything is danceable.