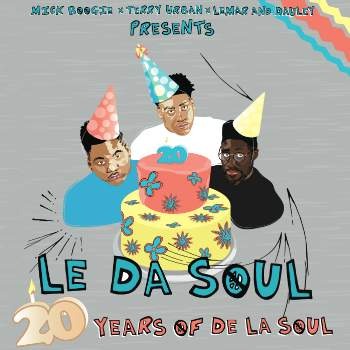 It was only a week ago we were in the dark searching for a release date for Mick Boogie & Terry Urban's Le Da Soul Mixtape: 20 Years of De La Soul.
The official mixtape dropped. With
contributions from Talib Kweli, Camp Lo and Phife Dawg, this mixtape showed promise. But who are these other rappers?!

I'll excuse U-N-I, Fly Union and Tanya Morgan as these groups are hailed as the next generation of Native Tongue rappers. Get past these dudes, who are barely allowed on the red carpet and you start hearing rappers that delivered pizza to the studio. Brittany Street? Sean Christopher? Christian Rich? These guys didn't even have time to think up rapper names before recording verses.

Thankfully, a few of these unknowns took advantage of this opportunity to honor De La Soul properly. The tongue-twisting styles that Posdnous and Dave flip on “Plug Tunin'” are done justice by Tabi Bonney and Stalley. Once again, I find me, myself and I collectively pondering, “who?!,” but Tabi won me over with lines like “Could go from a D.C. cypher to hang gliding off that Hollywood sign in L.A.” and “I came up proper in every sort of obstacle / Tecmo Bowl taught me how to run an audible / My audio is gourmet food to the beat / fine listener / definition of hot temperature.”

Camp Lo continue to reclaim its status as one of the illest groups of all time, proving that senectitude does not stifle creativity. In Camp Lo's case, their style is based upon nonsensical slanguage, so even if they had Huntington's of the Alzhiemers of the Delirium Tremors they would still sound dope on record.

So these are a few examples of acceptable contributions. The mixtape has its merits, but synths and corny singing on Kid Daytona and Mike Maven's interpolation of “Eye Know” had me plug tunin' to the next song. I will spare you a tirade on 6th Sense's version of “I Am I Be” and simply say, all I could take from his words is that the new generation is a slave to its own narcissism.

Get
it here if you feel so inclined, but we've got the songs we enjoyed available for download below.