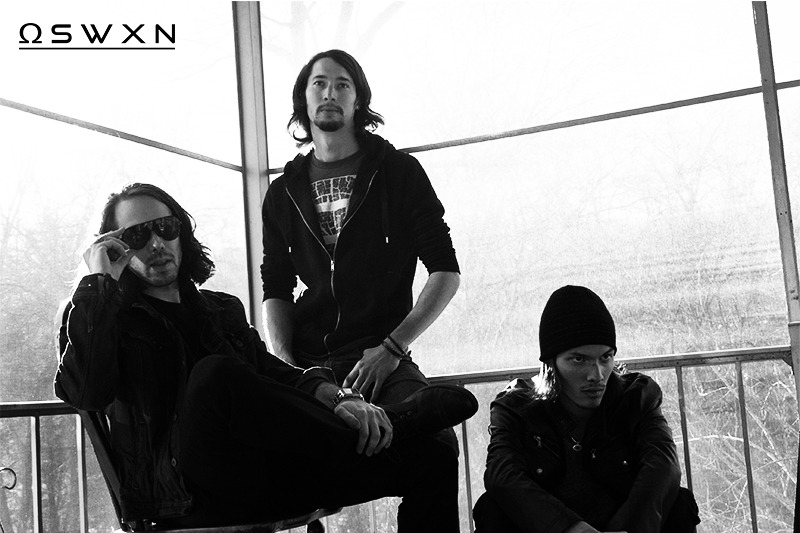 By our own admission, we spent a lot of last year enjoying a variey of Nashville, TN bands, artists, and idols. Around the time of OS-1's release we got hip to Omega Swan, thanks to fellow Southern bound buddies Blackbear & the Surf Bums. In the spirit of interplanetary geared garage sonics, and recent “Rad Planet” video antics; the triple threat of Marcus Garceau, Will Burgess, and Mark Madison serve up ample amounts of amped up scuzz and new lunar shifts on the premiere of, “New Moon”. These are the sorts of dudes who can practically play any style they want to, packing a stylistic array that some critics mistake in diminutive descriptors like 'unfocused'. If 2013 taught us anything, it is that Nashville's great melting pop of indie pop approaches are crucial to giving us beloved DIY hits from good people like, Diarrhea Planet, Nudity, Blackbear, Natural Child, Ranch Ghost, Western Medication, the entire Jeffrey Drag Records roster, and a bunch of other folks I'm forgetting. But I digress, as we bring you the debut, followed by a heart to heart with frontman, Marcus.

Omega Swan summons in the new phase with breakneck energy. First it's Will throwing back bass notes to Mark's steady rhythm counts, as Marcus brings the song into it's tangles of drama, mayhem, and chaos. And the three don't miss a beat or cue as they jump through the verses, sections and bridges with a feeling and sense that all the while they are waiting to just unleash a torrential fury of noise. And of course, the three wise men deliver, running the gamut of Music City blues, bro funk beats, and straight up radicalized rock & roll. Marcus takes it all to the hilt with humorous song about bumbling through the ways of romance, while trying to hang on affectionately/desperately to the one that's trying to get away. “I love you so much, and I need you to love me-I love you so much, why don't you love me?”.

Marcus joins us to talk about Omega Swan's beginnings, possible Blackbear & the Surf Bums side projects, cosmic balances, rock and roll, and Nashville.

Every artist and everyone in Nashville has their own relationship and experience with Nashville, TN. What is the Omega Swan take on life and being in a band, living in Music City USA?

Man, Nashville is on fire right now. It’s incredible. You have to be here, in the graffiti covered basements, ears bleeding and sweat dripping to really get the full experience. But we can tell you it’s one of the most culturally diverse scenes out there. We see rad music and art on all levels, from basement shows to arena concerts any day of the week. Punk, blues, rock n’ roll, hip hop, EDM, it’s all here. Inspiration is everywhere.

People told us “Don’t go to Nashville, you’ll be a small fish in a big pond.” Good. That’s exactly what we are, and we’re ready for that. That pushes us to be better, do more, think higher. The minds and tools we need are all right here, and now we’re able to collaborate effectively.

How did you all, Marcus, Will, and Mark first form Omega Swan?

I moved to Nashville from Providence, RI in late 2011, and I was randomly roomed with [our drummer] Mark at Belmont University where we studied Music Business. He came from a metal background, I came from the blues, but I was dead set on starting a band immediately and it kind of just fell in my lap. We lived in an apartment on campus and weren’t supposed to jam in there, it was small. We cranked up to 11 and riffed out until they came busting through the door to shut us down. [Bassist] Will was in our group of friends and played guitar. We thought he’d be a great fit on bass, and he was down to make the switch. In February of 2012 we played our first show, and now here we are.

Given the Omega symbol often attached to your name, are you all general fans of the Greek alphabet?

Not necessarily, but the whole concept of the Alpha vs. Omega was always intriguing to us. We associated the Alpha with the 'man' that tells you what you can and can’t do, they set the rules, the limits, and they keep you in a box. The Omega is always the one seen as the outcast for breaking those rules, getting out of that box, and they are usually shunned by the followers of the Alpha. But to us, to the counterculture, the Omega is the one that creates art and puts out the coolest new shit. They are the ones that make an impact. To us the Omega is a symbol of rock n’ roll, the struggle, the fight for what you deserve, and the inevitable revolution.

Like the astrological shifts in process and progress; guide us through the blaze of “New Moons” sun reflecting forecasts for the new year.

That all goes back to what we were talking about with the meaning behind Omega. This 'lunar cycle' that our society has been in has reached the New Moon phase, and we are ready to start over. It’s like, our generation has been growing up in this mess of an economy for most of our adolescence, and in all honesty we are smart enough to make a change. We have tools that our parents generations didn’t have, tools that make us more powerful and impactful(sic) than ever before. That change will only occur when we can realize that the rules currently in place are outdated, and everything needs to evolve in order to survive. Our generation is going to be the ones to make that evolution real, starting in 2014. Omega Swan is here to inspire others to make those changes in themselves to push the limits, so together we can make that impact this world needs right now.

What else does Omega Swan have in the works for us?

2014 is going to be a busy one for sure. We have tons of new content we are about to release, starting with this new single. A few more singles are lined up, along with some new videos, that will be leading up to a compilation release that we can’t really discuss quite yet. But definitely expect a lot of content, and some touring as well. Our new live show is complete with extremely psychedelic visual projections. We wanted to put on a performance that made you feel like you were experiencing the whole vision of Omega, not just hearing. We hit New Orleans and a couple other cities next month, and are in the process of working out an east coast tour in the late spring.

I know you guys are tight with our other friends, Blackbear and The Surf Bums. What are those guys up to these days? Any collaborative business occurring between you all?

Those are some of our closest homies in this scene down here. They’ve been by our side since day 1. They got us our first show ever. Ricky is up in the CLE right now, but he should be making his way back down to Nashville soon. He and I are actually talking about putting a side project together, and I know Carter is doing some trippy stuff in his own solo side project called Dionysian Mysteries. When Blackbear is in town, and our other friends in r∆chel are here, our team is unstoppable. The whole squad is on the same exact page, and all hustling. It’s an experience of a lifetime, and we know it. We wouldn’t have it any other way. Rock n’ roll all night, party every day. Ω