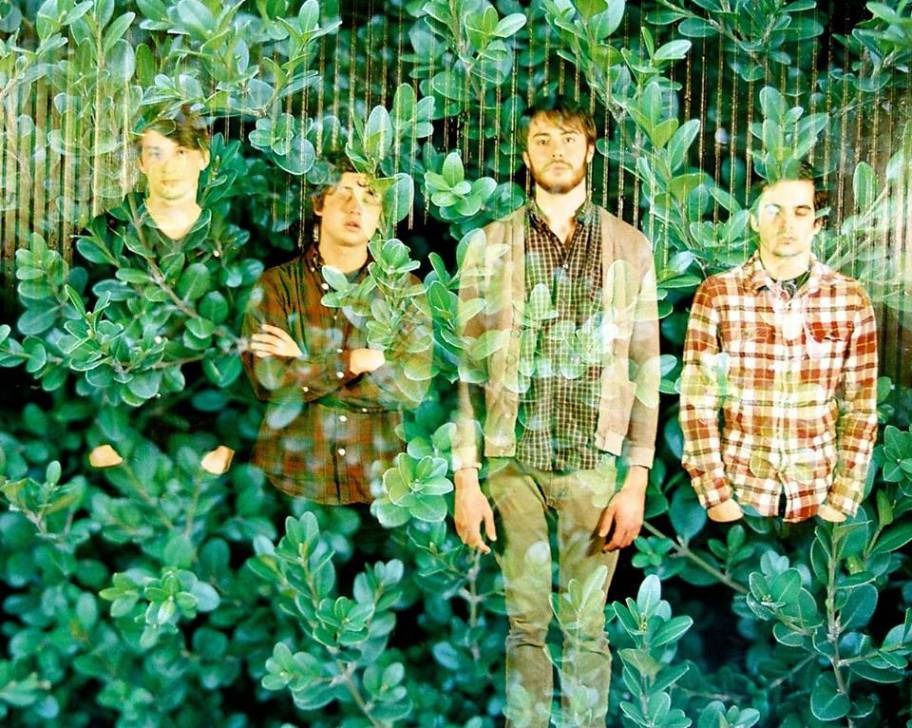 Over the past weeks we have enjoyed a sampling of songs like, “Riverside“, and “Clearhead Real“, and today we bring you the full album stream of Still Paradise from Bloomington Indiana's Plateau Below. If those early listens were any indication, the quartet of Logan Carithers, Jared Jones, Jacob Gumbel, and Joseph Creech have already given us some of the year's best sounds. On their upcoming full-length for Jurassic Pop Records, Plateau Below shows us the sonic seasons of change with nods to the golden and modern eras that further solidifies Indiana as an indie music hotbed.

Opener “Eris” eases you in like a high-flying plane soaring above the Midwest's patchwork farm fields and into the ether of a séance hosted by Plateau Below. Then before you know it, they switch things up with the post-doo-wop wild running ode, “Evaline”, flipping back the books 50, or 60 something years. And while the nostalgic detour trip gets you trying to place or pigeonhole, “Riverside” pulls at the heart in a down-and-out narrative that comes from the center core of American popular songwriting. It is the timeless nature of songs like this where Plateau Below couples fatalism with the promise of future, in a mixture of helpless-hopelessness with a chance of help and the possibility of hope. On “Outside The Gates” you can hear the band hitting their stride and sound where the generosity of fun with lyrics is put to a celestial cloud soaring arrangement that even provides lyrical notes on their process: “You'll always find me picking and grinning, and listening for the sounds of the hi-hats ticking (repeat).”

The anthem power high-riser of “Clearhead Real” shows sign of a big stage song that has all the makings of a tour song ready for the festival circuit. A found and gathered sound collage marks the flute propelled interlude, “Lolo Boy” that provides a segue way intro for the clever and creative magic of, “Twiggy”. This where you witness the quick chord change responses and wits of Plateau Below, as they turn inside-out the so-called safety with things that psych-lounge tags alone cannot provide in qualitative and quantitative accounts. “Dying Down” winds down the cycle of Still Paradise with a sentimental blood-letting of built-up and bottled-up emotions that are spilled all throughout the mellow drifting song's warble. Listen closely and softly as the commencing trickle of guitars are met with the sound of running water. One of the best albums of March, 2014 is already here for your ears, followed by a close look at the multi-faced importance of indie Indiana.

And now we present our interview with Plateau Below to give you the inside scoop, behind Still Paradise, and everything around the Indiana scenes that you have always wanted to know, but didn't know ho to ask.

What are some of the more inspiring things about Indiana that have made their way into your guy's sound?

We all grew up on the banks of the Ohio River. Three of us grew up in Evansville; Logan grew up just a little up stream in this small town called Boonville. Here’s some things that inspire us about Indiana that have found their way into our music:

– Mock Orange (a band from our hometown)

– Boredom, not a whole lot of pastime options growing up (play sports or play music)

– Larry Bird (King of the bank shot) (also from Indiana)

Thoughts on the Indiana scene?

We think it’s a really thriving scene right now. We have some of the biggest and best Indie labels right here in Indiana; Jagjaguwar, Secretly Canadian, Joyful Noise, Asthmatic Kitty, Dead Oceans, etc. Then there are a ton of these smaller indie labels who are doing awesome things, like Jurassic Pop, XRA Records, Flannelgraph Records, Elsewhere Records. And the bigger labels around here like to work with the smaller labels too. Joyful Noise, Asthmatic Kitty and Jurassic Pop are teaming up to release this awesome colab between Sufjan Stevens, Son Lux and Serengeti called Sisyphus.

Then there are all these great bands. Bloomington, where we live, has traditionally always had a great music scene. Muncie, another college town in Indiana has a great scene. We always enjoy playing up there. Our hometown of Evansville has really built up a great scene over the past several years. They have a couple small labels and tons of great bands down there right now.

How did Plateau Below form?

Logan wrote all the songs on the album, and he’d written some of them as far back as 2010. He had shown us demos for “Clearhead Real” and “Evaline” back when we were freshman here at IU and we all thought his songs were incredible (We are now seniors here at IU). At that point the rest of us were still playing pretty regularly in our old band. Eventually our old band called it quits and that's when we started working on songs with Logan. At that point he had a lot of material stock piled, so we had the ability to pick and choose from our favorites to develop into full band songs. It just kind of happened naturally. We were all in bands in the past that played together so we were already friends. Everyone enjoyed the sounds that were coming out of the whole full band thing, so we kept doing it. And here we are.

What is the story behind the name?

Originally, it came from the mouth of our friend Dan. He was out of his head and he was rambling on and on and suddenly “Guys…I’m on the plateau below right now” came out of his mouth. It just made sense. I think it’s about going below your state of consciousness. Everyone could have his or her own interpretation…almost like meditation, being beneath whatever is happening right in front of you. It could be a good or a bad place; you could be going there to escape real feelings that are happening on the outside, or you could just be there, content, going with the flow of things.

Tell us about recording Still Paradise.

We began tracking back in March, almost a year ago. We went into a friend’s studio and tracked the drums, bass and rhythm guitar in live takes. We wanted to capture the varied tempo feel of a live performance. We then took our time filling in the rest, adding lead guitar, tracking vocals, and bringing in the various ornamentations that can be heard on the album such as vibraphone and trumpet. I tracked piano at my parents house on this old player piano that they have in their living room. This took us most of the summer. We spent much of the fall mixing the album. Aside from the initial tracking at our friend’s studio, we tracked it all and mixed it all ourselves.

There's like vintage rock and roll love songs like “Eris”, “Evaline”, to the mortality obsessed “Riverside”, how do you go about composing and writing your songs?

Logan had written some songs way back when he was living in a dorm at a junior college in a horrible little city called Vincennes. He was just messing around with different styles and recording these little songs on his laptop. He was listening to a lot of doo-wop and 50s love ballads at the time, and “Evaline” just kind of came out one night. He wrote a song that could be sung like he’s singing to time. Like as if time was a girl. But it’s also about a girl at the same time. It has multiple meanings.

“Riverside” is a poem from the point of view of a homeless guy that lost everything, but he knows that in the great scheme of things, everything will be fine. He might be dying now, but he’s going to be flowers someday and there is peace in that. Logan had some chords already and just sang the poem to a melody over it.

Logan then brings the songs to the rest of the band and we flesh them out. Adding melodies and counter melodies, changing rhythms and tempos until we feel like the song has transformed beyond its original composer and has turned into something that is collectively ours.

Love the name of your Jurassic Pop Records imprint, other indie releases we should be aware of?

Jurassic Pop has released a lot of awesome albums in the last year and I know they have some exciting releases in store for the rest of this year. Some of our favorites from the last year have been from Sleeping Bag & Rozwell Kid, Faux Paw and Varsity.

Other awesome releases from the past year outside the label:

I really am digging hard on this band from our hometown of Evansville, IN called Thunder/Dreamer. They’ve got a real mellow indie rock vibe that is just overall soothing. Steve Hamilton is an amazing songwriter.

What's next for Plateau Below?

Well, we’ve got some tour dates set up throughout the next few months. Here’s our where we’ll be in March:

Hopefully we can meet some new friends and listeners when going through these places. We’ve been working on a lot of new music as well, so we’re really excited to get those songs developed and play them for everyone. So hopefully these next few months will be a big step for us as a band. Or maybe we’ll all die in a car wreck or something. We really can’t honestly answer this question with full confidence.

Catch Plateau Below's album release show tonight, February 27 in their hometown of Bloomington, IN at The Bishop. Check their Facebook event page for details.