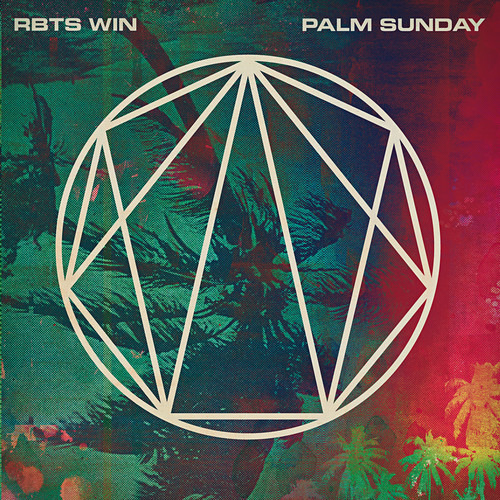 Asheville has always been on the music radar but recently the electronic scene has begun transmitting blips that keep us returning to discover new output. Earlier this year we were introduced to Marley Carroll, who later released a split with a duo known as RBTS Win. The split was somewhat of a segue as RBTS Win prepare the release of Palm Sunday Deluxe Edition in May.

Comprised of Javier Bolea and Cliff B. Worsham, RBTS Win build soul-tinged psych pop with hints of r&b and tropicalia escapism, while never fully disconnecting their art from the mountain life in Asheville. They are grounded in message, striving for better living and clear minds freed from the social traps and control systems set to pre-determine our waking days. On “Stay Wavy” the duo are caught up in the wonderment of illumination's first glance, the eye-opening of rekindling child-like amazement for one's surroundings. While “Stay Wavy” hints of tracers, RBTS Win never fully committ to the notion this was done under psilocybinic influence. The track rather notes the natural world's offerings like fire flies in a field at night and the kaleidoscopic wheel of an iris.

Listen to “Stay Wavy” below and read on for a brief interview with RBTS Win.

So you guys were introduced by mutual friends. Did it come with resistance or an awkward phase due to the blind date-like suggestion? Or did you guys meet one another with open minds?

Javier: The first time we met Cliff touched my eyes with two fingers through a pair of glasses which had no lenses. I took that as a sign that we were cool, ya know? We never intended to make tunes when we first met as we were both committed to other projects at the time and touring a lot. One night we ran into each other and without much discussion, probably under two sentences, decided we would be into working on something. It's always come natural – working on music. After that conversation I kind of put off making anything for the project for about a week when one morning I woke up to a sparrow fluttering around my bedroom. I jumped up opened my window and the bird flew right out and I was like – no more waiting. Been doing it non-stop since that day in '08.

When I think of electronic music neither Asheville or North Carolina would traditionally come to mind, but in the past few years it keeps entering the conversation. Has there been a sleepy scene there for some time or is this a very recent development?

Javier: I've been here since '06 and I remember my favorite thing to do was check out some of the experimental/noise and electro-pop stuff that would go down weekly in AVL. In fact there is always some interesting music to see live whether it's at the Orange Peel or someone's basement. I do think with the emergence of Moogfest and bigger acts coming through regularly there is more of a national spotlight on Asheville now. It seems like the city is poised to be known more as a place for artists of all forms to come and work. We have definitely considered moving to a bigger city in the past but we are super proud of what Asheville has become and continues to become. We are proud to be in the middle of it.

How was your Moogfest as both performers and attendees?

Cliff: This years moogfest was amazing. Much different from the years before both as an attendee and performer. This years focus was not only on being a fan of music but also being into the gear that drives it. Being a total gear head made this year amazing. So many innovators and creators of gear that we use regularly and also so many amazing acts that use it. It was awesome to see Kraftwerk and MIA and also to re visit some acts we've seen in the past like Flying Lotus and The Gaslampkiller. Its great to see the town you are from come alive like it does for this fest.

Javier: Yeah! I mean, we met a cyborg and attendees were walking around with headsets which allowed them to create music and images through brainwaves. Using their own iPhones. And it wasn't even noon yet. Dan Deacon was checking ID's outside of a venue – ya know, just getting some light security work in.. That's the kind of festival it was. The artists and attendees were extremely happy to be a part of Bob Moog's legacy and I think everyone involved left inspired to create.

In making Palm Sunday what were some of the discussions the two of you had regarding the direction of the music and the record as a whole?

Javier: We were trying to make Palm Casual 2 – a sequel to a free ep we put out in 2010. The idea was to pay tribute to some of the music we loved from the 80's and 90's especially soul RnB and pop stuff and just have fun with it. We found we had a ton of material and as we started tracking demos realized some of the songs were a bit more in depth and that this might be more than a fun tribute record so we decided to do a full-length and call it Palm Sunday.

Since we're debuting “Stay Wavy” what can you tell me about the crafting of this song in particular?

Cliff: Stay Wavy began like most of our songs by sampling/chopping some bass and keys off of some dug up vinyl using an MPC. I remember the feeling of writing the lyrics. I just wanted to get my point across that you can do anything you want. And that people are free to choose for themselves. Maybe we should stop paying attention to what we've been told to do for so long and make our own decisions about OUR lives. When it comes down to it if we are not in charge of then who is really?