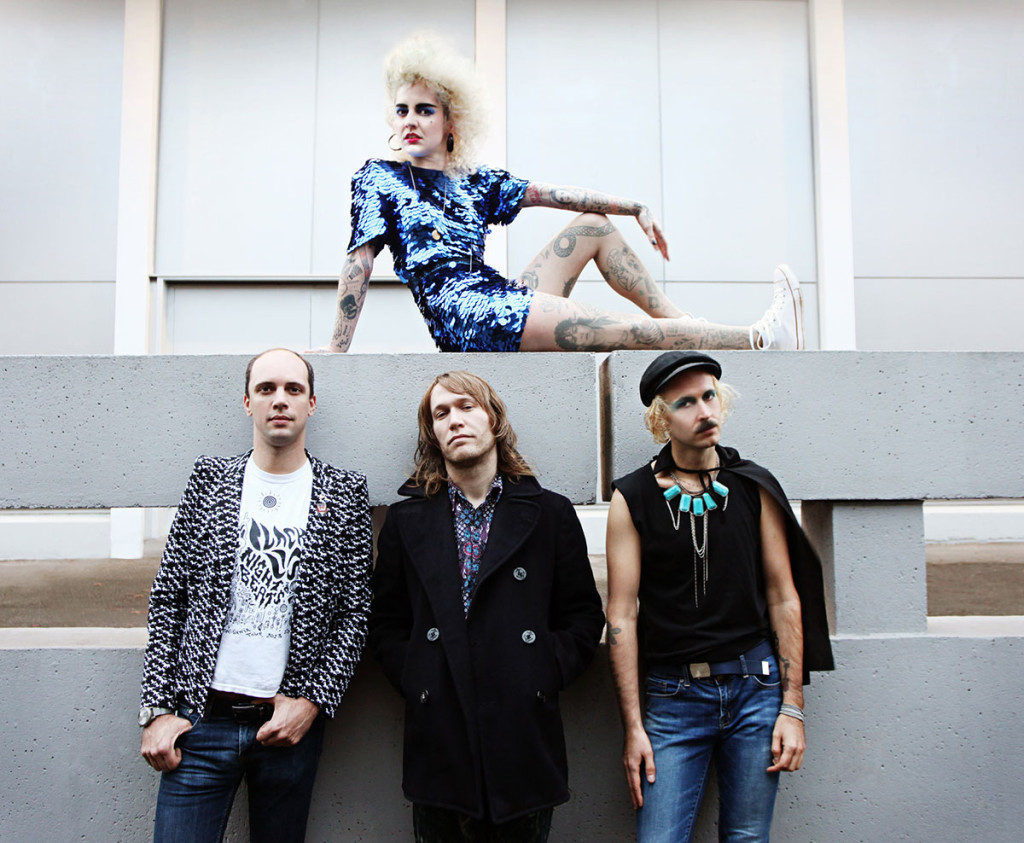 We knew Seattle’s Gazebos had made a sparkler of a record when we premiered their first single, “I Don’t Wanna Be Here”, back in November. Still probably best described as “glam no-wave,” Die Alone, Gazebos’ debut, is full of energy, dissonance, and strong yet personal perspectives. It’s hard to pin down into traditional punk and garage subgenre terms, which is what makes it so exciting. And, though there’s a lot that’s directly confrontational about Die Alone‘s aesthetic and messages, nothing about it feels schtick-y. There is an ease and honesty (and a playfulness) to it that feels like a sigh of relief in a world of forced and rehashed ideas.

Die Alone will be available February 19 on Hardly Art. Stream the full album below, and read on for our interview with singer (and tattoo artist) Shannon Perry and guitarist (and karaoke host, and GGNZLA Records owner) TV Coahran for a little more insight into Gazebos’ world and lives:

What brought y’all together?

Shannon Perry: We’ve been friends for a long time, and also played in bands either together, or with each other’s other bandmates, or dated each other or our bandmates. You know, typical grew-up-in-the-same-area kind of incestuous music and social scene fodder. It was bound to happen.

It seems like there’s really a lot going on in Seattle right now, it’s neat to me that there doesn’t seem to be an overarching “sound” to the DIY bands coming out of Seattle these days (shades of grunge past), but the current scene seems to have some space for really distinct different voices. Of course, that’s just my outside assessment, do you agree? If so, can you expand on that a bit? If not, why not?

Shannon: I think that’s true for sure. There are a lot of creative people in Seattle, and creativity is infinite as far as what direction you can go. I think it’d be kind of boring to be doing the same thing as my neighbors. Moreover, if Seattle was still pumping out post-grunge 25 years and a generation later, that’d be kind of depressing. We’re not all coffee, space needles, rain and grunge up here. Actually, it’s mostly techies.

How would you describe Gazebos’ ethos?

Shannon: Now that I have Googled the word “ethos,” I think our ethos is probably more of a conglomeration of things than a singular feeling. I can tell you that I generally use the band to attempt to talk (or sing) right into the audience’s faces and force them, for a moment, to think about the feelings that slip through the cracks while we go about our day to day. I guess I’d like to see if I can get them to be present in the room with me, even if just for a moment. It helps me deal with my own general existential crises if I’m able to shake people up. I’m not sure if I’m using “ethos” correctly, but that’s generally how I feel about being in the band.

And how about your aesthetic?

Shannon: The visual aesthetic is the same as our ethos or impetus; it’s a patchwork quilt. We’re all sort of weirdos in our own way. The sound and vibe that we make is 1+1+1+1 more than it is 4, if that makes sense. I can’t speak for what the boys like, I just dress the way I dress. The wacky outfits I wear on stage are the same thing I wear to work on Monday. I have a tendency for theatrics, and the older I get (I’m 34 now), the less I tend to care about what anybody’s going to think about what I wear, or if I’m covered in tattoos or what. It’s not curated for the sake of the band, it’s natural and compulsive.

Do you think ethos and aesthetic have to match up at all?

Shannon: Nothing has to do anything.

Are there any bands you really hate being compared to?

TV Coahran: Not yet, but we do get compared to a lot of bands with masculine/feminine sounding singers (B-52’s/Suburban Lawns/X/Nuns). We love all these bands and they are likely influences but I wonder if we get these references because we sound anything like them or just because we have guy/girl vocals.

Shannon: Actually I’ve felt pretty lucky so far. I’ve mostly heard us compared to bands that I like or respect! But our album isn’t out yet, there’s plenty of time for bad comparisons in the future.

Anything you want listeners to know going into the “Die Alone” experience?

TV: Die Alone was recorded in my basement on an 8-track Tascam cassette machine by Kurt Bloch [of The Fastbacks]. Kurt Bloch IS Seattle music to me and he made our record sound REAL good.