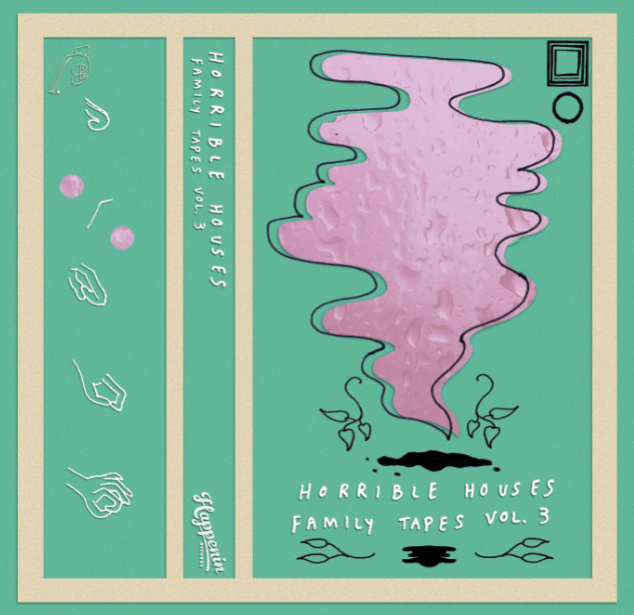 When we first brought you Horrible Houses' single “Sun Leaving“, it was only the beginning. Särna, Sweden maverick Daniel Johnsson keeps a very elusive air about his sound, and after you hear Family Tapes Vol. 3, you too will find yourself talking cryptically about this homemade labor of love. Available now from iTunes with the cassette coming in mid-December from rising indie imprint Happenin Records; we are pleased to bring you the first listen.

Opening single “Sun Leaving” is a lo-fi wonder that puts Daniel Johnsson's name amongst kindred cousins standing Stateside like Tim Presley, Ariel Pink, Jackson Scott, and so forth. Solidifying this sound indebted to the vintage amp glows is the “I caught you smiling” charm found on, “Reruns of Zorro”. The ghost of Gene Clark inspired guitar riffs chime as if Roger McGuinn and The Byrds were still one big happy band-family. Cleverly enough, these are not just reruns of “Zorro”, but this is brilliant outright revisionism of all the vinyl and cassettes your parents got weird to-with the AM radio on. “Death Trip (Outskirts)” enters the chasms and strange of lysergic nostalgia, recalling looping leftover Arthur Lee tapes until Daniel gets into the lower-fidelity-contemporary-cool with every utterance of, “cry baby cry”.

After tending to the droning requests of Satanic majesties; “Courtyard Dweller” brings a countryside classic that could be the swan song of Horrible Houses. Loosening the gritty gauze found on many of the other tracks, “Courtyard” shows off Johnsson's brighter guitar abilities that must have George Harrison smiling down from somewhere. Then the tapes returned their sun kissed and warped state as “Haddonfield House Jam” keeps things out in the country with interspersed hop-along moments placed between the bent belt guitar strings. “Francoise” is gorgeous. Stunning in a way that sparkles in a ways that bring big words like guitarist virtuoso to mind, with found sounds of idle play that bring back tire swing memories from years ago. “Sleepy Head” mimics the feel of lazily waking up at noon, borrowing riffs from olden NYC undergrounds to make new velvet steeped sounds with the viscosity of Velveeta.

But then before you can pin Horrible Houses in one era alone, Daniel turns the tables with “The Castle (Garbage House Sunset)”, that sounds like a vague indie rock homage to Franz Kafka with the council of shambling estates intact. With commercial sample loops, psychedelic fragments from “Sun Leaving” and shouts of “eat shit and die”; the next trip begins with the aggressive, cannabinoid receptor-burner, “Hashashin”. As the stoner-dad rock chugs along and gets far out to it's wah-wah electric wails; “Let's Listen To Coconut Hotel” brings a bit of garbled gold and romantic escapism that moves with a mechanical wanderlust beat. Closing number “October 1985” brings it all back to the mid 80s. Daniel here does a Back to the Future, and makes himself an honorary member of the Paisley Underground scene and just plays it just the way he wants, keeping the indie 80s DIY spirit alive for 2013/2014. Family Tapes Vol. 3 is an audio heirloom photo album you won't forget anytime soon.

We first talked to Daniel Johnsson around the premiere of “Sun Leaving”, and just a bit earlier we had the chance to exchange some more cables to get deeper into the taped out terrains of Family Tapes Vol. 3, discuss the persistence of the cassette medium, Särna, Sweden influences, and more.

Tell us more about the alien and familiar dimensions of Family Tapes Vol. 3.

Well I guess like most people, I have different periods when it comes to my music intake. For example, one week I can listen solely to John Fahey and end up wanting to record an American Primitive record and the week after that I'd maybe listen to Les Rallizes Dénudés, be all hot and bothered with their greatness and record some insane feedback guitars. And I'm not really a fan of records were all the songs have the same sound to them, I like to be surprised, and I do not wan't to be confined to any specific genre. I try not to stay put. Maybe that's where the alien but familiar feeling is coming from. Am I making any sense?

How has your environment of Särna, Sweden informed your work?

To tell you the truth, I don't know if it has had that much effect on my songwriting. I wrote and recorded these eleven songs in an kind of isolated state of mind. I guess they could've been written anywhere, it just happened to be in this little town. But I must admit, some of my best ideas usually come while I'm out walking the surrounding woods or watching TV-4 Guld late at night, the latter spawned the song, 'Reruns of Zorro'.

If you could invent the name of a genre for your music, would what it be?

Why do you feel that the medium of tape has prevailed and is enjoying such a resurgence?

I guess it's because they are relatively cheap to produce, they look good and sound even better. It's retro, some people dig that. I'd still probably be using my Walkman if it wasn't broken. And oh yeah, they're cheap to post as well, that helps!

Besides doing a couple of shows i'm working on a album that I will be relasing under my own name, more of a mellow folk record, still horribly recorded though!