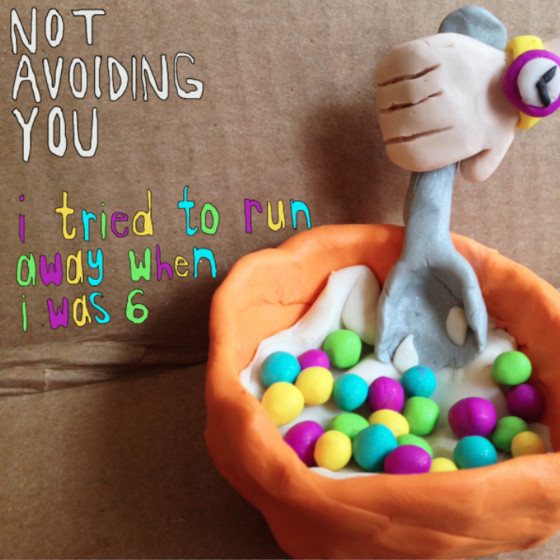 I tried to run away when i was 6 is the project of Domenica Pileggi who, until recently, was based out of Hudson, New York. Earlier in the summer, Pileggi moved back to Philadelphia where they grew up, and their new album Not Avoiding You explores this frightening and exciting period of change. Out August 28 on Miscreant Records, Not Avoiding You is i tried to run away when i was 6’s first “official” release following a series of Bandcamp EPs, splits, and now-deleted demos. For those who have followed Pileggi’s music, Not Avoiding You will symbolize growth, both musically and personally; for new listeners, it will act as an introduction to one of the most humble songwriters around.

Not Avoiding You‘s opening track, “Do U Want Me,” introduces us to Pileggi, who is quite honest with their insecure adoration (“I don’t talk a lot / Leave myself to rot”). The second track, “Moving,” sets the stage for the themes the album explores: changing locales, relationships, and creature comforts. In a singsongy voice, Pileggi tells us of their decision to move home and their hopes for positive relationships and happiness. In their past releases Pileggi has stuck to guitars and drum machines, but Not Avoiding You features bass, drums, and cello. The magnificent effect of these instruments is perhaps most evident on “June July May,” a heart-wrenching track about sacrificing material goods for friendship. The rest of Not Avoiding You is available to stream below!

Not Avoiding You is out August 28 via Miscreant Records and is available for pre-order the tape here. We spoke to Pileggi about the origins of their project, Not Avoiding You, and giant tours!

How did you begin playing music and writing songs?

I have been playing music to some degree for almost my whole life in terms of taking piano lessons or being in the middle school band and stuff like that but I never wrote my own songs or stuck with any particular thing for too long, I just enjoyed jumping around and getting a basic understanding of every instrument I could as quickly as I could. I didn’t write a song until I released my first “EP” in February of 2014. I wrote all 9 of those songs in one night after I had spent the few months before that dealing with being newly diagnosed with an auto-immune disorder and battling with treatment which left me halfway between inpatient care and my bedroom. I didn’t really have anything to do to be honest, I couldn’t work and I had dropped out of school the year before so I just had free time literally all of the time. I don’t like to say “I was bored so I picked up a guitar and this is what happened” but that is kind of how it went.

A few of the songs on Not Avoiding You (including the title track) made appearances as demos on May(be). Can you talk about how their sound has grown from May(be) to Not Avoiding You? Also, about all the new instruments that are on the new record!

May(be) was a bunch of demos. I wrote and recorded those songs really fast, and they were almost all 1 (2 at most) guitar tracks and a couple of vocal tracks done in one take and then thrown into the depths of bandcamp. I liked a few of them enough that I was willing to work a little more with adding other guitar parts, using some pedals, adding more harmonies – whatever I felt like I could do to take them from demos to actual tracks. I added bass on a few tracks as well and my pal Andrew Littleton helped me out with drums! Also, my roommate Robyn Bonacci played cello on some tracks. I had just moved in with him while recording this album and he is a classically trained cellist so he wrote some parts for some of the songs! The title track Not Avoiding You was actually on that first EP I wrote in Feb 2014! It was one of the first songs I ever wrote. I feel like any time I make a real release I include one or two of those songs, they mean a lot to me.

What are some of the themes that appear on Not Avoiding You?

This particular grouping of tracks are all about my friends. Most of my songs are about my friends I think. There are maybe one or two songs on this album that come from a position of confidence and were written surrounding my move back to Philadelphia where I grew up and had been away from for 5 or so years – so it was exciting and I really couldn’t wait to be back with everyone I missed so much for so long. But I’d say the majority of them are quite the opposite – they hold the same message in terms of how much I care about the people around me but they have a lot more to do with me being worried that these people don’t feel the same way back. I’d consider all of these songs platonic love songs in some sense but the general theme seems to be leaning more toward the “unrequited love” I guess, which probably isn’t even really the case its just me outing my biggest insecurities – me unintentionally pushing away or disappointing the people that mean the world to me.

Recently you went on a big west coast tour with Katie Bennett of Free Cake For Every Creature – whats are some things you learned from the experience?

I did! It was so so incredible…. but also probably the scariest thing I have ever done in my life. I am so lucky that my tour mate was Katie because she is already a really great friend of mine so it was easy to have conversations about what we were thinking and how we were feeling. I think the hardest parts of tour were the aspects I overlooked, like I knew I was going out there and playing shows and sleeping in unfamiliar places every night. I did my best to mentally prepare for that and other than 2 or 3 shows that I was so unbearably tired for and regrettably kind of went through the motions of playing with the “lets get this over with” mentality as opposed to being excited and taking it all in, those aspects of tour went pretty smoothly. I think the main thing I overlooked or forgot about was how exhausting socializing every single night for two weeks is! That is meeting new people and often getting asked the same questions/telling the same stories/having the same conversations…every….night. I have horrible social anxiety to begin with so it was really really hard for me. What was even harder was not having a home base resulting in being in the public eye literally all of the time. I am personally a homebody, I go out when I need to and otherwise I like to be in my house with my dog.

Being seen all of the time became frustrating and uncomfortable but is was bearable for the most part until our last day of tour. Since we weren’t crashing anywhere that night we had all of our stuff with us and were walking around with guitars and suitcases and sitting in coffee shops with all of our stuff. We got a lot of weird looks which is fine (I guess) but it quickly evolved into straight up harassment. That day multiple men stopped us, followed us, or called us out to talk about “what kind of guitars” we had, or “what kind of music we played” and if we no matter how we responded be it an honest answer or not even looking up from our phones or books we were mocked and made fun of. Some lady took a picture of me at a Starbucks. Some guy followed us for half a block playing air guitar and asking us to sing him a song. Another guy screamed “Losers!” at us when we said our ride had arrived and we had to leave. It was fucked up. It was fucked up because this was only happening to us for carrying guitars and not being men. I don’t think anybody would stop some dude carrying a guitar on the street and play 20 questions to see if he deserves to carry an instrument or play music. It was absolutely infuriating. We had been in pretty safe spaces and supportive scenes as far as the shows we played along tour, I kind of forget sometimes that its a big deal to be anything but a dude in the music scene but shit like that quickly reminded me that what I’m doing isn’t necessarily taken seriously or respected. It was weird. I’m thinking about it all of the time now and becoming hyperaware of how people speak to or about my friends that also make music and are not cis dudes. Its really bizarre and upsetting.

Not Avoiding You‘s album release is September 1 at Palisades, featuring Florist, Free Cake For Every Creature, and Beverly Tender.