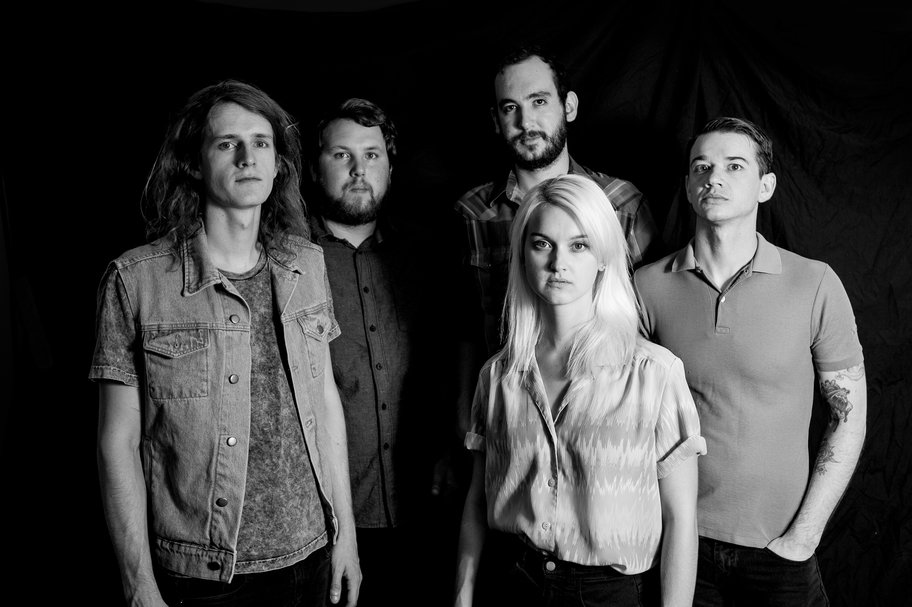 Following up February’s Cat Calls EP, Young Tongue premiere an early listen to their full-length, Death Rattle. Formerly known as The Baker Family, the Austin quintet of Stu and Liz Baker, Nathan Ribner, Darryl Schomberg II, and Travis Larrew keep the family values intact with a nurturing vibe as part of their first and second natures. With Death Rattle available November 11 as a joint release from Punctum Records and Raw Paw Records, Young Tongue utilize all feasible items of instrumentation to rouse the creatures from both land and sea.

Opener “Horses and Whales” thunders with Stu and the band’s galloping delivery, tempered and tamed by Liz’s peaceful piano-kissed notes. Reflecting on the wasted time from the amphetamine trails of past addictions and dilemmas, “RXNLA” rolls over to new episodes with a renewed zest for life on, “Heavy Metal Thunder”. The hour glasses of life and time are inspected in loving detail on the comforting and nurturing, “Caveshare”, to the desert ballroom number, “Sand Dance”, that stomps up a sandstorm cyclone of dust and rambling tumbleweeds. “Cat Calls” discusses areas and arenas of identity ambiguities, trading tied-tongues for new beginnings on the blissful banquet of, “Birthday Rats”. The album careens down the circadian rhythms of visions that make up “Nickelodeon Dreams”, before the album goes full circle on the closing song, “Matriarch”, where distress and perdition dissolves as all is carried away on the wings of an ascending angelic sorority. Stay with us after the following exclusive album as Stu Baker gives us a candid look inside the world of Death Rattle.

What was the road of readying, writing, and recording, Death Rattle?

Death Rattle has been an album in concept for a few years. Some of the material, like the bass line and guitar part to “Horse and Whales” on it dates back almost 10 years ago when I was in high school. Other songs like “Birthday Rats” and Sand Dance” were written this year. The album captures a transition of song-writing methods we’ve used. In the past, I would typically write a song and almost all its parts, show it to the band, and they would put their spin on things. We started writing songs from scratch communally during the making of this album. Some of my favorites were written this way, like “Caveshare,” “RXNLA,” and “Heavy Metal Thunder.” For us, this seems to be a healthier way — we can feed off of each other’s ideas and the songs develop a more three-dimensional element. I’ve always felt that ‘writing’ songs is more like ‘finding’ songs; Young Tongue is the search party.

Recording was awesome. We all appreciate honesty in music, so inhabiting the songs was important to us during the process. Most of the songs were recorded with Austin-based engineer, Kevin Butler, who contributed a ton to the songs he recorded and mixed. Making the album has been an incredible communal experience. We worked with other very talented engineers: Travis Kennedy, Jas Nowicki, Carey McGraw, and Andrew Hernandez.

How did you two first meet, connect, and then realize that you had a musical chemistry as well?

Liz and I met when we were young teens in Juarez Mexico on a trip to teach ESL and help a community build a school. I am from North Carolina, and she from Texas, so there was some differing geography built into our personalities that probably made us more interesting to one another. As teenagers, we connected primarily on an emotional level first, some of that was due to common tastes we had in music like Depeche Mode, Talking Heads, and Sigur Ros. Sort of cliche, but I showed her Radiohead and that became the strongest musical bond we had. When I started writing songs in college, we were spending all our free time together. I would show the songs to her, and she was a way better singer than I at the time, so I’d ask her to sing. She would sing me these lullabies like “Tea for Two” and “Like a Ship” and that would totally kill me. I gave her a notepad to start writing her dreams in, and took a lot of lyrics from that at first. It’s always been a very easy and natural thing working together; just being with each other is so effortless compared to working with or being around most other people.

Was “Caveshare” inspired by some sort of updating and modernizing of cave dwelling days to the contemporary conveniences and luxuries of time shares or anything AirBnB related?

Haha, based on the title, I can dig that interpretation. The song, to me, was more about capturing an emotion than telling a narrative. It was inspired by a combination of things including my relationship with Liz, and her ability to calm me down and offer peace to me when I’m freaking out a bit. I was pretty chemically dependent for a few years, and this song came out in the middle of my ‘cleaning up.’ Really though, it’s a love song written to the universal loving force or whatever you want to call it — that thing that every living thing flows from; I don’t think it necessarily benefits from having a personality ascribed to it, but I personify it (or ‘her’) in “Caveshare” because I think it tells a cool story.

What’s the state of Austin these days? Is it as good, bad, not-what-it-used-to-be, and everything else that everyone says it is?

Yes, yes, I’m sure, and probably. My personal opinion is that Austin, like every city is sort of its own organism. And like every organism, it has a birth, initial growing phase, peak, decline, and inevitable death. Where Austin falls on that scale I cannot say, but I do know that every generation romanticizes the past and how much better things were 15-30 years ago. I think there are exciting things happening in Austin, and that some of the best music from Austin is happening now. It’s impossible to measure objectively because we live in a time where the music industry feels like the artificial pacemaker its been hooked up to the past 10 years is running out of batteries, and being in a band in Austin can sometimes feel like being a needle in a stack of needles. So yeah, there were great things about Austin a while back that simply can’t exist in our contemporary age, but there are amazing attributes about it now that couldn’t have existed back then. It’s hard to try to convey the sense of community and support we have here, but it’s awesome, and we all love it here.

Favorite local Austin artists you both have discovered as of recent?

We love and look up to Nicole and Sam a ton, and have felt drawn to them since we met them in Chicago in 2009. Since then, we’ve played several shows together, crashed on each others couches, and talked about touring together some day. When they asked us to go on this tour with them I ran around our small apartment, jumped on the bed, and screamed into a pillow. So besides getting to see Mr. Gnome play about 20 shows, we’re stoked about seeing beautiful parts of the country we’ve never been to, meeting new people, forging new friendships, and growing closer as a band.

Young Tongue’s album Death Rattle will be available November 11 as a cooperation between the Austin-based imprints, Punctum and Raw Paw Records.

Catch Young Tongue on their tour with Mr. Gnome via the following dates: