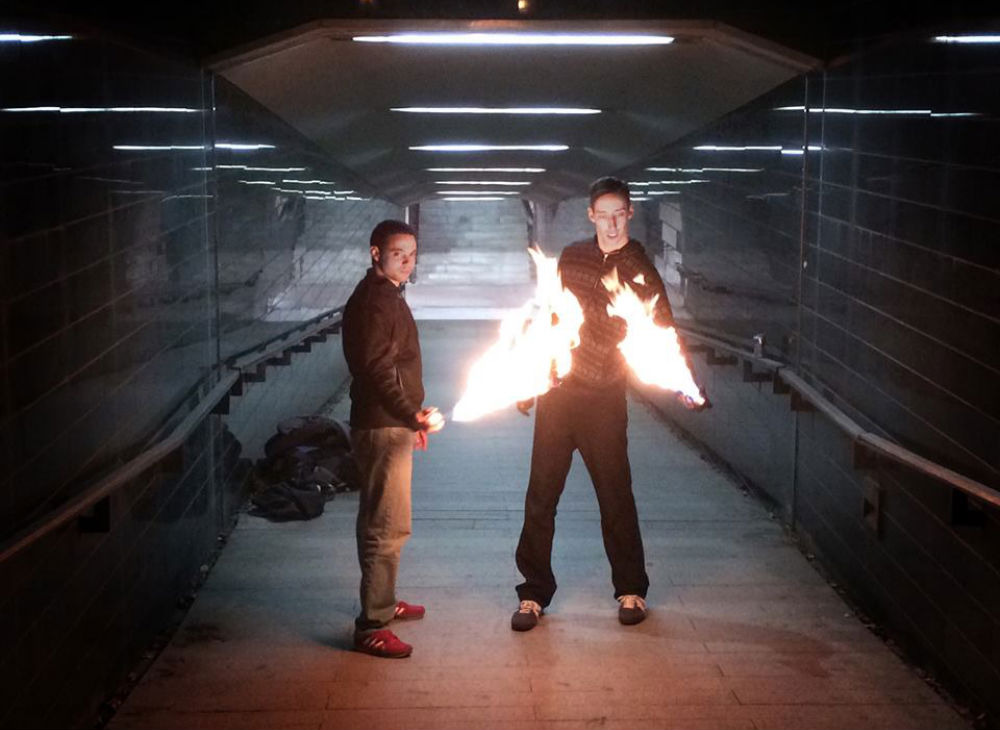 Despite their current Seoul, Korea base, Ssighborggg’s Nor Cal roots can be heard all the way from this side of the Pacific. Comprised of guitarist/keyboardist Sean Maylone and drummer DeAnthony Nelson, Jr., the outfit takes sounds typically associated with math rock and electronica and cross pollinates them to make something Sean appropriately dubs “electronic math rock.” Imagine the musical bastard child of a menage a trois between Battles, Plaid and Hella. He goes to school dressed in full uniform and knows all his geometry proofs, but he’s hip enough to edit his own zine tracking street culture in Seoul.

But if that anthropomorphized version of Ssighborggg’s sound doesn’t exactly clue you into their sound, then watch the video of them performing “Bring It,” and read our interview with Sean, both below.

Since I don’t know all that much about Ssighborggg, tell me more about it. How did you guys get together, and how did you arrive at the synth-laden math rock that you guys make now?

I wrote the music a ways back with some kind of math rock friends of mine. We got banged into all this Warp Records stuff and wrote songs as pure electronica. I didn't like performing it as pure computer jams so we started live instruments again. This new drummer is an awesome kid I met here and we've been pushing each other to hit harder.

It's a mouthful. DeAnthony Nelson, Jr.

Pretty sweet name if you ask me.

Yeah he's the weirdest, funniest dude—super good at keyboards and drums. I don't think he knows anything about like “indie” music, but he can play a ton of Stevie Wonder from memory and always sings Boyz II Men.

I wish I could say I heard that coming through in the music, but that's a wacky translation. The closest thing to a super-bullshitter-music-critic connection I can make is that he has an awesome sense of groove. Was danceability an intention at all?

That “Bring It” song isn't as danceable as I like. To me it sounds like a nu metal song against the other stuff; when he does the improv section at the end he tingle-tangles the ride and hi hat in his jazz style.

I mean I think there are some pretty good moments on there for some dancing. So is “Bring It” more on the math-y side of the spectrum of Ssighborggg? In other words, are you trying to get people dancing like Battles get people dancing, or are you going for full out late seventies Soul Train dance party stuff?

I'm not sure. We do improvisation on the tail end that’s maybe a bit bouncy, but our other stuff probably has less like barbeque grill guitar distortion. This isn't the full recording with real drums and guitar, but the songs like this are super cutesy or hoppy:

Is the upcoming record going to have more stuff like “Hyperion”? Or is it going to sound more beefed up like “Bring It”?

The final recordings will have the snap of “Bring It”s live instrumentation—this “Hyperion” is the “in the computer” stuff I was mentioning before. So some kind of hybridization—I want to play some darling, cute progressions really loud and heavy…Fuck, I wish I had a live clip of “Hyperion” to show you. The chorus parts have like bass synth and guitar chord tapping at same time.

Okay yeah I totally get what you mean—do you think that sound was influenced by being in Seoul at all? I definitely hear hints of that super sugarcoated, electronic K-Pop sound in there.

Technically I wrote a lot of this music stateside, but you can totally freely infer that on your own. I have warmed up to K-pop recently, not at like expression, but just style.

I mean art's all about how you interpret it right? Though I’m just bullshitting at this point. Okay, real question: You’ve compared Ssighborggg’s sound to Battles, and you seem to have adopted Ian Williams’ technique of playing the guitar and keyboards at the same time. How did you arrive at that decision? Was it made with Battles in mind or was it necessitated by Ssighborggg’s status as a duo?

WIlliams is a huge inspiration—the dual technique is partially because I like the timbre as Caribou and Battles use it, but mostly because of being a duo. De will probably get a synth in reach soon like Wye Oak and Make Believe's drummer. I think the Boredoms kind of have every stage member with like their own full percussion/electronics/melody setup—I'm stuck on sounds like that.

Well, they're all about that flooding of the sense thing through the sheer amount of sound that they produce. Are you going for that, then? A sort of wall of sound?

Yeah, or maybe that Hella, Lightning bolt go-to of like “a lot of noise for two boys” relativism?

Oh wow I love that as a genre classification.

Yeah, like who else is in there? Death From Above?

DZ Deathrays kind of have it.

I like a “boys” specific genre especially—turn around of grrl rock.

Fighting the patriarchy one incredibly loud boy band duo at a time.

We tried to find the last angle of a triangle, but it’s hard out here to find a skill set like plays bass, does keyboards and looping. Plus managing schedules would be hard.

Yeah, I know all that stuff's tough. One last question for the sake of the interview: How'd you get hooked up with Gold Panda's label, and what's the future of the group looking like?

I met Derwin [Schlecker] when I booked him here before. And then on his second visit we opened and talked after about the next few recordings—doing vinyl and digital on Notown. We get along pretty well in terms of humor and tastes. He’s all into Kettel and Plaid, of course—that was the stuff that moved me into liking electronics. I think we are going to tour stateside and get into vocals/video art as soon as possible. I’d love to make and score a film in Korea.

PrevPreviousStream: The Difference Machine, The Psychedelic Sounds of the Remix Machine
NextSky Ferreira, “I Blame Myself” (Negative Supply remix)Next