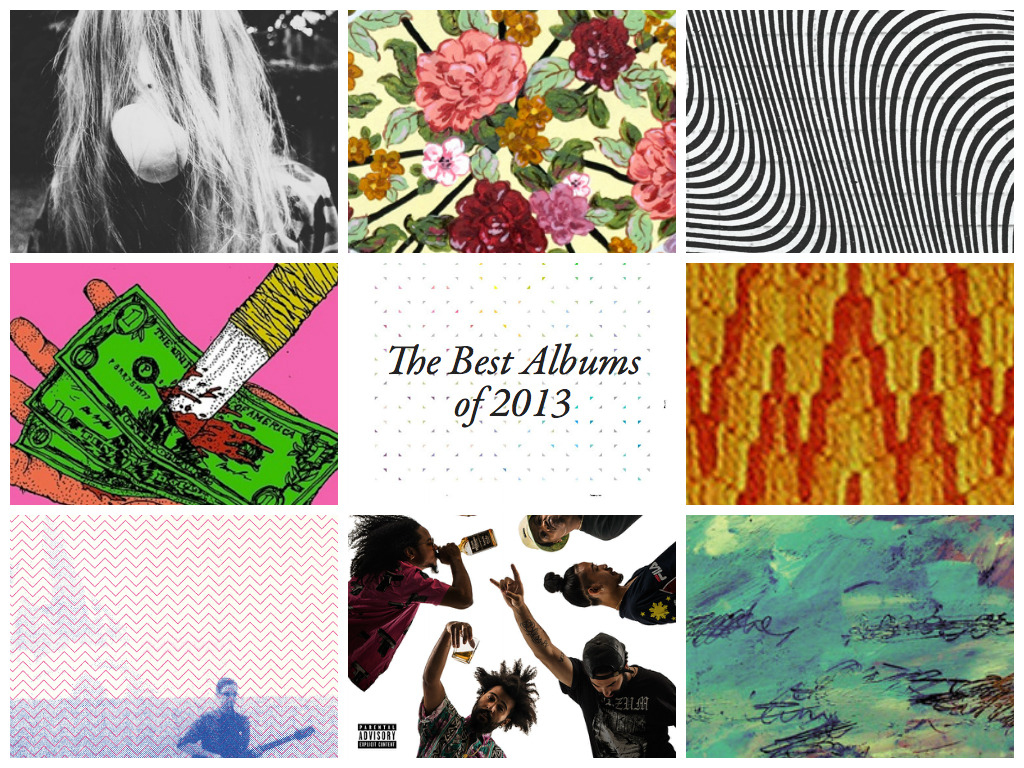 Due to some ungodly happenings in 2013, this was a year that we'd like to forget—forever, if possible. With no shortage of Miley Cyrus, Morrissey, or SkyDIIV news to report, it seemed like the unlucky number 13 was out to get the best of us, no matter how hard we tried to stay Roggenbuck-#posi. The saving grace, as always, ended up being whiskey and sleeping pills the music and we're happy to say that we made it out alive, thanks entirely to the fifty albums we've compiled for you here. This time around, after finding it harder and harder to hierarchically rank what we considered to be some of the best deliveries of 2013, we took a new approach: below, we've got our top ten for you (meticulously deliberated and argued over into the late hours of the night), and then the remaining forty in an unranked slideshow. But these aren't anything but numbers—all fifty of these albums challenged us, changed us, and helped us sleep in the year that was. 2013, you were a piece of work, but thanks for the good times anyway.

In the tradition of 60s girl-driven surfpop, La Luz’s debut It’s Alive exhibits feminine camaraderie, retromania, and a spirited knack for vivid songcraft. On several tracks from the Seattle band’s debut, the ghostly vocals and shaky guitars make a storyline that is not unlike a throwback horror classic—that is, if the protagonist were a surfer. The highlights of It’s Alive aren’t just in its eeriness, though—you can instinctively hear in La Luz’s songs that they are a tightknit group of women who have found the sweet spot for crushingly listenable vibes, shake-em-loose danceability, and jangle joy that has the cleansing properties of the ocean.

Following up his 2011 album Daydream Repeater, Baltimore’s Matthew Papich reveals that his mastery of making teleporting, overt landscapes of artful sound is alive and well, if not more nuanced this time. On Moody Coup, a record whose language is more Martian than human, Co La flummoxes his listeners by structuring songs around untrustworthy rhythms, bopped vocals, and sounds that catapult between the realm of the digital and the world of the extraterrestrial. Improving on his debut by building the hi-end of his sound, Co La’s second album was not only unique in all the right ways, but practically paranormal in its quality. Do not intake through shitty earbud headphones.

If you’ve been planning on taking a tropical vacation all year, but haven’t had the funds or the gumption to cement flight plans, Return to Paradise is a record that cannot be missed. Colorful and lush in a variety of tones, Monster Rally has found a way to make breezy, dancy electropop that imagines a catalog of nature photos in National Geographic if they were stitched together with keyboards and samples. The result is as diverse as the jungle and as international as a one-way flight, jetsetting the listener to lands afar without feeling like a misstep in cultural robbery or tourism. There is more natural here than might initially be suspected, and its greatest reward is in learning that Return to Paradise makes you breathe deep without your even knowing it.

Yonkers-based musician Ellen Kempner may have been too young to fully appreciate the early Martsch oeuvre as it was happening, but her Bent Nail EP would certainly attest to otherwise. Her songwriting is sharp and quick, utilizing atonal guitar lines to push her Kim Deal-style vocals through each song, and with lyrics that lay bare emotions that struggle to reconcile ego with id, Kempner is as wise with her words as Liz Phair. The Bent Nail EP doesn’t exist entirely in a decade longsince past, but it channels new, relevant worries—“Vandalize my body if it helps you sleep”—through distant filters, making the six tracks feel at once present and removed, which is any artist’s most sought-after accomplishment.

The joy of listening to Nonfiction isn't in the sonic calm before the storm, but in finding the calm within the storm. “Hamiltonian” captures this aural tug-of-war perfectly, its dramatic piano and strings providing solace from the skipping drum samples and fallout shelter sirens. The isolated hi-hat taps and minimal footwork structure of “Seneca” unfolds into a flurry of gale force breaks that could tear the song apart if it weren't for the strands of twinkling harmonies holding it together. With unbridled chaos and unmistakable tranquility occupying the same living quarters, The Range has created an album full of beauty and tension. Despite Hinton's acknowledgement of the sounds and subgenres that have come before Nonfiction, it still feels noticeably different from the work of his contemporaries, which says volumes about his abilities as an arranger and a producer.

World’s Fair still carries the chip for Queens. When the party dissipates, a skit offers a glimpse into the burden of partying with a Brooklyn chick and trying to get her to roll back for an after-hours gathering in the Northeast borough. She concedes to join them, but on the drive things go sour, and the crew leave her cursing the bumass Queens crew on the side of the road. The album ends with “Blacklisted” which sounds like it's being delivered from a rooftop looking at the Queensbridge over the night's last beer. By title alone “Blacklisted” expresses a contempt for how the rest of New York feels about the kids from Queens. With not much changing for World's Fair since Queens… Revisited—in outside perception and the group's mentality—Bastards Of The Party feels like the classic tragedy in which the outsiders are too damaged in their disdain to do good.

Etc. feels not at all like a collection of B-sides, but instead a photograph of sonic bits and pieces that fit together like an instrumental, experimental puzzle. Particularly in Emily Cross's confoundingly gorgeous and challenging cover of Chris Isaak's “Wicked Game”, you'll find that Etc. is a self-conscious title for a record that actually gives much more than it lets on. Tune in at the fifth track, “Stuart Beach”, to hear some gentle waves at the close of a minor-melody instrumental, and you'll be so captivated as to be entranced. It's experimental and lilting and full of immaculate depth, and does much to serve Be Good (Cross's debut full-length) as both a companion in tone but also a complement in exhibiting her skill as an aesthete.

Flailing, caustic, and confrontational, Guerilla Toss’s debut record, Gay Disco, shows none of the signs of timidity that typically come with a beginner’s output. Formed from members of the New England Conservatory, in a similar fashion to Nashville’s Diarrhea Planet (Belmont Unversity alums, all), Guerilla Toss decided to create a record that simultaneously challenged the notions of traditional music while also showing that music, as an abstract concept, can mean different things to different listeners. Gay Disco experiments with sonics, abrasiveness, and caterwauling delights that halt melody-driven pop songs with a burning-rubber screech. Not for the faint of heart, though impassioned enough to turn weak hearts to steel.

If Alex Zhang Hungtai had the egomania for it, he could better than us, but he was born in the wrong month, I suppose. His Dirty Beaches project broke loose with Badlands, which painted him as a leader of the pack type who fell victim to the same devil's deal that haunted Robert Johnson. He was pure rogue Americana and he took it to the stage. He'd stand alone in blue jeans and a white t-shirt, guitar slung over his shoulders, a singular blade of hair slicing down his forehead, and he was breathtaking whether you found it cool or sexy or macho or intimidating. But he'd end his set smiling, embracing a friend in the audience—whether old or new—and he'd be overcome with gratitude, the type a truly gracious smile cannot fake.

Hungtai could be a rockstar, in the traditional definition, but he knows the fate of it, like he knows the risk he'd run if Drifters/Love Is The Devil imitated the success of Badlands. In presenting himself, in his triumphs and his flaws, Dirty Beaches is free to evolve alongside the man. Hungtai is free to challenge us with a double disc of mostly instrumental wanderings and free of the pretension we'd assume had Bradford Cox presented the same album.

The Mallard’s sophomore effort, Finding Meaning in Deference, is doomed to be colored by the circumstances of its release. In April, after a rough tour, some canceled shows, and an increasing sense of disenchantment with her music, frontwoman Greer McGettrick announced that she’d be pulling the plug on the Bay Area post-punk outfit. The Mallard’s final show would be April 18 in San Francisco. Their final album would come out this summer, and that would be the last we’d hear of the band.

With all of this in mind, it’s hard not to listen to Finding Meaning in Deference as a sort of goodbye letter—or, for the bleaker-minded among us, as The Mallard’s suicide note, written on the cusp of implosion. There are signs that could point you in that direction—a song entitled “Just An Ending,” a darker tone than the group’s debut, Yes On Blood, and the Rorschach test provided by the album’s mostly unintelligible lyrics. But ultimately, the urge to read the album this way is a bit of a dead end. Sure, it’s the Mallard’s swan song (an “ugly duckling” joke here would be tasteless), but it’s also well produced, tastefully psychedelic, and contagious in the energy department. With the sonic decay at the end of the album, The Mallard throws down the microphone and storms offstage. McGettrick says she doesn’t see a reunion in the future, but as this album gets around, maybe it will become a case of Tom Sawyer attending his own funeral.