The Black Hollies, “Somewhere Between Here And Nowhere” 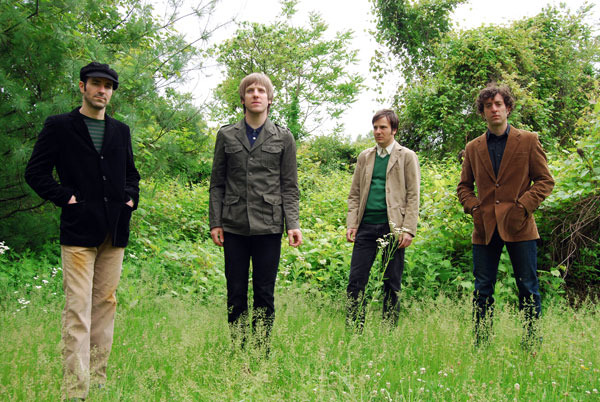 Justin Angelo Morey and The Black Hollies are back, premiering their title track “Somewhere Between Here and Nowhwere” ahead of the new album's release October 22 from Ernest Jenning Record Co. Joining up with his Rye Coalition bandmates Herbert Wiley and Jon Gonnelli accompanied by White Hills' Nick Ferrante on drums; the group is proud to present their sound engineered by Mike Moebius at Hoboken's Moonlight Mile studio full of analogue organs, pedals, amongst a plethora of audio enrichment devices.

“Somewhere Between Here and Nowhere” brings a natural singularity of cool that causes all the surroundings to disappear. “Over the under pass chasing the clouds, we'll be the only ones, let go of your attachments 'cause there is no one around, we'll be the only ones.” Justin and crew take the spaces between people and their world and calculate a new kind of shared gravity and discover new feelings and new applied meanings. That space between 2 individuals is explored like an organ driven rhythm ode to synergy while the “hey hey heys” chase the rest of the material world away, leaving the 2 to enjoy their shared moment within those spaces of happenstance that occur in those places in between people, places and things.

Eschewing the worlds of diamonds and surprises, the romantic sceneries of over and under passes becomes a playground wonderland for both Justin and his wife Ashley to exist within a world of their own exhilaration. Surrounded by the endless streams of automobiles, freight-liners, commuters and passersby; that special place that exists between where they are and the rest of the working world carries on is a portal of endless potential and limitless bliss. Or as Justin sings in the first verse; “Under the overpass down by the sound, we'll be the only ones, forget about your troubles 'cause there's no one around, we'll be the only ones.”

Justin Angelo Morey talked some big plans with us regarding what's next for The Black Hollies, the dream inspiration for the song “Somewhere Between Here and Nowhere”, recording studio reflections, and everything between here, now, yesterday, and tomorrow.

Where did the “hey hey hey” jubilation take form for the title song, “Somewhere Between Here and Nowhere”?

One evening I dreamt being inside of a dance club on the Jersey Shore. There was a song playing loudly in the background. The DJ would do that classic move where he mutes the audio from blasting out of the speakers for a second, then drops back into the groove. Whenever the DJ would do those stops, I witnessed the 'guido wink' first hand and the crowd on the dance floor would fist pump while shouting, 'Hey Hey Hey' over the break. When I woke up in the morning it haunted me and eventually I thought to myself, 'I can make this work and maybe have a 'Song Number 2' like Blur…'. But unfortunately on the cd, it's song number 5 and the vinyl version is 'Side D' .

How did you come to title both the album and song “Somewhere Between Here and Nowhere”? A metaphysical contemplation of place? An existential survey of self, perhaps?

In my mind the phrase Somewhere Between Here And Nowhere represents the exhilaration associated with being in love with someone. In regards to the title track, this composition is a love song written for my wife, Ashley Anderson Morey.

How had contributions from Rye Coalition and White Hills enriched the sound of The Black Hollies?

Aside from the permanent members of The Black Hollies, no other individuals from these bands have made any contributions to this album or previous releases. In the future, I'm not opposed to the idea of having all nine personalities of the parties mentioned above, locked inside a recording studio for 73 hours to produce something both fruitful and magical. Even though White Hills and Rye Coalition are completely different sonically and stylistically than The Black Hollies, it would still be highly interesting to see what would come out of the collaboration.

What have you learned over the past year or so of demoing and recording?

I've been demoing and recording for the past 25 years of life. From the chicken coup boom box recordings over on Cook Street in Journal Square, to Electrical Audio with Steve Albini in Chicago, to Sound City in Van Nuys with David Eric Grohl, to my nephew Jack recording me with his answering machine recorder over in Avon, and everywhere in-between.

I'll tell you this, if you want John Anthony Gillis to produce your upcoming LP, you probably shouldn't attempt scaling the large stone wall to his grand estate over in Oak Hill, Tennessee.

According to Merriam-Webster, the word 'Next' can be an adjective, adverb, preposition or a noun.

Predictions and plans for 2014?

I'm feeling Nova Scotia at the moment. Perhaps live performance tapings on the following: Daly, Fallon, Letterman and if the group is really lucky, Crook and Chase. It would be lovely to collaborate with Dan Auerbach…or Bob Dylan.

The Black Hollies new album Somewhere Between Here And Nowhere will be available October 22 from Ernest Jenning Record Co.