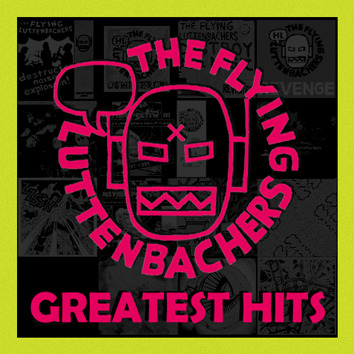 “The title should be Greatest This or Greatest Shit or Greatest Hist. Or Greatest Sith or Greatest Isth or Greatest Htsi or Greatest Tish,
not because THE FLYING LUTTENBACHERS never had a hit — 'Pointed
Stick' would qualify having been yell-requested by many an Azita
Yousseffi-contemporary in beer-soaked conditions (despite their not
knowing the title it was the one they wanted) — but because they're
not nearly pedestrian enough for such a generic title, particularly for
this valuable NECESSARY retrospective (PROLE, prehaps, but NE'ER
pedestrian).

In fact they are eponymous un-pedestrian;
these LUTTENBACHERS are FLYING (no surplus of pyrotechnics would be
sufficient to distract you from this obviation), vitriol and moxie is
their means of staying airborne. THEIR INSTRUMENTS (duct taped, plastic,
threadbare, sharpied, weathered, found, abused even before being
performance-mangled and then tour-battered and further compromised by
the classist conditions of the post-Reaganomics northern Midwest in
which a certain bandleader had to fairly abscond with high school
woodwinds to practice to THE DAMNED with only the most peripheral of
faculty permissions) ARE THE TIGHTROPE. Idiom and physical performance
ability is the void of bone-crushing space betwixt their vulnerable
sarcoplasma and the antipathetic floor of the audience that must be
vaulted at great personal risk when performing and that would be nightly
most nights when they were engaged in one of their many storied tours
both domestic and abroad.

Q: Anybody up for helming a
bloodthirsty quintessentially punk jazz squadron of chain-gang record
store escapees to plunder the creatively bankrupt wilds of central North
America on the ass end of this century past?

Q: NO?! Well, Weasel fucking Walter is up for it, YOU ANEMIC KNOW-NOTHING PUSH-BUTTON TWAT.

A: 'Weasel who?' you don't ask because you're obviously reading this (or rather reading this surreptitiously).

Q:
'YOU MISERABLE PRO-CHOICE-INVIGORATING TOILET-FEEDER,' I don't answer.
Weasel Walter, the modern composer who inspired the like-titled ZAPPA
album and who was plagiarized by said composer's synclavier work having
preceded it with his own electronic BOULEZ-with-strychnine-poisoning
modern-ensemble-simulacrum immortalized during his thorny
I-don't-need-to-spoonfeed-the-special-olympics-of-no-wave-saturday-night-live-band-member-understudies-period
when he really HAD HAD enough and decided to go it alone…I mean for
the sake of regional franchises (BEEF-A-ROO), WEASEL HIMSELF can barely
TEACH HIMSELF this disagreeably modern shit let alone some
disenfranchised HATEWAVE fan with a cocaine hangover.

The
lonely observers of his artistic arc agree: WE'RE SURPRISED it took him
this fucking long to do so, so when he finally did complete THIS (one
of at least several) MEISTERWERK, he exported it to the future and that
monobrowed Californian A-rab got the kudos (you got any gas money before
he returns to the present?).

Besides, what's the fuss
anyhoo. We have all agreed to agree with THE WIRE magazine — 'talent
ain't in your throat or hands (I'm plagiarizing an '80s skin mag
“article” called “ROCK HARD” here) it's between your legs' or in the
case of THE WHY'ER fagazine, YOUR WALLET.

This is NOT valid entertainment (unless I can have some of that LSD I left in his freezer); this music is DISTRACTING.

It
is obstinately rigorous, insists on being payed attention-to, betrays
the details of labor-intensive studies, knows who itself is, expects
quality to be celebrated, demands to be congratulated for being
demanding and assumes that it will be liked just because it often kicks
ass.

According to the stringently disinterested and
disinteresting trustafarian effluvium so prevalent in these ersatz
times, THE FLYING LUTTENBACHERS are NOT worth reviewing, and when
compared to the other acts which have their sartorial priorities wa-ay
intact, they pale in comparison because they seem unembarrassed by their
own caucasoid contours, testosteriffic formal trials and indefatigable
commitment to KILLER ENERGY MUSIC that manifests both epicurean avidity
to established musicological conglomerations and as-yet
fuck-all-undefined futuristic ambitions.

Just
writing this paltry puff piece I had to activate a somnambulant brain
center or three and this band makes me feel weak…….wait……('buh
ba-ba bum-Pa!')….EVERY FUCKING TRACK ON THIS BAD BOY IS ENERGIZING MY
TORPID ASS.”

Ladies and gentlemen, for your listening pleasure, The Flying Luttenbachers.

from Incarceration By Abstraction (ugEXPLODE) 2007

from Gods of Chaos (Skin Graft/ugEXPLODE) 1997

from The Void (ugEXPLODE/Troubleman Unlimited) 2004

from Infection and Decline (ugEXPLODE/Troubleman Unlimited) 2002

12. “Rise of the Iridescent Behemoth (excerpt)”

assembled and mastered on oct. 31, 2010 by weasel walter for pukekos.org

all titles composed by Weasel Walter, Sedition Dog Music (BMI) except where noted

The
lead-off track from the final, solo Luttenbachers album, released in
2007. Most of the songs on this album were composed and intended to be
performed by Mick Barr and Ed Rodriguez, but by the time the live unit
(then feat. Ed, the excellent Rob Pumpelly on guitar and fill-in bassist
Tony Dryer) played its final show on Nov. 1st, 2006, this vision would
not come to pass. Instead, I set about recording all the songs by
myself. At the time I thought I could continue the group, but Incarceration By Abstraction
would turn out to be an epitaph. In my mind, the creative
possibilities of the Luttenbachers project were far from finished, but
the financial and psychic realities of trying to realize complex,
rehearsal-intensive music in this era turned out to be an impasse I no
longer wanted to fight. What I've left behind is a sonic manifesto: a
true assault on apathy.

A
crowd pleaser from the second full-length Luttenbachers release,
recorded in late 1993. Some people have sporadically joked that this was
the line-up of the group “girls liked.” My writing wasn't terribly
sophisticated at this early stage, but i was doing the best I could to
mate punk energy, proggish riffs and free jazz skronk. The goal was to
get out there in the scene and do something different. At the time this
sort of punk/jazz fusion was still novel. People were psyched about it,
for what it's worth. The original pressing was an LP in an edition of
500 copies. Apparently 200 of them burnt in a fire at the plant, so
there are probably less than 300 total in circulation. The covers were
hand-assembled by the band and the front plate of each has some unique
phrase written under it by myself. I suppose you'd have to destroy your
copy to find out what it says!

The Gods of Chaos
album was released in 1997 and it was the most ambitious and
complicated group production in the history of the band. Although this
track is rather straight-ahead in approach, the rest of the album was a
true overdub and mixing nightmare of epic proportions, back when
everything had to be manually patched, muted, un-muted, faded, etc.
live on the fly. We spent a pretty good amount of time in a cold, empty
Chicago loft studio during the dead of winter, freezing our butts off,
trying to get this concept album about the destruction of humanity
finished. I was also mixing the Lake Of Dracula debut in the same studio
at the time . . . At it's core, “Cryptosporidium” simply mated Captain
Beefheart with De Mysteriis-era Mayhem (when Gorguts' legendary Obscura
album came out a year later and took this kind of ridiculous approach
to an amazing new plateau, we definitely felt like we were onto
something).

After the Revenge
trio broke up following a European tour in early 1998, I spent a good
amount of time experimenting with different combinations of a small
pool of players before deciding to concentrate on a heavily free-jazz
informed approach. The stripped down trio of myself on drums (sans
snare!), Michael Colligan (a previous member of seminal Chicago group
Math feat. Mr. Quintron) on reeds and Kurt Johnson (who also played
electric bass in the band Lozenge) on double bass worked very hard on
developing a cohesive group sound, utilizing sudden visual cues and
intensely discussing aesthetic do's-and-don'ts. Trauma was our
sole studio effort, a massive outpouring of searing intensity, released
originally as a double lp in 2001. Todd Rittmann (U.S. Maple) and Rob
Wilkus graciously helped us capture what we were trying to achieve with
the utmost clarity, engineering the session in the front room of
Michael's former venue/home 6 ODUM.

2005
was a difficult year for the group, mostly due to constant line-up
fluctuations and having to relearn or rearrange all this complicated
material numerous times with different people as a result. In late 2004,
Mick Barr had joined the band on second guitar, so we spent much of
that winter learning new material. The powerful new quartet debuted in
February 2005, playing a few West Coast shows before the three of us
(without Mick) embarked on a previously booked European tour in March
2005. When we returned we prepared for the Cataclysm album
recording in July 2005. In the meantime, Mike Green basically decided
that he didn't have time to rehearse and play in the live band for a
while, which left us to re-configure as another kind of trio (me, Mick
and Ed Rodriguez). Between June and December of that year we played
only a few West Coast gigs in this formation before Mick left San
Francisco to return back to the East Coast. Whew. You following this?
Before he left, we jammed out the Spectral Warrior Mythos EP in
the practice space for fun and released it as a CD-R on the ugEXPLODE
website. This track is a version of the song from the solo Systems Emerge From Complete Disorder album with actual humans playing together.

This
was the first public appearance of the Flying Luttenbachers. The group
started officially in late 1991, and we got this radio show gig in
Feb. 1992. At the beginning we were an acoustic free jazz trio
featuring two horn players and myself on drums. The music was very wild
and humorous. We played a bunch of Albert Ayler covers as well as some
simplistic original material. This stuff is definitely very raw on
every level, but there's a carefree sense of fun which makes it
enjoyable to listen to (in light of the preposterous levels of bleak
obtuseness the band continually rose to afterwards). This music was
first released on cassette in 1992, before being reissued on CD in
1996. The master was taped on a boombox directly from the original FM
broadcast! Those were different times. I was 19 years old and totally
full of shit.

A powerful Black Metal-tinged track from our 2004 album/suite The Void.
The main riff was originally conceived for a fucked-up glam-rock unit I
played in during the mid-90s (the group was Vanilla, with myself under
the nom de plume “Johnny Holocaust”) and it was inspired by certain
inappropriately creepy guitar breaks in Olivia Newton-John and Linda
Ronstadt songs from the '70s. The entire album The Void was
based on a very small amount of motivic material, reiterated and
transformed throughout the whole thing. Most people didn't even notice.
Too bad for them. At the time I was very influenced by Bartok,
Stravinsky and Messiaen, and how they manipulated their ideas with very
deliberate intelligence and resourcefulness. Sure, you can just write a
shitload of material, but can you take just a few chords and make it
into a whole album? Well, we did and it worked rather well.

The
opening ripper from the third Luttenbachers full-length released in
1995. The opening and closing theme is an allusion to “Shout at The
Devil” by Mötley Cr