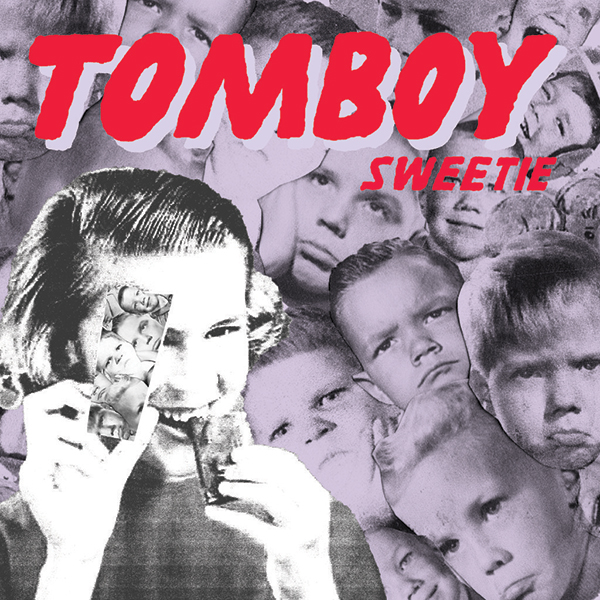 “Being a tomboy is about not letting other people define who we are,” says Madeline Burrows, the drummer, vocalist, and songwriter of the feminist punk group Tomboy. “Women are constantly told that we’re too fat, too skinny, too loud, not loud enough, too abrasive, not confident enough, too feminine, not feminine enough, too emotional, too cold, we’re not smart enough to possibly understand but when we speak our minds we’re know-it-alls. We’re constantly asked to fit into increasingly narrow boxes. And we’re lucky to be a part of something, whether it’s a music scene or something else, rather than being seen as a central and transformative part of creating something new.”

It’s those sorts of oppressive expectations, social norms, and stereotypes that inform and energize “Tomboy Anthem”, the first single from the band’s smart and careful full length, Sweetie, out on April 28 via Ride The Snake. That’s the album art above, designed by Taylor Mulitz of Priests. The song is “all about saying ‘fuck you’ to that,” says Burrows. “It’s about shedding a reliance on other people’s standards and expectations, rejecting other peoples’ definition of who we are, and being honest about it. No apologies.”

Sweetie has been in the works since the summer of 2013, over a series of sessions at Dead Air Studios in Western Massachusetts. Guitarists Hanna Negami and Ali Donohue, bassist Meghan Hynes, and Burrows all originally met in Boston, but their involvement in other music and activism projects has led them to different cities since. (They separately play in other bands like Fleabite, Hissy Fit, Animal Mother, Bad Idea and a Ramones cover band, and their activism efforts range from helping organize Smash it Dead Fest and Girls Rock Camp Boston, to Burrows’ accomplished one-woman play on youth in the pro-life movement MOM BABY GOD.)

As a result, the recording process has been slow, but layered. “We’ve all grown so much in the past two years, both as musicians and people, and I think that’s reflected in the album,” Burrows adds.

Stream “Tomboy Anthem” below. Sweetie is out April 28 via Ride the Snake.