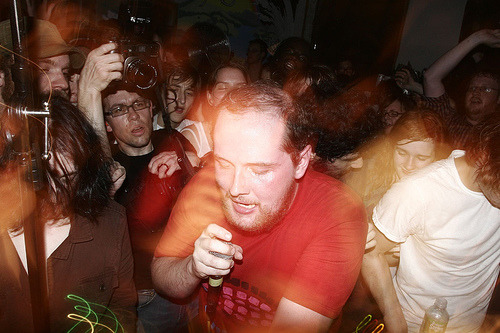 Um, looks like the photos ripped of Dan Deacon for a Greyhound ad in XLR8R were from our fuckin CMJ show. Moving on:

Greyhound is getting in on that subversive advertising, but look out Lifestyle Marketers, you've pissed off a prospective poster boy.

From his MySpace page:

“in the december issue of XLR8R magazine there is an ad for greyhound bus service that uses a photo of me at a show did at silent barn, a diy venue in brooklyn. no one asked me if this was ok. no one asked silent barn if it was ok to associate them with the company.

i first heard about it from jason of wzt hearts, who are also used in the ad, also without permission or even the courtesy of letting us know.

greyhound bus company is one of the worst run, bullshit companies i have ever had the misfortune to use. they are a total monopoly and take advantage of that with poor service and price hikes and route cancellation. they have bought all the other smaller companies and run them out of their office in dallas. they treat both their employees and customers like shit. they are a cancer.

since i do not drive i used to use them to get to shows (when nothing else was available). on many occasions i had to cancel shows because the bus would be late, my luggage would get lost/stolen, the over sell their buses, and fuck i fucking hate them.

it really upsets me that i am being used to promote them. if i had my way i would see all their buses transport guns to all the people they have fucked over.

OTHER BUS COMPANIES YOU CAN USE TO AVOID GREYHOUND:

–ivymedia.com is a list of bus companies on the east and west coast.
–megabus is a service for midwes cities that route out of chicago. sometimes the rides are as low as $1

again, greyhound has fucked with me for the last time. in case this message finds its way to someone in the advertising department of greyhound: eat my shorts you dickless pig fuckers.

PrevPreviousMp3: John Lennon interview 12 hours prior to death
NextBarack Obama is for the childrenNext