Dustin' off Gang of Four, Wire and The Warlocks 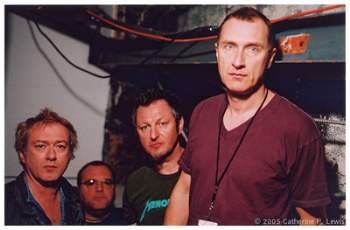 My Inbox experienced a recent surplus of reunion.mp3s from bands that debuted at least a decade ago, if not several and are more likely to get a Best New Re-Issue stamp than a Best New Music stamp.

Let's begin with the youngest of the retirement home refugees, The Warlocks. I didn't hear the 2001 debut Rise & Fall until late last year, but I was having a terrible fit with The Brian Jonestown Massacre. After exhausting myself on the entirety of its discography, I broke out in hives, purely manic as to what I would do next. Where would my sweet release of neo-psychedelia come from next? I related my fiendish needs to my sponsor, who calmly directed me towards Rise & Fall, which was like switching from oxycotin to vicoden, but alleviated me of the cold sweats and hives no less.

Well, turns out this record and The Warlocks self-titled debut have meant enough to others that both are getting the remastered treatment with unreleased rarities to boot. With both records long out of print and eight unreleased songs collecting dust for no good reason, The Warlocks wrote a 16-page booklet of liner notes, photos and manipulated collages and crammed it all into a CD jewel case (gross). The Warlocks' ring-leader Bobby Hecksher had this to say:

“When
we started The Warlocks, it was an exciting time. We were just a bunch
of young adults into everything psychedelic. We listen to
everything, took everything, we saw everything, we recorded as much as
possible and tried to fry our brains on rock and roll. It was
an ever-revolving cast of beautiful, volatile fuck-ups and extremely
gifted players. There were a lot of magical recording sessions and I feel
blessed to have gotten it on tape. It's an interesting
glimpse into the mysterious neo-psychedelic, third wave explosion
that was happening LA.”

Actually it turns out these records meant a lot to The Warlocks, as the re-issue package was released on the band's imprint Zap Banana Records. Get the re-issue CD here – hope you've got euros.

The Warlocks, “Turn The Sun Down” (unreleased)

The Warlocks, “Song For Nico” (remastered)

Heading further back into time, it seems the originators of post-punk woke from hibernation to find a million little kiddie bands ripping up their innovations. Whatever the reason, Wire and Gang Of Four are reformed, reinvigorated and rewriting songs. Gang Of Four hinted to the possibility of a new record back in '06 when they toured and played All Tomorrow's Parties, while Wire never actually knew when to quit, releasing three albums per decade for three straight decades.

Wire's “Two Minutes” is precisely what one should always expect from the London blokes, bare sledgehammer riffage, reverberating static riffage. Red Barked Tree is Wire stripped to the core as the songs were recorded strictly by Colin Newman, Graham Lewis and Robert Grey. The album claims to redirect emphasis to Wire's lyricism, which I totally get when I hear Colin Newman mimic vomit sounds.

Red Barked Tree is out January 11 on Pink Flag (hey, that's the name of my favorite Wire album, what a coincidence).

Gang Of Four gave us a new form of Entertainment!, gave us Solid Gold and then got Shrinkwrapped years later and yes, this sentence functions as references to their albums, as well as the dissipation resulting in carbon copy saturation. Apparently, Gang Of Four are not the least bit upset that for awhile, everybody wanted to sound like them, minus the accent. Remember when we jammed out hard to Bloc Party's Silent Alarm, totally stoked on the new shit, then a bunch of smarmy curmudgeons saved our tainted souls by calling us pubescent shitheads for not knowing it was blatant plagiarism and convinced us to abandon them for Gang Of Four? Never looked back, right?

The band's newest record is here to tell us they are Content, which is unsettling considering I've been told they are “one of the most radical and important groups of the last thirty years.” If that's true, somebody needs to flesh out that Gang Of Four Wikipedia page with some radical stories; sounds like they just made good music, then stopped 15 years ago.

Gang of Four's Content is out January 25 on Yep Roc Records (oh rad, a label not run by the band that's resurrecting careers).

Gang of Four, “Never Pay For The Farm”