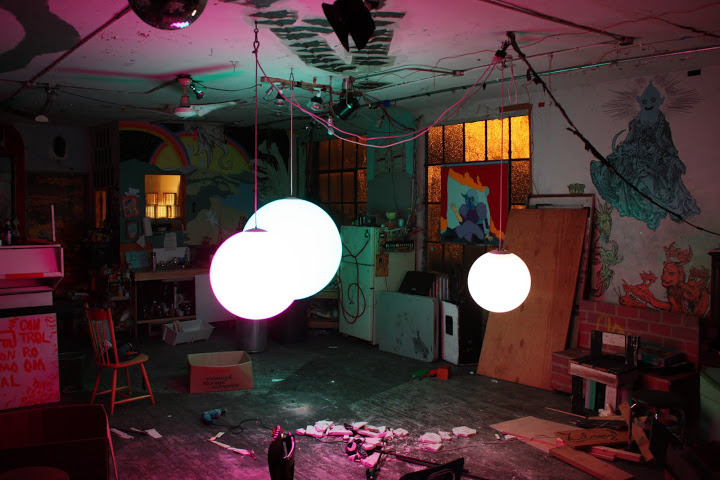 In a post on his site, Todd P announced that he'll be making a new all-ages venue in the space that used to be Silent Barn, 915 Wyckoff Avenue. According to him, when Silent Barn was raided in 2011, he was one of the last signatories on a since-expired lease, finding himself in somewhat of a “Kafka-esque position” about what to do with the old space while avoiding a lawsuit. The new venue, which doesn't have a name, will open on a TBD date, and will carry the same hallmarks of Todd P's other ventures. You can read about all he has planned and what instigated this plan in his full post below, which is followed by a statement from the people behind the new Silent Barn.

A NEW VENUE IN THE FORMER SILENT BARN SPACE – an all ages venue + art studio space on the Bushwick/Ridgewood border
The former Silent Barn space on Wyckoff Ave will re-open as an all ages music venue for “new music” (aka noise, avant composition, artistic rock, etc) – with a (licensed) bar for the grown-ups, as well as on-site creative office space and artists’ studio space. It will double as a neighborhood bar on nights without shows, and a gallery, plus a separate gallery and show space in the basement to open at a later date.

There seems to be some confusion as to why this is happening, and how, so here is the tale: apologies it’s a long story…

In July 2011, the original location of the Silent Barn was forcibly shutdown in a joint raid by the NYPD, the FDNY, the Department of Buildings, and the Department of Health; and its residents were thrown out in the street. I was not involved in the Silent Barn at the time (I had been a member starting in 2007 but I had gradually dropped out and then formally quit and stopped paying rent, in a cordial understanding with the “Barn Dudes” about a year before, when I found out I was going to be a dad). I was soon surprised to learn that the guys who ran the place had never got around to signing their own lease (out of bumbling benevolent flakiness, presumably), and that my name was on the last (expired) lease on the building. I’m told that I would have had to have evicted the guys and thrown them out in order to have indisputably cleared my name off the lease beyond question, since they hadn’t signed their own.

This has become an issue because (for reasons unknown), the Silent Barn guys have neglected for two years now to step forward and assert on paper that I wasn’t involved when they were raided. The situation has left me and my family potentially exposed to some serious financial liability, and put me in a complicated place with that building’s landlord – from whom I happen to rent another building. I have found myself in a Kafka-esque position, forced to defend myself from a lawsuit about a building that wasn’t mine, for missteps that weren’t my own, from a building landlord who himself was cited and severely fined for major Fire Department and Building violations simply for unwittingly owning a building where tenants ran an “illegal nightclub” and lived in “illegal” residential apartments under his nose; plus more liability for lost rent because the guys stopped paying for months then allegedly broke lease without notice. As you can imagine, it has been a messy situation.

Adding perceived insult to injury, the owner initially defended the dudes and spent money financing the beginnings of a legal defense for the Silent Barn guys and their former space, and had retained an architect to help them re-open it – just before they bailed. In October of 2011, the Silent Barn guys left suddenly upon learning from that architect that, though the building could be legalized to host shows again, it could never be a loft they could live in again. A few months later the landlord approached me with a simple deal: since he’d already paid for it, what if he continued to finance “legalizing” the space and could get the building’s problems resolved; would I agree to come back then as a tenant at the same rent we paid in 2007, with nobody living there but otherwise no other strings attached?

It was a very good offer and it was being offered by a man who had a real grievance against guys I had introduced him to, and whom I rent from in another building – it was an offer I couldn’t comfortably refuse. It was also a clear way to make another good all ages venue exist in the scene. It’s now two years later, the Silent Barn guys are thriving in their own new space, and I have a new lease on that old familiar space off the L train, with legal certificate-of-occupancy and other paperwork baked into the deal. We haven’t settled on a name yet but I can tell you that it won’t be called “the Silent Barn”! haha

The new Silent Barn, which has its space at 603 Bushwick Ave and reopened this year, had this to say about Todd P's involvement in the old space:

“As we’re sure everyone is aware, Todd P played a huge role in Silent Barn. Some of the most memorable events there were organized by him, and it makes a lot of sense to us for him to be running this new project at 915 Wyckoff. The more venues for experimental and innovative music in New York, the better!

Todd is alluding to an ongoing dispute between some members of the Silent Barn and the landlord for 915 Wyckoff that we won't discuss.

We wish him the best of luck with his new venue.”