Live from the Oakland police clusterfuck 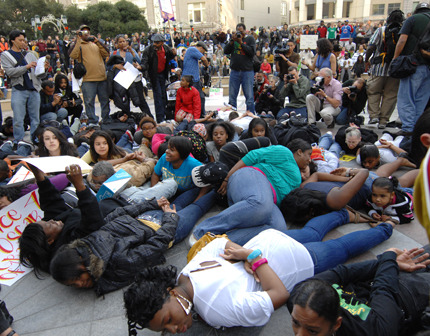 Have some heart for Oakland. Oscar Grant III was murdered by ex-BART officer Johannes Mehserle in cold blood, with footage. Mehserle recently received sentencing that will amount to a few months of prison time. The East Bay stronghold is in dire need of stability.

Despite Oakland’s recent firing of 80 cops, there was a show of badges from San Mateo, Sunnyvale and as far south as Monterey at a recent rally that turned into a protest after word of the verdict leaked. Given the amount of money that the Peace Officers Research Association of California (PORAC) has funded for Mehserle’s defense, the dazzling display of Bay Area law enforcement was like a 500+ sordid salute not unlike the banner raised from the yacht in McCovey Cove that read “Free Johannes Mehserle”, flown by the defendant’s proud father. Seemed like PORAC feared that if Mehserle was sentenced with gun enhancement, it could hold officers legally accountable for their actions, a ramification that could jeopardize future cases in which officer’s are compelled to use lethal force (not to mention the few cases of officers brought to trial for any gun enhanced peace keeping actions).

The post-rally march from Oakland’s City Hall was destined for the Fruitvale BART Station where Oscar was murdered, but it was deterred by police who blocked off International Boulevard. The crowd entered an East Oakland suburbs where they came to a tense standoff between police at a skirmish line at 6th Avenue and East 17th Street. Some protestors reenacted Oscar Grant’s murder by lying face down on the ground, hands behind back, in attempts to taunt the line of riot police. Hanzu Elkindiy, a senior anthropology student at San Francisco State University weighed in on the excessive number of patrol personnel. “How did they think people would react? You have a whole community of people that are already upset with the police and then you egg them on with more police with riot gear. It was like these officers from all over the Bay they really wanted something to go down.”

At this juncture, the heavily armored police quickly outnumbered the chants of “Justice for Oscar Grant.” Police Chief Anthony Batts attempted to save face and maintain control over the protesters, declaring their gathering “unlawful” and a crime scene, based upon a situation involving an officer who had his gun and holster stolen by one hell of a pick pocket.

The media swat team (including aerials complimentary of KRON 4) competed for coverage against the spot light-wielding ghetto bird. Even with the ensuing publicity build up to the sentencing and unruly behavior projected by all, the damage was limited to one business and some dozen cars with smashed windows. Yet some 152 people were arrested.

Ever since the New Years Eve 2009 murder of Oscar Grant, the hometown response has been unwavering and steadfast in communal support. Oakland rapper Ise Lyfe put out the militant call to arms “Hard in the Paint” long before Waka Flocka did. Mistah F.A.B. provided a more sentimental reflection on Oscar’s murder with his eulogizing on “In My Life.” After the sentencing F.A.B. also provided more words of encouragement for the Oakland community and a plea for folks to respect the property of others and even recognize that not all men in uniform are ruthless like Mehserle.

The good news for Oakland is that resident Jerry Brown has been re-elected as the Governor of California and intends to stay true to his roots. (His election night venue was Oakland’s Fox Theater.) The downside is that the race for Oakland’s new mayor is still in limbo thanks to a “ranked” system where a first, second and third choice for candidate is cast on the ballot. Last I checked on the status, Oakland Councilwoman Jean Quan was leading over former Senator Don Perata. But as East Bay Chronicle staff writer Chip Johnson has said, pretty much anyone would be an improvement over the current “lack of visible – presence in the Oakland’s mayor’s office” in reference to lame duck Mayor Ron Dellums.

The new Mayor in waiting has a daunting task: balancing civic matters and putting the needs of the community at the forefront of concerns. Dellums was too busy scrambling to save face over a $239K property tax scandal while an angry Oakland resident made a website entitled www.rondellumssucks.com. Let us all hope that the new incumbent works to heal the city of her wounds, reign in problematic authoritative personnel, support our Golden State Warriors and show some love to the citizens at the same time.

PrevPreviousKanye and G.W. start compassion fraternity
NextWe are all NazisNext