In Defense of Joey Crawford 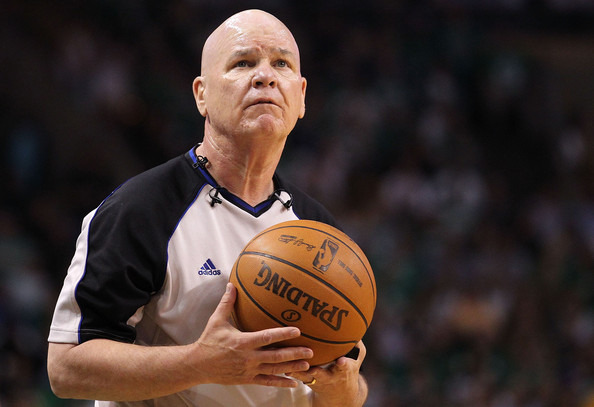 Joey Crawford is a toad. A demonstrative, turtle-necked toad. He yells at young boys to mop with more enthusiasm, he yells at scorekeepers to keep better scores, and he yells at the Big Fundamental for laughing. Joey Crawford is one of the few NBA officials the general public can identify by name and sight. That is not the mark of a good official. Each time Crawford suits up—an admittedly weird thing to think about since the focus should be on the players, not the officials—fans hold their breaths waiting Crawford to pull some stunt. “Oh good lord,” says the casual and diehard fan alike. “How's Joey going to screw us tonight?” And there's nothing like a high-pressure Game 5 to showcase how infuriatingly correct Joey Crawford can be.

Last night, Crawford was tasked with officiating the highly competitive Thunder/Grizzlies game. It was the fourth time in as many outings that the two teams went to overtime. With the Grizzlies holding a two-point advantage and the clock nearing triple zeros, Kevin Durant went to the line for the potential game-tying free throws. He sank one. He is Kevin Durant. He entered his routine for the second shot. And then, like a friend who keeps coming up with a more convoluted routine to disrupt the inevitable in a game of HORSE, Joey Crawford whistled and sprinted at Durant, yanking the ball from him, and took off to the scorer's table. Durant then proceeded to miss the free throw, and Memphis held on to take an important 3-2 advantage in the series.

We repeat: Crawford is a toad. But, he also has an incredible ability to ensure everything is done by the books (mostly). The scoreboard, the one players often use when improvising strategy in game, was showing the number of fouls incorrectly. If not addressed, it could be used to deflect blame for whoever lost. Joey saw this, and corrected it. The question is, despite the fact that he is a toad and he doesn't need to dance and be so god damn showy with his actions—and does he really need to bark at everyone and why's he so mean all the time, and I don't pay good money to watch some five feet nothing inverse Buddha stretch his authority as far as he can—when would be the appropriate time for him to fix the error?

With only 20-some seconds left on the clock each second becomes that much more valuable. The only guaranteed dead ball is between Durant's free throws. If he sinks the second one, there is no guarantee that Memphis or the Thunder will call a timeout. Who's to know whether Memphis won't just run the floor? Crawford stops the game, and you have the Grizzlies complaining that it gave the Thunder a chance to set up their defense. If he doesn’t stop the game, there’s the small but entirely possible chance that a player doesn’t know the foul count and it has a negative influence (akin to Chris Webber’s infamous time out).

It was a tough call for Joey Crawford, but he’s nothing if not decisive. He probably did make the right decision, but now we're talking about Joey Crawford and not basketball, so we all lose. God damn.