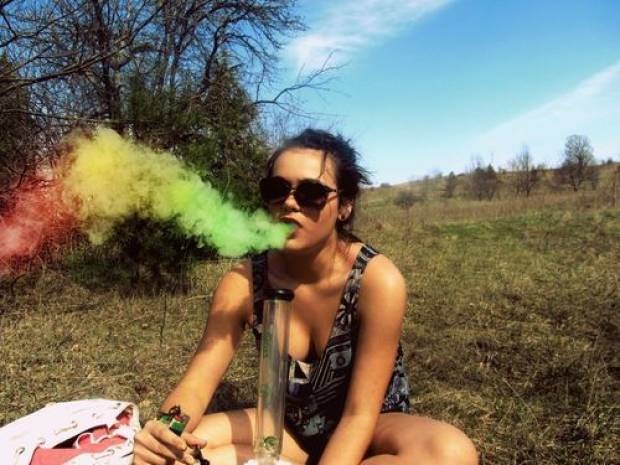 Big things happening: Ty Segall anouncing the upcoming Slaughterhouse, his first album to be recorded by the Ty Segall Band (Ty+ Mikal Cronin, Charlie Moothart and Emily Rose Epstein) slated for release June 26 on In the Red; Cut Chemist providing opening tunes for a screening of One Day on Earth at the UN General Assembly April 22; Record Store Day is tomorrow (April 21) and here is a helping of pop cultural delights in no particular order.

Starting things off we have a new single from Phèdre with the new single “Aphrodite.” An illuminous electro lament of Aphrodite's flight into the sun, the single heralds their first US show June 9 headling at the Mercury Lounge in NYC with support from Rioux. Phèdre's self-titled is out now from Daps Records.

Wymond Miles released his EP Earth Has Doors a month back and has unveiled grand plans for the release of his solo LP Pale Moon. Recorded quickly last winter, the songs that make up Pale stem from the catharsis of dealing with the loss of loved ones in a song cycle that makes the album a much more personal departure from Miles' work with the Fresh & Onlys while retaining an equal pop sensibility. On the title track, the intimacies and complexities of love and loss are explored while the glow from the moon above provides a hint of the sunlight whose reflective beams pierce the thick veil of those nights that never want to end. Wymond's Pale Moon emerges June 12 from Sacred Bones.

Bam Spacey is keeping the Kevin Spacey surname cult of electro (Cassettes Won't Listen's 2011 legally altered Evin Spacey) This week we have been catching some rays with the Malmö, Sweden producer's b-side “Ström” with the following Saturday remix from his debut single Vi delar samma grav (translated as 'we share the same grave'). Spacey, real name Magnus Johansson, has been keeping the beat grooves deep since 2007 and has a passion for designating his remixes for each of the two days of the weekend. Bam Spacey will be following this release with his debut EP May 22 from Ceremony Records. Stand by for more details, and listen to “Ström” now.

Checking with A.Dd+ we get a listen to “When Paris Smokes ft. Tunk and Mz. Fortune.” Look for the follow up to the Dallas duo's When Pigs Fly album with DiveHiFlyLo coming later this year. Paris Pershun explains the following loosie here; “Slim and Tunk's verses are everyday tales of smoking and folks trying to freeload. Since I don't smoke, but provide the Caddy for them to smoke in, I had to tell my side of who the freeloaders are in that situation.”

Zorch's Shmu dropped the single “House of Stares” with an accompanying video advocating singing in front of mirrors, carousel rides and pajama dancing. The multi talented musician born Sam Chown has recorded all instruments while providing his own production for his album Discipline/Communication, available June 5 on CD and digital through Grand Theft Zamboni Records. On “House of Stares,” catch how Chown spins a lounge groove by utilizing a xylophone like a jazzmaster, working the vibraphones like an alt Austin themed supper club in Vegas.

In our latest edition of keeping up with L.E.P. Bogus Boys we catch a glimpse of their video for their title track “Now or Neva” from their DJ Green Lantern-hosted mixtape that dropped last year. Here is the L.E.P. statement; “Now Or Neva is the title of the mixtape and either you're going to go hard and put it all out on the line now, or forever be content with where you are in life.” Once you've made it, though, it's important to take the necessary steps to protect your good fortune and the video also touches on that aspect. You can go from having everything, and lose it all if you don't manager your wealth properly, we see millionaire ball players broke because of mismanagement.”

While Denmark's Alcoholic Faith Mission has blown up, we miscontrued the band 's title for a big tent AA faith healing revival administered by one of those manic street corner preachers who performs pentecostal excorcisms strictly in Spanish. that deceiving super acoustic almost acapella opening with the accordion before the next 3 movements reveal something savvy outside of the typical pop construct to create something quite addictive in either minor or mass consumption.

Django Django revealed the second single from their super fun analog video for “Storm.” Django Django's single Storm comes out May 7 while the debut album is out now and available via iTunes.

Listen to the Zongamin remix Sandro Perri's “Changes” with a club foot drum loop and a terrific twist. What you get is the sort of pitch bend you hear guest DJs spin in the club but now you can enjoy that experience at home or anywhere.

Arc In Round's forthcoming self-titled album is out June 5 on La Société Expéditionnaire, home to SOARS, Daniel Knox, Judson Claiborne, etc. Meanwhile feast your ears on “Hallowed”, showcasing the talents of producer/engineer Jeff Zeigler, Mikele Edwards, bassist Josh Meakim and drummer Matt Ricchini providing a taste of the full length that is rumored to at Zeigler's Philadelphia studio (Uniform Recording) and feature guests from homies Kurt Vile and the Violators along with Pattern is Movement. Listen to “Hallowed” here.

Add Kool A.D. to the latest list of luminaries to collaborate with Main Attrakionz since Squadda B blazed it out with Blissed Out. On “Ticky Ticky” Victor kicks it with North Oakland's Attrakionz while Young L keeps the beat spinning. Look for further appearances from Trackademicks, Boots Riley from the Coup, New Yorkers Mayhem Lauren and Heems (Himanshu Suri) on Kool's upcoming free album 51 dropping April 24 on Mishka/Greedhead/Veehead.

Brooklyn's Ex Cops shared a listen to their single “You Are a Lion I am a Lamb (Original Dram Session)” coming April 24 as Other Music Recording Co’s first release marked OM-001. Other Music was launched in partnersip with Fat Possum as an imprint in search of international talents as well as album reissues, or so we are told. Meanwhile Ex Cops Brian Harding and Amalie Bruun are busy wrapping up their first full length due this August, but you can get an introduction to their mellow seductive pop world now.

In brilliant or sometimes acid washed black and white is gritty analog video from Ty Segall and White Fence's performance of “I am Not a Game” in Room 205. Call them the garage dream team, we just like to think of this as an excellent loud reminder that their collaborative album Hair drops this upcoming Tuesday, April 24 on Drag City.

THEESatisfaction's video for “QueenS” features the finest 'dos in the music video biz and a friendly not to funk with their groove. Following up 2008's That's Weird ,Stasia Irons and Catherine Harris-White recently released awE NaturalE last month on Sub Pop. Catch them this month on applicable UK/US tour dates.

Capital STEEZ dropped the video for “Vibe Ratings” from his forthcoming release AMERIKKKAN KORRUPTION. A continuation NYC's Pro.Era movement, we last heard from STEEZ making a scene stealing verse appearance on the Joey BadA$$ track “Survival Tactics” that reaffirms our suspicions that these guys are the next big thing for East Coast hip-hop. For the track “Vibe Ratings” Capital borrows Atmosphere's harp sample from the track “Sound is Vibration” while breaking down sound system and government corruption with a vibrating delivery older than the hook's debut from Overcast back in 1997.

Chicago trio volcano! discovers an unusual “Piñata” in the video for their title track. Instead of discovering candy, they find innards and enough odds and ends to complete an unexpected picnic. Their much anticipated album Piñata is coming June 12 from The Leaf Label.

Gifted lyricist Casual is following up He Think He Raw with the latest progression He Still Think He Raw with production handled by DJ Fresh & The Whole Shabang dropping May 22 on Hiero Imperium. In the video for “Tears” directed by Aris Jerome, Casual describes a variety of scenes from the varieties of hustles by folks to make that paper to subsist by all means necessary. From trading rhymes, skins, temp jobs, pimping and slanging the complexity of survival is told with heart and humanity for those in the struggle.

Jimmy Moonboots invites you to find a sun of your own in the homemade video for “Lost Encoded Memories.” A song and video that guides you out to the nearest shoreline where you too will find long lost beats, motivations amid dense sequenced synth tone selections. Your sense of total recall will be triggered like Arnold's with twirling keyboard patterns and morphous organic bass lines taking you to those water sculpted rocks, glassy sands and unforgiving coral.

By now you are well aware that Grass Widow has a new album called Internal Logic May 29 HLR Records and today you can catch an album promo by Aubree Bernier-Clarke that depicts the trio with lab coats testing, the new LP with your safety, comfort and enjoyment in mind.

Keeping the visuals coming, we give you the summer time Instagram vibes in the video for Fanzine's “L.A.” The London lads' power indie ballad set “down in L.A., two miles out from the bay” is brought to life with director Jacob Perlmutte's romantization tof the city as we follow a gorgeous blonde's flight from the Hollywood hills to shed her material clothes and dive into an alluring sea. Look for the the single April 30 on Best Fit Recordings. (NSFW?)

Get a listen to Neneh Cherry & the Thing covering Suicide's “Dream Baby Dream.” Their debut features jazzed up covers of songs by Don Cherry, MF Doom, Martina Topley-Bird,The Stooges, Ornette Coleman and more with original jams from both Neneh and The Thing's Mats Gustafsson. Their album The Cherry Thing drops June 18 on Smalltown Supersound.