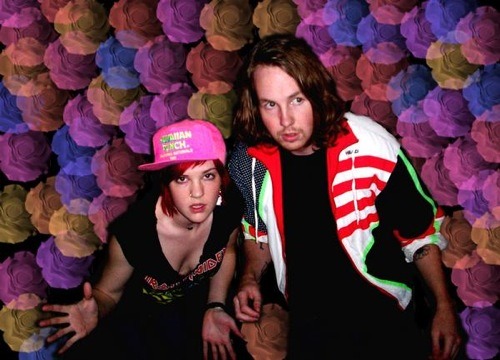 Less than a year old, 20,000 built a local and critical following through its live set. The young couple takes to the stage with their keyboards and iPod on drums several times a month with a momentum that should put their recently released record into every midtown Sacramento party playlist. I visited the young couple to have a few beers, admire their seductive Prince poster and discuss the maddening process of making that first record.

With eight songs clocking in at 19 minutes, 20,000's first album is a deliberate and punchy dance music roster with party-rocking intentions. After giving away copies of a demo album to their friends, who responded positively, the two decided to dedicate their time and money to creating professional recordings. Recording started in April with taping drum samples, at a time when Meg had yet to learn keyboard. “I still play with a piece of tape above the keys,” she said, which labels them numerically. “I play 5, 12, 5, 12, the whole set by numbers. I don’t really look at them anymore, but it’s more comfortable for me to have it there.”

20,000 is Meg’s first band, but David was in a local new wave band called Didley Squat. Still, he also claims to know next to nothing about playing instruments. Going into recording, the pair created a system of notation that led to countless hours clocked and sheets of numbers documented.

Executive Producer Evan Bailey will probably continue to be just a guy in Sacramento, but to 20,000 he’s a valued friend and the magic behind the labors of recording. Apparently, Bailey bought recording equipment, mixed the record and fronted the money to master it with military money.

David and Meg knew “Trauma Team” would be the first song. When David sat down at a small desk in Meg’s bedroom to write songs, he took notice to a seemingly esoteric sign on the wall. “At the time it seemed obscure to me,” David said. “But it is probably just a sign that was meant for an EMT vehicle.” Other lyrics are not quite as impenetrable. “We were both reading this great book on the Talking Heads when David wrote this,” Meg said.

Inspired by a psychedelic Freaks and Geeks episode, “Cat Person” is about the mind on drugs or more specifically, the paranoid mind of Lindsey Weir on drugs. “We’ve seen the entire season on every drug,” David said. “Excluding hard drugs such as oxycotin, heroin and cocaine,” Meg added.

“I draw inspiration very literally,” David said. “If I see a movie, I tend to form a different story in my mind and that can become a song.”

The first song David wrote that ended up on the album, he says it’s mostly about having fun. “I think I wrote ['Children'] and recorded a demo version about a year and a half ago,” David said. “I wanted to write a song about going out and staying out late. There's always two sides to having fun, you usually make the conscious decision to fuck over your future self. I wanted the song to be more depressing then it turned out, its actually a really fun song. That's what usually happens.”

Says Meg: “The lyrics are a combination of the sort of abstract Native American imagery with the more personal, real life ideas of 'things are hard sometimes but I'm OK' and 'I am going to crush you',” Meg said. “I'm really not sure what David was going for when he was writing it, but that's what I take out of the song. When we play it, I always picture myself as a plains Indian totally fucking up my enemies.”

“This song and the last song ‘California’ are the ones that turned out different than the demos,” David said. “After translating the drums and re-recording everything, it changed the song.” Were the original versions less creepy than the version on the album? “That song is based on Blue Velvet,” Meg said. “It’s not from personal experience. We decided to put some girl vocals on it to make it less creepy.”

“The Window is a good example of a song taking on a whole new vibe once Meg started singing on it, David said. “When Meg started doing the verses and the choruses, I feel like it added new characters to the narrative. The song has more of a story to it than anything else I have written, and I think it makes sense to have male and female voices in it to take on different roles. The song is basically about watching and being watched, and it didn't come across as well when it was just me singing and being creepy.”

For the refrain of “Kill the Killed” 20,000 hired its friends to record party vocals or as David puts it, “forced our friends to sing along with our songs.” “It was in this practice space with terrible acoustics,” Meg said. “It was just a bunch of our friends, really drunk. That is probably the best part about listening to this album for me. We can hear our friends and think about all the fun we had that night.”

“I can't emphasize how important [the party vocals] were to the whole thing. I've really considered this to be a CD for our friends,” David said.

Putting his friends on the record has already inspired a possibility for a new recording technique on the next 20,000 record. “I want to do the next album with all party vocals on every song,” David said. “I would like to have a huge house party and attach microphones to everyone or have little microphones stationed around the house, record the whole party and have that running through the album.”

The question “What is a raspberry falcon?” spawned a genuinely mushy moment between David and Meg. “Basically a raspberry beret with different words,” Meg stated. “It’s a Prince reference,” David said. “Meg had reddish hair at one point and that’s what it reminds me of.” Apparently Meg had no idea David wrote the song with her in mind as well.

One of the last songs written for the album, it provides tender resolution to the record with a mantra-like chorus. Peculiar enough, the duo almost didn’t put it last and respond to the song’s message in opposite ways. “We knew ‘Trauma Team’ was going to be first, for some reason that felt right,” David said. “But ‘California was originally in the middle, but after it got bumped to the end it became my favorite.”

For David, “California” is a eulogy: I was born and raised in Sacramento. I definitely want to not be here and that’s kind of what the song is about. I could die here in California and that would be depressing. I want to get out of the city and the state and be somewhere else. The summers here are beautiful compared to other places, but I don’t know that. I’ve just heard that.

For Meg “California” is a tribute: “At the beginning we hear our friends and it’s a good Sacramento song. I’ve lived very briefly in Texas, Ohio, Washington D.C. and San Francisco. Sacramento feels like home to me. I’ve always thought of this song in a positive way. This is a place you can just get stuck, but you have to get out of here sometimes because it’s a really fucking small town.”

Purchase the 20,000 record through the band's Myspace page.