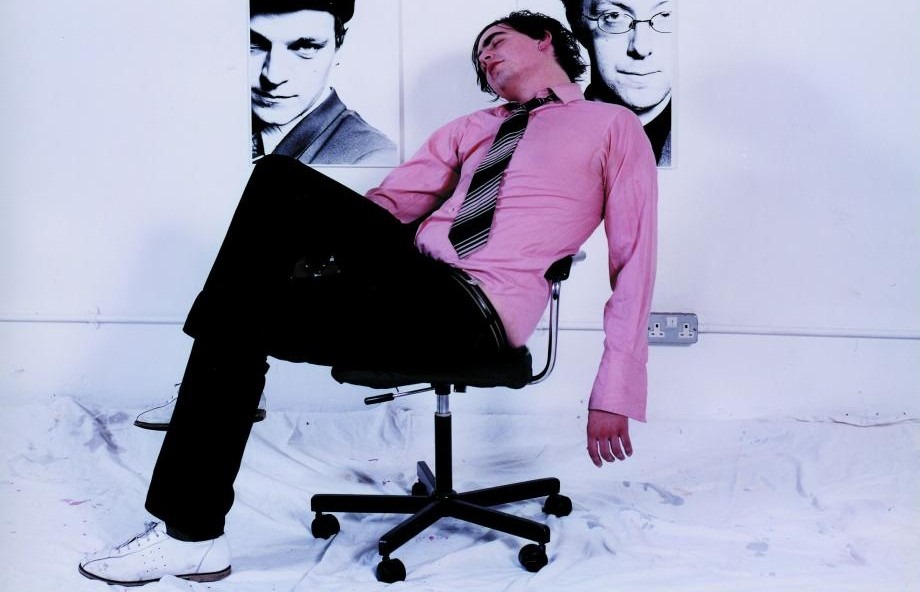 Art Brut's album It's A Bit Complicated (Downtown) came out in America in June. Eddie Argos dropped into New York with his cheeky swagger in tow, speaking five thousands words a minute and laughing the whole way about the great London album his band will write when they hit 21, his cat, and how every band alive today is fantastic. Since everyone in the band is at least in their late 20s and last year, Argos got in an awkward fist/kick fight with Kele Okereke of Bloc Party (post-shitting on that band's penchant for whining), I didn't believe a word of it. You should, though.

Eddie Argos: It's Eddie, can you hear me?

Yup. So you've been doing interviews all day?

This is the second. Well, the third.

That's not too bad.

We're designing posters for a magazine. I read a book. We've been doing fun things. It's like being at school.

You've been going to any of those karaoke parties that have been thrown, or is that just happening on the side?

You haven't seen any of it?

I haven't had a chance yet. I'd love to do some.

You had a show last night…

I heard Freddy wasn't playing or something?

Freddy was there. Everyone was playing, I think.

I guess my friend was drunk.

Yeah, your girlfriend was just drunk.

You're last album, you were sort of writing about your 19-year old self…

Both albums are about me really. We've matured every so slowly. Today I'm about 20.

In the last few months have you hit any milestones?

Yeah. I've matured ever so slowly.

What'll happen when you hit 21? What's that album gonna sound like?

I don't know, it'll be all about London.

Yeah, it'll be our Park Life.

I'll get cracking on that now. I'll get that done. By Christmas.

What about new music? Who's making really shitty music?

Uhh… I was trying not to do- I was mean about so many bands last year, I'm only being nice about bands this year. I can't think of any shitty bands there are at the moment.

None, whatsoever. It's a pristine landscape out there…

Yeah, it's pristine. Yeah, every band at the moment is brilliant. Without exception. Well, maybe- um. What glorious times we live in!

When you guys were making the album, how did it work? You guys were all in the studio together, versus splitting the time with day jobs last time?

I'd hear bits and pieces and go home and write something and then come and try and add it to the songs and stuff.

Do you have say in what they're doing? Can you be like “that's shit” when you here it?

They don't write any shit songs. Sorry, man. I wouldn't want to say “that was shit”

But how often do you comment on the music itself? Or is it a split down the middle…

I kind of don't. Often, when I add words, I'm like, “Maybe that should be a bit shorter,” but other than that, I don't comment on the music. If they started telling me how to write the lyrics, they'd piss me off, so I don't really want to piss them off by telling them how to do their jobs.

Behind their back I'm saying they're terrible.

Behind their back I'm saying they're shit all the time. I'm not really doing that, I was joking about that.

They're probably doing the same thing.

They probably are. [clears throat]

I've heard you're already writing new songs? Any similarities or changes going on in the new songs?

Post the album? We're just writing new songs now, so I don't know what's going on with them.

It's just come out in the States, but it feels like these songs have been around for so long… that EP half-album floated out such a long time ago.

When it got on the internet and stuff, we were still writing it…

That was an accident?

Yeah, it just ended being downloaded by everyone, which is nice. But we were still writing other songs at the time. We've been on tour for quite a long time… We wont have until August to write some more songs.

What's the rest of the summer?

Busy. Lots of festivals and all that business. It's kind of nice in the summer, cuz like you don't do too much in the week. It's like having a job or something: you can go home in the middle of the week. I get to see my cat.

You have multiple cats?

What do you do in New York?

Interviews mainly. Every time we've been here we've been really busy with press and stuff. We've had more time this time. So I went out looking for shops and things. It was good. We've got good friends and stuff, so we just kind of hang out.

Alright, it was good talking to you. Good luck with everything.

Thank you very much. It was great talking to you. Maybe we'll meet again sometime.