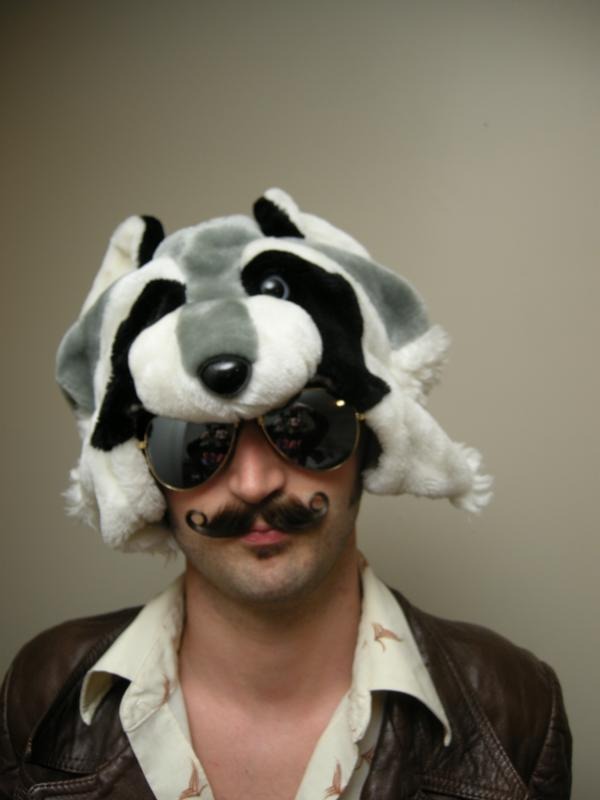 Josh Martinez is a Halifax emcee, recently relocated to Portland, Oregon, who has consistently made records under several monikers with limited attention paid by the indie media darlings. Impose is not one of those foolish publications. We've got the skinny on Josh's latest album, his favorite beer and a great story about Josh meeting Devin the Dude.

Josh did the interview while he was printing up the documentations for his musician's grant paid for by the Canadian government. Mr. Martinez wanted to shout out Her Majesty's Government in Canada for keeping him alive.

It's no secret to anyone that's heard of you that booze is one of your favorite things in life. Do you have a favorite beer or even a favorite micro-brewery in Portland you would like to shout out?

Josh: There's so many microbreweries here. Everybody drinks. I was just at this pub that's also a microbrewery that I'm a huge fan of. It's… why I am forgetting is beyond me. I drink it all the time.

You're really blowing your chance at a sponsorship deal right now

I've got to think big like that for sure. I think the Bridgeport IPA is my favorite here.

The liquor of choice that I'm definitely spending time with recently, which I'm sure is a dangerous process… When I was in Europe I brought back a huge stash of Absinthe. Not the American kind that does nothing, but a French absinthe that has the wormwood.

I imported some Czech Absinthe two years ago that I'm finishing off, so I know what you mean about the dangers of overindulgence. So Josh, it’s been a few years since your name has popped up on my radar. I recall hearing some of your work back when you were lumped in with the Anticon collective. What have you been up to since the early 2000s?

That energy and that time frame created a lot of excitement in a movement all over America and Canada to make hip hop that replaced the music that no longer seemed to be a logical extension of the stuff we really lived for from ‘88 to ‘94. I sort of got lumped in with those people, like Anticon, so my early opportunities definitely came through that affiliation, but for me the labels and politics were something I didn’t necessarily associate with.

Being a kid from Canada who made fun, silly hip hop it was important to me to continue to do that without the burden of affiliations. From there I really tried to branch myself out as an artist with the hopes that I could succeed in that grey area between genres.

What Anticon tried to do for awhile was make hip hop that was really disconnected from where hip hop came from. In trying to find a place that was different, they disrespected what all of us love about hip hop. I think that’s where I really moved away from them and tried to get my raps tight. I wanted to rap good so that I could afford to get into experimentation. But, if my raps were shit then I’m a poseur who is playing in waters above my head.

About five years ago, before every single rapper and his mom had a rock band, I started one. I accepted the fact that things were changing drastically and it was time to think ahead of the curve. Hip hop was a very strong cultural force for awhile, but at the same time it started to run out of ideas that were new and fresh. I didn’t want to be caught in that whole collapse.

What were some of the steps you took to expand your limitations as an artist?

As a grown ass man, just rapping and cutting beats wasn’t doing it for me anymore. Working with live instrumentation has been a critical component for me. I can play instruments, but I don’t record myself playing. I like to take the traditional role of the producer where I bring various ideas and elements to the table. I have people who are more capable than I am, who can actually make these ideas happen. I’d say redirecting my craft into a songwriter perspective has been a big part of my growth as a musician.

In making The World Famous Sex Buffet what were some of the goals you hoped to achieve?

More than anything I wanted the respectability as a songwriter. It’s a really hard thing to ask for and achieve when you come from hip hop. People tend to stigmatize it as just beats and rhymes and that’s it. I’ve been doing this a long time and I was ready to be respected as someone who is looking forward. The best reactions I get are when people say, “my mom loves your record and so does my kid.” I’m not trying to switch my style up and do something completely different as an apology for the music I’ve made. I just wanted to make an acceptable, interesting hip hop album that sources other forms of music as its inspiration. I needed to expand into areas I hadn’t been to before.

And I want bitches. I don’t think that’s unreasonable to ask.

[Unfortunately, the tape began to cut out from a bad phone connection. Josh began to scrutinize hip hop enthusiasts and rappers for aggressively asking why women aren’t at their shows. Josh was making a claim that you’ve got to offer a sex buffet or something.]

People stopped going to hip hop shows because they got stagnant and boring. Not single-handedly, but I’m trying to make shows that are more fun and entertaining than what hip hop has traditionally done.

In listening to your record, I hear the maturity in the sound, but I also noticed the homage you pay to the golden era emcees through referential lyrics. How important is it to you to keep that hip hop reference point as you continue to branch out your style?

You have to admit there’s not a lot of freshness in music anymore. What people get excited about are the reinventions of old ideas. The new original is reshaping old ideas in new ways. The record is essentially a fight between a young person trying not to grow up and an adult looking around and trying to figure out how to deal with the situation while keeping a sense of youth. I want people to know my influences.

This record took five years of tiresome circumstances. I set out to make the best record I’ve ever made and get it to some new ears who I’ve never reached before. I wasn’t trying to reinvent the wheel, but put some new spokes on it, give it a nice frame and paint it all nice. Every time I go on stage or out to promote an album, I want people to know I’ve evolved and continued to move with the music. I don’t want people assuming I’m just another underground rapper with a relatively decent rap album and no one gives a shit.

With all your discontinuous acclaim throughout your career, regular touring with stops at CMJ and SXSW, it seems that you have a following, enough to sustain it as a lifestyle, but the major indie media sources slight you. Do you feel slighted, where other groups of similar or lesser talents are coddled by these mediums?

I would say without sounding too egotistical that I do feel it. In the very least I feel my work has been consistent and has continued to get stronger. I make a living off what I do. There are people wherever I go that are super excited about what I do. But, I’ve really never gotten the coverage or critical respect… maybe it's just coverage? I don’t get listened to in the same vein as Atmosphere, Aesop Rock or Sage Francis, even though the people, who listen to me, also listen to that and put me in that category. At some point I hope this record will be what it’s supposed to be. People will hear it and it will grab their attention. I don’t know what else I’m supposed to do. It’s not for lack of trying. It could have to do with basing myself out of Canada early on, but now I live in Portland, Oregon. Maybe that’s part of the problem.

How did you get Devin the Dude on your album?

The craziest thing about the Devin collaboration is me and Sleep [of Oldominion] are in a group called the Chicarones. We go to SXSW every year after meeting there in 2000. We met a guy [name unintelligible] who, as the years went on, became influential in getting Devin the Dude’s name to a wider audience. He understood, as I did, that a lot of the people outside of hip hop were into the more melodic sounds of the genre that also included that personal and funny style. He felt that Devin’s Rap-A-Lot fan base wasn’t going to get him as much as all these little niche groups who were starting to get into what he was doing.

He thought I was straddling that line as well and thought me and Devin would get a long. It was totally crazy because I was a huge fan of Devin since the Odd Squad days. Some random Chicarones summer package got sent to Devin directly, he heard the record, but I knew nothing because no one ever gets back to me about anything. I run into him at a conference for Pop Montreal randomly on the street. I see him and I was like, “hey Devin, how you doing? Why don’t you come in here?” I was being wined and dined by a Canadian label at the time. They had 10 people in there buying steaks and whatever. I invited him in like “don’t worry, this shit is not on me. Let’s get some steaks!”

I hadn’t really introduced myself, but somehow he figures out that I am Josh Martinez and he clearly knows me, which was crazy to me. But then, he started singing a Chicarones hook. You’ve got to be kidding me! This idol of mine knows my music and tells me he’s been playing the record all summer.

Right away, we got along like a house on fire. I’ve brought Devin to Canada three or four times for shows. Eventually we got invited down to Houston to do a Chicarones show in the Fifth Ward. We got on stage to a bunch of gangsters in the front row who were like “ohh hell no!” We felt screwed, but by the second song there was that one guy who (you know how sometimes in crowds there’s a leader?) ended up going ape shit after we did some really fast rhyme. All the sudden the crowd was on our side, we did two encores for the hoodest crowd we’ve ever played for.

The interview continued with Josh and me shooting the shit about our cities’ professional basketball teams, in which he called my team (Sacramento Kings) “young and terrible.” But, being a Portland Trailblazer season ticket owner, he knows about struggling young teams.