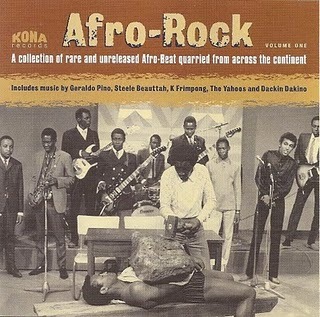 Duncan Brooker, the compiler behind the now-legendary Afro-Rock collection originally released in 2001 and getting the re-release treatment on Strut Records has some of the stories behind his crate digs.

I had always loved the Matata album on UK label President and then started picking up the local Kenyan 45s of bandleader Steele Beauttah’s own material – ‘Africa’, ‘African Stomp’, ‘What’s That Sound’. I had heard that he was still alive and that a few people had seen him. Someone tipped me off that I could contact him through Simmers, a restaurant in Nairobi where he occasionally played live. He would sing there in return for a meal on the house. So, I went there and they arranged for me to meet him. He had been living a fairly rough life for a number of years and, at the time, had only been back on the scene for a short while, so my timing was good. He turned out to be a lovely, wonderful guy, full of stories – he had played for Idi Amin in Uganda, for the BBC and had toured in Europe on the same bill as Miles Davis.

This was on Ghana’s Ride-Away label. I first went to Ghana in 1995 and was wandering around the large market in the middle of Accra, asking about records. After about two-three hours there, someone mentioned that I needed to talk to ‘Mr Ride-Away’ and took me to an 80 year-old guy selling plastic chairs in a shack. He was one of the main highlife producers of the 60s and 70s, on a par with A.K. Brobbey and the Ofori Brothers and couldn’t quite believe that an English guy wanted to come and talk to him about music. He was extremely helpful – he took me to meet highlife legend Nana Ampadu, showed me the Ghanaian Broadcasting Corporation and introduced me to A.K. Brobbey. Two weeks later, I saw him again and he had brought two sacks full of 45s from his home up-country. I have an enduring image of that day when he called two women across and I followed them through the market, each with a large sack of 45s balanced on their head.

I met Abdul Karim the first time I went to Kenya – I was there for Reuters as a soundman and had taken some time off in Mombasa. As I was pulling into Nairobi in a bus, I spotted a classic old record shop with Gramophones hanging up in the window. I went back there straight from my hotel and was welcomed warmly. Abdul’s Dad had set up the shop during the early ‘70s and was a big player in the Kenyan music scene as well as a pro-activist for musicians’ rights in Kenya. Abdul had reels from the Melodica catalogue – I spent days with him listening through vinyl and tapes. He pulled out this one reel marked ‘Dackin Dackino… Afrobeat’ so I sensed I was in business. Neither of us knew Dackino’s name at the time. The only reel to reel player he had only played at 7 ½ speed and the tape was recorded at 15 so we had to transfer it from reel to cassette and then jam the cassette fast forward button at half play to actually hear it at the right speed.

This one happened thanks to A.K. Brobbey, credited on many Ghanaian records as ‘Africa’s number one producer’. He took me on the long journey to see Mr Ofori, one of the Ofori Brothers that produced this track. He had become a chicken farmer so Brobbey very kindly drove me far into the bush and we eventually reached his farm. Ofori kept his tape reels in a farm shed – there were tape boxes lying everywhere with many chickens perched on them. He was pushing the chickens away and managed to find the reel for this track amongst the chaos.

John Collins was my first port of call for Ghanaian music. I went out to see him at the University of Accra during the mid-‘90s. I had read all of his books and he seemed to be the most knowledgeable in his field. He owned the Bokoor Band recordings and enticed me into taking a track. He then subsequently took me round Accra, introduced me to legendary entrepreneur Faisal Helwani and showed me the old clubs that Fela had played, the hot spots. Another lovely, generous man.