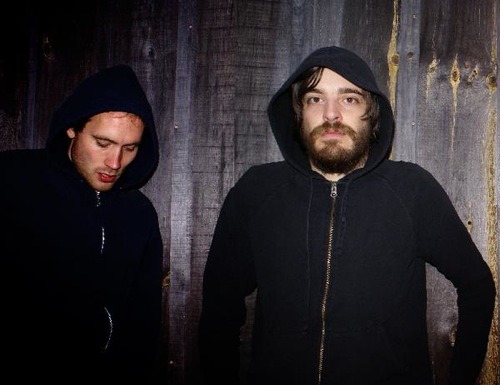 Some may consider their name vulgar, but as Brian Borcherdt points out, people don’t use the phrase “holy fuck” when they’re pissed off. “It’s not like, ‘Goddamnit, I’m at the passport office and I left my birth certificate at home.’ You only say “holy fuck” about something truly awesome.”

Borcherdt came up with the name as a facetious inside joke, not expecting the level of scrutiny it would one day be under. “If we named ourselves something like Crystal Werewolf, everyone would accept it. Instead, people think we have a lot of attitude or that we think we’re so cool, but that’s not the case.”

Borcherdt formed Holy Fuck along with fellow Torontonian Graham Walsh three years ago, with the goal of making danceable electronic music with nontraditional methods. The band doesn’t use laptops, instead opting for less-expensive Casios, guitar pedals, toy instruments and at times, wackier tools, like a 35mm film synchronizer used like a turntable.

The current headline on the band’s MySpace page reads, “Find something in the trash… plug it in”, and though a lot of their equipment comes from thrift stores and yard sales, they do brave the occasional garbage-pick. Once, in a Korean neighborhood in Toronto, they stumbled across something called a Revlon Hair Computer. You were supposed to use it to determine hair type by clipping a lock of your hair to a “probe jack.” “When we plugged it in, it made a ‘Close Encounters’ type of sound,” says Borcherdt, “but it was a little much to take on tour.”

Holy Fuck largely abandons typical band stuff like rehearsals or permanent members (there is an alternating rhythm section), and only began using set lists within the last year. Incredibly, the band created all of the songs on their new LP (conveniently titled LP) during live shows rather than through a traditional songwriting process. “It’s not like we show up at band practice like ‘Hey guys, I got a new riff!’ and everyone high-fives each other,” laughs Borcherdt. “If you’ve followed our career, you can see how the songs came together onstage.”

There was probably a severe lack of high-fiving late last year when a hard drive crash cost the band over 2,000 important files. Loads of new material recorded while on tour was lost, including sessions with Beans and Mars Volta keyboardist Ikey Owens. But hard drive be damned, Holy Fuck managed to crank out a raging party of a record, recording all of the tracks live-style.

“It was pretty easy,” Borcherdt says. “To us, more takes are more work and it’s not the kind of thing where you’re going to make a mistake. Sometimes mistakes are the cool part.”