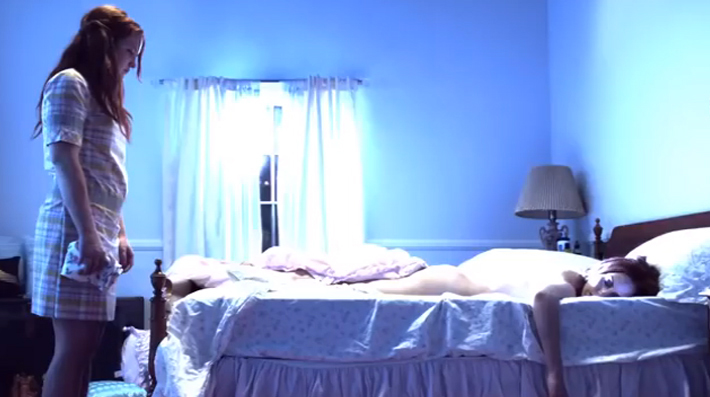 What does fear sound like? “I try to make sounds that sound like a void or an abyss,” reckons Jonathan Snipes. “Deep, crushing, ominous emptiness.”

The question pertains to one of Snipes’ recent endeavors: designing sounds and an original score for Excess Flesh, a squeamish body horror film intent on bringing viewers inside the eroding minds of its costars, roommates Jill (Bethany Orr) and Jennifer (Mary Loveless). The score, which is forthcoming on CD via Deathbomb Arc, reflects the Los Angeles noise artist’s belief that “scary stories are much scarier when there’s some internal logic to whatever’s haunting you, but you can’t figure it out.” He continues, “that’s scarier to me than shrill strings or big ‘jump’ stingers. Trying to create a sense of space that renders the listener insignificant.”

Since much of the action takes place in confined spaces, director Patrick Kennelly identified an urgent need for an unnerving score, one that could harmonize with or abrade the sound design (which involved a lot of intimate squishing and slicing). So he called up Snipes at the very beginning of the production. Kennelly had cut his teeth working on stage productions and music videos with Snipes, a member of the experimental rap trio clipping. It was a fortuitous pairing. “I love blurring the lines between sound and music,” says Snipes. “That’s very hard to do unless you’ve got a strong hand in both worlds.”

It’s not exactly common for a composer to be so directly involved with the filmmaking, but as Snipes worked on Excess Flesh, which was released last year, he quickly found himself at the center of the madness. “It was very intense and hands on, very quick, too. I basically ended up scoring this film in chronological order, which I almost never do.” He goes on, “The success of the sound in this film has definitely made me more adventurous on projects I’ve done since.”

Snipes’ background prepared him well for the project. With Captain Ahab, which dissolved in 2012, Snipes was a staple of the Los Angeles underground noise scene, a projected now supplanted by his work with William Hutson and Daveed Diggs as clipping. And as a movie and television composer, the filmmakers he’s chosen to work with similarly swim against the current. Snipes’ work for Rodney Ascher, director of the boundary-pushing documentaries Room 237 and The Nightmare, are obvious standouts. In light of it all, Excess Flesh brings Snipes to a logical conclusion: creating the sound of fear, which viewers of the film might begin to associate with the sound of no longer knowing one’s self.

Our minds are jarring, claustrophobic places to be.

With Excess Flesh, his first feature-length, Kennelly pushes back against horror’s historically problematic portrayals of female characters, repelling viewers rather than seducing with his use of violent imagery. Which calls attention to and condemns the movie’s underlying theme and source of tension: society’s narrowly constructed notions of physical female beauty.

Though Excess Flesh gives about equal screen time to its two leads, Jill’s nightmare is the focus. Reclusive and self-loathing, she beats herself up for not only what she is, but also what she thinks she cannot be. Kennelly’s camera lingers over her compensatory self-harm, refusing to relieve the mounting tension. And Snipes’ soundtrack thickens the suffocating atmosphere. His score, which evokes tape decay and swelling masses of indistinct scree, evades the pitfalls and conventions of horror film music, yet it exacerbates the disturbing imagery and elicits extreme emotional responses (without leading the viewer to believe they’ve been cheaply startled).

Though Jill struggles on a daily basis with her self-image, the film’s real trouble arises when she begins to see her roommate, Jennifer, as the source of all her problems. The horror manifests most vividly in their conflict. Jill snaps, imprisoning Jennifer in her own apartment. Then Jill starves Jennifer, taunting her with the junk food that she loathingly consumes on a daily basis. In one particularly chilling scene, Jill marks out sections on Jennifer’s body with a black marker, much in the way a plastic surgeon would before cutting away a patient’s skin. The scenario takes darker, more sinister turns with each passing day within the walls of a claustrophobic apartment.

Snipes’ music reflects the cloistered mania. And much like the pain inside Jill’s head, the film’s sound design—complete with screeches, heavy feedback, and muffled white noise—cause continuous unrest. The track “I’m Not Going Anywhere”, for instance, approximates the inescapable pain of a migraine with its crushing feedback. As it becomes almost too much to bear, Snipes pulls away, bringing a beautiful piano theme to the fore. The narrative of the film isn’t so accommodating.

As Jill, the tormenter, sinks deeper into psychosis, the film follows both visually and sonically. Which was all quite intentional: Snipes and Kennelly conceived the film as a complete whole, sound and visuals inextricably linked. “We didn’t want to provide any escape, again, we wanted to keep you inside the head of Jill, inside the head of Jennifer,” says Kennelly. “Our minds are jarring, claustrophobic places to be—hence the sound choices.”