Mal Devisa’s Poignance and Will to Thrive 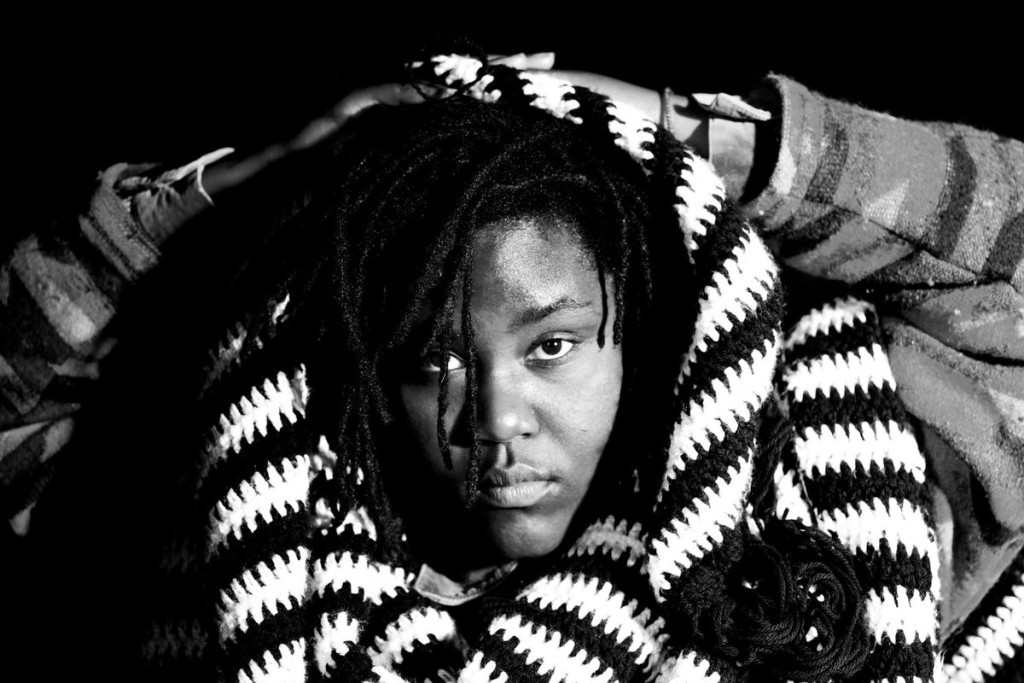 On the first track of Mal Devisa’s recently self-released full-length Kiid, nineteen-year-old Deja Carr slips into a duet of velvety bass and voice. “Fire” continues its aqueous melody with layered vocals as the question posed—“Does it kill you to know that we’re all dying?”—transforms from an external inquiry to an internal dialogue: “Does it kill you to know that we’re all dying? / Yeah it kills me to know.” Then the song swells and finally bursts in a climax of reverberation, only to come full circle and end in a brief moment reminiscent of the song’s halcyon opening. Fluctuating between hard and soft, intimate and collective, “Fire” acts as a kind of synecdoche for Kiid as a whole.

It feels significant that the first time I encountered the Northampton, Massachusetts songwriter, who boasts two EPs prior to Kiid, was in a church. Not for any religious or spiritual reasons, but because the night’s general attitude was one of reverence and rapture (and churches have great acoustics). The show was an unofficial CMJ showcase at the Lutheran Church of the Messiah with a respectable roster of synth-pop and folk outfits such as Mitski, Kaitlyn Aurelia-Smith, and Long Beard, but Carr stood out as a singularly captivating performer. Equipped with a bass guitar, bass drum, and keyboard, her set included a few of the songs featured on Kiid, most notably the assertive ode “Daisy”. As a solo performer, Carr can only play as many instruments as she has limbs. But for “Daisy”, the drum acted as a prosthetic that amplified the deep thud of her foot tapping along with the bass. The song’s fierce energy permeated the room and Carr seemed to expand to mirror the lyrics: “Oh Daisy, Daisy, you won’t like me when I’m mean / Cus I’m a six foot seven ball of energy.” As with each of the songs on Kiid, “Daisy” balances contradicting states of sweetness, urgency, courage, and vulnerability.

The album as a whole may, at first, come off as disjointed; influences range from blues to punk and hip-hop. What holds it all together, however, is the underlying current of experiencing the world in its many forms. Kiid acknowledges the myriad emotions we face and honors the validity of both love and anger. To embrace the immense polarity of the human psyche can be, understandably, overwhelming. Instead of producing a schizophrenic disarray, Kiid skillfully balances the sentimental with the confrontational. In addition to navigating disparate genres, one of the strongest elements lies in the dilated spaces both within the songs themselves and the album’s overall progression. Carr inserts room to breathe: long moments of silence and widely varied intensities never overwhelm or bore.

Despite her status as a solo artist, Carr recognizes the many collaborations that were necessary for producing the album. From her mom, comedian Nikki Carr, driving her to buy groceries when she wasn’t on the road, to the numerous friends who provided emotional, moral, and creative support, each person played an integral role. The song “In My Neighborhood”, for example, was the result of her friend Van Kolodin (of WYDYDE) having the particularly fortuitous impulse to film the song’s original improvised version, which Carr performed when she was on tour with Kolodin in Harrisonburg, VA. In an email Carr told me that, without Kolodin’s recording, the entire song would have disappeared along with the hundreds of other improvisations that are lost forever after their brief moment of unselfconscious creativity. The spirit of improvisation saturated the performance at the Lutheran Church of the Messiah when Carr asked the audience, “What should I play a song about now?” Someone answered “Church!” Carr responded saying, “I love church,” and proceeded to create a song in a satisfyingly self-referential loop with our location.

Carr’s uncertainty stood in stark contrast to the confidence of her performance, but also acted as a reminder of her complex humanity. In each of the three performances I’ve attended, Carr demonstrated a similar dichotomy. The pleasure of Kiid lies in its ability to deliver a refined—yet no less poignant—version of Carr’s live performances. Like a good day in the city, full of discoveries both joyous and bleak, the narrative that flows through Kiid offers an honest expression of fragility, strength, and the fierce will to thrive.