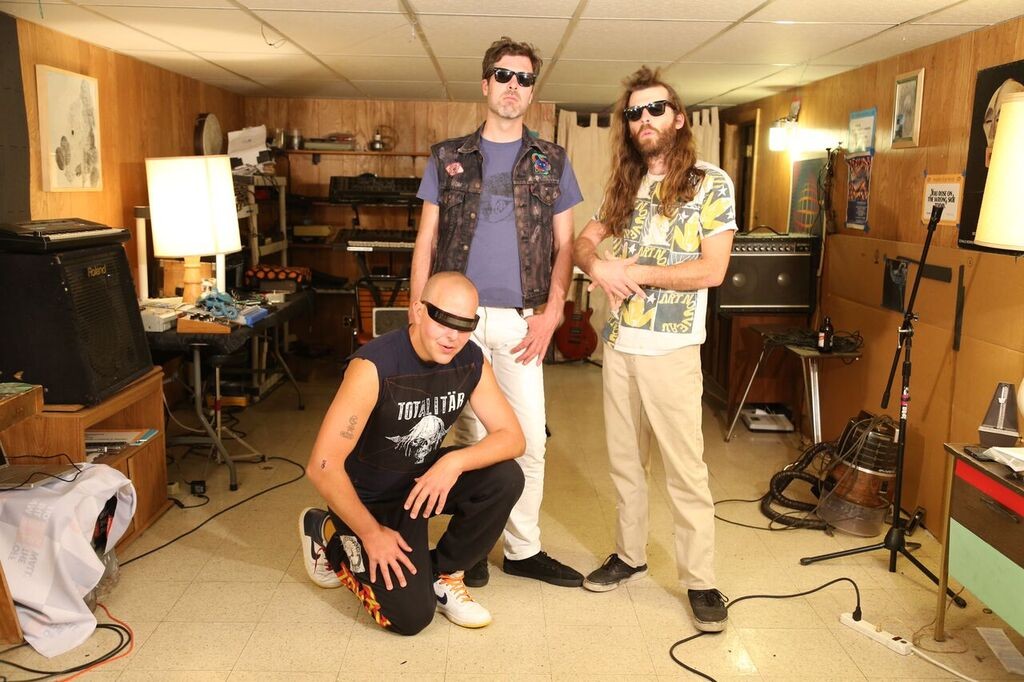 Wolf Eyes is a group of people I work with: Nate Young, John Olson, and Crazy Jim Baljo, plus Aaron Dilloway and Mike Connelly. For about three months a year, unless I go out, I listen to nothing but Wolf Eyes. My diet gets strange. I crave back issues of Fangoria. While muted horror movies play, I listen and archive.

The effort to archive Wolf Eyes’ staggering self-released output, which spans nearly twenty years, began in 2014. It was no small mess. Somebody told me a big project should either birth a beautiful baby or a horrible monster. This was both.

Like Wolf Eyes, I’m from Michigan. I don’t know how long I’ve known Wolf Eyes. But one of the first times I went to see them, I walked in and they were already playing and I thought I was in hell. There were demons, horns, and the sound of a very heavy shovel striking coal before tossing it into flames. I flailed in pure, unadulterated joy while crowdsurfing on top of hands of the hounds of hell. The next day, or maybe a week later, I saw Young at a well-lit, cheesy brewery, where he wore a really dark grin on his mug. I thought, “This dude is scary.”

The first box to come in the mail was from Olson. There was a Tin Coffin, which is so much material that it’ll be its own imminent update; the source tape of the 2003 jam with Smegma, which features Olson at the end: “Yep, I got it all;” and the incredibly rare Droll Vol. 7, the existence of which was only ever recorded online on the American Tapes Discogs page.

Connelly sent a package of discs associated with his label, Gods of Tundra. Henry Bent in Oberlin helped Dilloway organize more recordings from American Tapes and Hanson Records. I ripped the very first Wolf Eyes tape from my housemate Nathan Bowers of Tusco Terror/Embassy while he was moving in. Knox Mitchell pitched in. I pinched my own stash. Young and Alivia Zivich’s Aryan Asshole label is underrepresented if only because their works were such art objects that they don’t easily translate to the digital realm.

The band hasn’t even heard some of this stuff. When Henry Rollins visited Olson to see the American Tapes “motherload,” the store was dwarfed by his own collection back home. Installments of the Droll series are likely lost for good. Listening though, it seems that Wolf Eyes hasn’t actually changed that much. The latest stuff harks to the earliest, especially the percussion. Thank god they haven’t warmed to synclavier in their old age.

Not to be confused with the new album on Third Man, each of these two tapes were released during the Connelly era, contain ten minutes of sound and, and appeared in editions of 30.  I’m A Problem is a poltergeist–it’s flying sideways in vertical world, a saxophone played upside down by somebody whose hand is out of tune. Paper thin and dense at the same time. They might be my favorite Wolf Eyes recordings and I put them up for free even though music should not be free. That’s such bullshit. If a musician says that, they’re either rich and pandering or they do too many hippie love drugs. A few months after it went online, I set the download at $3.

The editing is more severe than Biles and less nuanced. Real choppy. You don’t hear this kind of editing on any of their stuff now, no matter the member, solo or otherwise. It just sounds like shit toppling for a long ass time and then some crazyshit comes in at 22 minutes. The very end sounds like “Enemy Ladder”.

This is some haunted woods shit, not unlike the earthen rumbles of Evil Dead. Connelly won’t talk about how he edited anything but I have some ideas. Loops and free-for-alls shift and tracks are composed of the same source material, but where a section starts from one track to the next is a total mystery. One thing I don’t think a lot of people picked up on is that these guys are as adept at digital as analog. They get characterized as misanthropes but they’re very, very smart. But I still thought Young seemed downright diabolical the first time I saw him in person.

I think we’re rocking some elephant samples in here. In the first half at, nine minutes, you can hear a section used in Time Of Clearing as a major motif, but the equalization is completely different (this was an Olson production and TOC was Connelly). Subliminal shit in this. Second half of part two is particularly haunted.

A personal favorite, Asylum Style 1’s collage structure lapses into occasional silence and the world turns sideways at fourteen minutes with a searing drone. Asylum 3 is potentially as good as any album.

Despite membership changes and the various eras of the band from no wave to noise to trip metal and so on, I can draw a line through most of Wolf Eyes’s catalog. It’s the same band. But Snake Transmitters is one that sits apart from the rest. Maybe it’s the reverb or the lack of Young’s vocals, but it’s distinct. It’s very sparse, with lapses into warm stony territory and screams provided by The Wolf-Etts (aka Rose of Zeek Sheck and Chiara Giovando). Recorded on a Davis, CA radio station, it can be difficult to tell the difference between what’s live and what was edited afterward with very subtle stereo swaps. I love it when one channel drops out completely and kicks back in five seconds later. It does have a slight Slicer vibe with tubular low-end worms and bubbling demonics. I imagine a confused suburban horror zone–teens driving on pot, terror lurking at sundown. One of my favorite things about Wolf Eyes live recordings is the chatter and there’s a laugh-out-loud moment when Young says, “I’m going to turn up his guitar amp cus he says he needs to get some feedback.”

If Burned Mind is your bag, this is prime Sub Pop-era Wolfs. A top-notch bootleg, a lot of people were apparently at this show when Wolf Eyes opened for Acid Mothers Temple. From a messageboard: “Wolf Eyes were great (as per usual). I bailed about an hour into [Acid Mothers Temple] as they were pretty dull. Spotted multiple ‘97 Hawkwind tour t-shirts.” Live Frying: Boston is also on Bandcamp, an earlier recording of the “classic trio” and superlative in quality as well.

Relentless editing. Dread zone, the entire mess of it crumbling on top of itself, winding into quakes and twists, breaking, the tape hiss squeezing & buzzing, warbling super hard like a sick sheep. Boiling, the whole thing. Boiling. Hearing just a snatch of Young’s lyrics reminds you of how good they are: “Coming on like a wretched mess.” There’s a long break in part four that’s really trippy, a ghost blip cliffhanger.