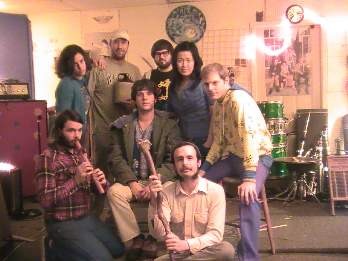 So what happens when you throw a bunch of musicians into the
forests of Roanoke Valley, VA? It could be the beginnings of a bad joke,
but for The Magic Twig Community it’s a recipe for undisturbed creativity.

Following in the
footsteps of music collectives like Athens’
Elephant Six, this group of less than a dozen musicians swap and share
members with an impressive variety of bands including The Young
Sinclairs,
The Sad Cobras, Rootstone Jug Band, Eternal Summers, The Missionaries,
SUNKING,
and Boys Lie. Each group boasts its own sound, running the full gamut
of
bluegrass and banjos all the way to indie-pop and dreamy 60's folk.

“For every Twig band that you see or hear,” explains Nicole Yun of
Eternal Summers, “There are probably five other studio-concept-projects that
may never see the light of day, but most likely have some recorded material in
the vaults.”

A self-sufficient group since 2005, the main mission of the
collaborative experience has always been writing and recording. With over fourteen albums
released and many more in the works, the Twigs focus nearly all of their time and
energy in the Mystic Fortress – their recording studio/workspace.
All of the equipment, including reel-to-reel tapes and a digital 8-track
machine, are shared amongst the members in total collaboration.

“I wouldn’t say we live in
a commune, as some would suggest,” muses Daniel Cundiff of Eternal
Summers, “However we are very interwoven in the quilt of life and live closely
with one another. We are all really into the spirit of music and really enjoy
sound as a medium.”

The Magic Twig
Community is pushing things into high gear for the New
Year, with plans for heavier touring and more releases on their own and
with the help of Athens-based Kindercore Records and Blacksburg, VA's
Chimney Sweep Records.

2. The Young Sinclairs – Forever After

3. The Missionaries – What Cannot Be Broken

4. SUNKING! – Antler and The Golden One