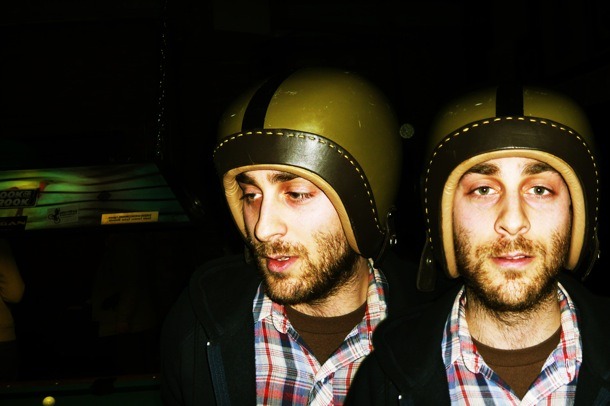 There's something about Mike Kinsella's treatment of nostalgia, youthful dalliances and getting older that come off timeless. His brand of Chicago-style melodic indie rock hasn't spoiled with age and is as married to its place as no-bullshit D.C. punk, or anthemic New Jersey rock.

I recently had an opportunity to chat with Mike on the phone before he went out for a weekend of east coast shows and on the heels of releasing his latest LP on his Owen moniker, New Leaves (Polyvinyl).

New Leaves sounds more minimal than other Owen releases. It's easier to discern between constituent parts than before. Was this planned?

I planned on recording in proper studios instead of on my own. I started recording basic guitar stuff in a good studio [with Brian Deck] and there wasn't a need to fill it out more. Sonically each track is better so I didn't feel the need to layer stuff to fill it out, but I didn't go in with the intention of recording less. Less was needed.

As a kid growing up in the DIY punk scene in Boston, my friends and I all had this romantic idea of the Chicago scene being kind of like a secret society in the way that artists and musicians collaborated and shared ideas.

Yeah I don't know if I'm a part of that anymore but I definitely think there's a camaraderie. I like that people in Chicago can get by by just playing music. It's so affordable that you can be in your thirties and not have a real job. Cheap beer and cheap good food. Still plenty of really cool venues. Everyone is here because they want to play music a lot.

Has anything changed about Chicago?

I don't know if I can really say what's changed. I know I've changed so I don't really keep up with a scene anymore and if I think about it I get a little depressed. Life took over. Everybody started getting more involved personally.

Does it suck that the Olympics aren't going to be in Chicago?

A lot of people don't mind so much. There's a history of the Olympics not really benefiting the city they're in. After the fact taxes are too much and the infrastructures become ruins.

I talked to your brother, Tim a little over a year ago right around when Boo Human! came out. I'm wondering, do you ever go to each other for advice during the songwriting or recording process?

When we're sitting around together we might. We don't really discuss the lyrical content with each other. [Boo Human!] was very personal for him. Mine are usually that way too.There's not really collaboration at the songwriting level.

Is there any significance or shared influence in the way you, your brother, Sam Zurick and Victor Villarreal play?

We were all hanging out and learning instruments at the same time. I would say that Victor was sort of ahead of us because he was kind of learning classical guitar. I think we all just sort of watched Victor. We all sort of stem from the Victor style of playing but, like, I'm a lot more attracted to melodies than Sam or Tim. Tim's style is really quirky. Sam's is so beautifully fluid he took it to a totally different insane place. I think it's pretty neat. I think they are very similar. It's just the way Victor was doing it.

Do you feel that the way you play guitar has changed over the years?

I think I've gotten lazier. A lot of open tunings and more and more I find myself writing in straight times instead of off-times and up beats. Now I'm just sort of, like, well, lazy is a negative connotation; If i have an idea and it's cool thats good enough.

That said, do the four of you ever discuss reforming in any capacity?

Yeah every couple of years it gets brought up and then we all forget about it again. It's never like we're all sitting around the same table. There are never any sort of formal plans.

I really like the image in New Leaves of you on the BMX bike, your wife, your baby strapped to you and your dog. What's important for you to do in your spare time?

I've always been a big fan of doing nothing. I've been somewhat busy with music and very busy with the family and getting a new house. When I get free time I sit and watch sports. I put off working on music because my free time is so precious. The time in between albums isn't usually as long but this time there was other stuff going on.

How has domestic life been treating you?

I really like it. We got lucky with our house. [My wife's] dad sort of comes by and tells me stuff that needs to be done so I've got a cushion to fall back on in that sense. It's a little overwhelming having the kid and the house sometimes but I enjoy doing both. I think I make sure I get to go play enough shows and do enough traveling. There's a part of me that craves going out and meeting strangers every couple of months.

Where are your favorite places to tour?

I'm going back to Japan, and that's my favorite place to be. There's something about Japan. Everyone is so nice. It's so overwhelming that your initial reaction is to just sit down and not move. Every sound is audibly stimulating and everything is efficient.

I always love going around Europe, though, too because every show isn't just a bar with drink tickets and pizza or whatever. In Europe you might play a library or an abandoned swimming pool. They really want you to be there so they cook you a home cooked meal. It's exciting to see how things are there.

What was living in and around Chicago like as a kid? Anything like Ferris Bueller's Day Off? (R.I.P. John Hughes.)

No not really. We were from the suburbs but those John Hughes movies are based on rich suburbs. The North Shore or whatever. Me and my friends watched them and didn't feel like they were speaking for us. I never had that keyboard that made all those noises and stuff.

It's very insane. Polyvinyl said, “You should set up an account.” I put off doing it for a while kind of intentionally and then did it. It's sort of manageable. You can pick and choose who you want to interact with. I think its neat if people care about what I have to say but if it never existed the world would be a better place.