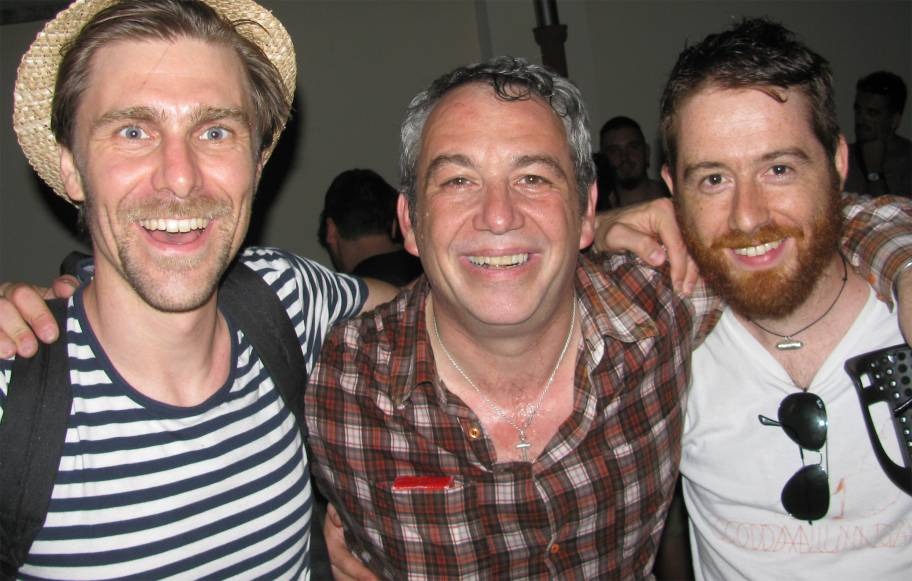 Beyond the the idea of endless adornments and accolades that comes with being a punk legend; my most enduring thoughts of Mike Watt are wrapped around images of the humble dude walking across littered strewn grass with a bass strapped to his back, making his way from stage to stage to play with different bands during a Vans Warped tour. From his work with and without The Minutemen, this DIY warrior has been partially responsible in influence for any number of global aspiring bass rumblers just starting a 3 piece band in their mother’s rumpus room.

Sometime after SXSW I had the opportunity to have a brief chat with my electric bass hero about his project Il Sogno del Marinaio and their recent album la Busta Gialla. Calling him from his stopping grounds in San Pedro, California; he expressed an enthusiasm for all concurrent, former and future projects ranging from the groundbreaking Minutemen, Missingmen, Iggy Pop and the Stooges, Tera Melos, and countless others that you have to follow via Mike’s Hoot Page in order keep up. Today our attention was centered around his work with students of the Italian musical avant-garde, Stefano Pilia and Andrea Belfi (also known for their work with David Grubbs as Belfi / Grubbs / Pilla), where Mike and I caught up as two fellow punk spirits as the gracious sir helped me as I stumbled through the Italian pronunciations.

Having recorded la Busta Gialla in less than 3 days, how does quick recording time yield the results you’re looking for?

Well, it was an opportunity, right, that’s all we had, put the material together and put an album out. That was our thing. It was a gamble, it was a roll of a dice.

I don’t think we had a predetermined idea. We’re just going to throw it up against the wall and see how it splatters, it was like that, it was the opposite of premeditation, like just do it. Striking while the iron’s hot, you know.

We met and recorded within a week, I didn’t want the record to come out until the tour though so that’s why it [came out]in January of this year. So if I what have put it out then we couldn’t have toured it probably might have gotten under the rug, you know?

I was wondering about that time gap.

So it was like 3 years but that’s the reason, because I wanted to wait until I could do a tour with them and have it come out at the same time. We’re thinking about recording the second one in August and make that loop a lot more shorter, ha ha, that’s just the situation though, this is the thing about having a lot of projects going, you know what I mean, you got to jungle stuff.

I mean you can do it but sometimes it takes a little while, ha ha ha!

Speaking of juggling projects, do you have any current Iggy Pop stories from touring with on bass?

As of this April it’s 10 years [of playing and touring with Iggy]. If you read my diary on the Hoot Page you’ll see tons of pictures. I just played with them in Austin a few days ago, playing some new songs.

Very cool, how are those turning out?

Going back to Il Sogno del Marinaio, making tracks like “Zoom and making what you called creating Cinema pour L'oreille, or ‘cinema for the ear’.

Well, that was actually the drummer man Andreas’s composition. Both Stefano and Andrea are composers as well as guitarists and drummers. It’s been a different kind of trio for me, it’s closer to what you call a collaboration. Whereas with The Stooges I take directions for example, the Missingmen or Secondmen, I give those guys directions. With this band, Il Sogno del Marinaio, is more of a collaboration. They’re like 20, 21 years younger than me they come from the avant-garde.

I know the last time you talked to us was circa Hyphenated-Man opera and you were alluding to the Oz in Frank L. Baum’s work and I was wondering on some of those poetic factors came into play?

I was kinda tripping more on the movie version with Judy Garland as Dorothy. Because in the book there ain’t no talk about the farm hands but in the movie the farmhands are the Scarecrow, the Tin Man and the Lion. And when [Dorothy] wakes up she goes, “you were there, you were there”. So what I was tripping on was Dorothy, the movie is about her tripping on what guys do to be guys. I think that’s what the big question is about middle age and I think that’s what Hyphened-Man tries to deal with you know, middle age punk rock, like myself, ha ha!

The state of punk rock state from say the middle 80s to now, how do you reflect and respond to it?

Well I still think there are some people that are in that tradition of letting their freak flags fly, also I think things got commoditized and turned into, you know commerce, like most rock and roll. I mean, Pat Boone sold many more Tutti Fruttis than Little Richard but that doesn’t mean the spirit is dead.

Where do you see this punk spirit evolving toward?

It ‘s people trying to fit in you make your own parallel universe, some of it has to do with that do-it-yourself, right? But that actually goes way back to Walt Whitman [when he] put out his Leave of Grass, somebody that’s even older than punk. Our part of the movement that was in the 70s was kind of a reaction to arena rock, so much of that is guys making music in their bedrooms, things are more econo and realistic to do it yourself now than the older days. But it still takes a creative spark, you know, so that’s why I say it’s the ethic.

You have said before too, a lot of the troubles and the commoditizing comes from this kind of ancient, and archaic, outdated concern for genre, of trying to sound like something you ain’t.

Yeah, it’s commerce. It goes in cycles, sort of like agriculture with the manure, ha ha. It’s weird, there’s always some kind of duality going on. Kind of an opposition, where they are driven by the other thing, like herd mentality in a way that drives an individualism whereas some people just can’t handle it. Some can’t articulate it like the movie Rebel Without A Cause, there’s something inside of him but he can’t articulate it. And that’s what’s great about things like painting, writing, music, and writing, trying to get that urge out from part of the heard out into expression. And it’s like a fabric, even though it’s kind of a liberation thing, it can also end up more of the fabric connecting ya. Ya got to have an open mind. Actually there’s a lot of people nowadays, especially young people that are pretty open minded when I think about when I was younger.

Definitely, and back to you, Stefano and Andrea there is a real tri fecta that’s at work. It’s interesting because those avant-garde composers in Andreas and Stefano where tracks like “Joyfuzz” go into these stringed instrument pop odysseys where your rumbling bass is so strong and pronounced that it’s its own story telling device throughout the album.

That’s another thing too, there’s a 21 year age difference but that doesn’t seem to matter. Back in the old days that would have been a huge problem, because there was so many age politics in those days, with the establishment identified with older people and stuff. Nowadays younger people are not uptight about that at all, and with those guys, yeah, I’m almost their age, this is making music without any prejudice. And I try to be the same way, there’s a problem about getting older, or less younger, and you think you’ve seen it all, you think you know it all and so situations like Il Sogno Del Marinaio I consider very healthy.

It’s interesting what you all do too, because you build something up like “Joyfuzz” and then break it all down right after that with “Messed Up Machine”.

Yeah, we really wanted to do that because part of that avant-garde thing is just free, not having parts, we wanted a counterpoint like that robot bass line improvising over that. We do a lot that stuff through improvising, it was a mindset, that was their suggestion there. And “Joyfuzz” was a 100% composed piece from drummer man Andrea's 'Composizioni', from that notebook in a yellow folder and we took it out and reinvented it for the band and some of it got changed and that’s all right, that’s how people interpret it. It’s been an interesting band for me you know, more of a traditional idea of a band where you have a collaboration between 3 members instead of 1 guy telling everyone what to do, you know.

Right! You are tapped into some of the greatest DIY minds of the modern/post-modern era.

Whew, some of it’s luck, okay, just in the right place at the right time. But that happened and left a strong impression and that’s the way I try to embrace those ethics without being just a nostalgia trip. I try to bring those old days and that’s how I want to translate it live, so it seems like being in a Minutemen again, of course things are different, they’re going to be different anyway; you can’t go back.

Isn’t that the good news?

I think that is the good news.

What did you say the upcoming title was for the August release?

Don’t have one. We call it Chapter 2, because that’s just what it is, but we got those 4 new compositions from this tour.

Any insight as to what those compositions sound like or what they’re about?

They’re adventurous, they’re a journey, these Italian guys, their approach to music is more like watching a movie instead of rock and roll licks you know.

Yeah, he’s a huge fan of Robert Wyatt too.

What’s the state of kayaking off the harbors of San Pedro these days?

I was missing in it, I jones on it, I like paddling. Ah…let’s see….the water was a little choppy last Saturday when I went out, it was real choppy, but just to be in the water again was heaven. But coming out of that tour in Europe, it was a good tour, we did 23 gigs in 23 days and I really think Il Sogno Del Marinaio have their identity now. The album helped of course but doing these 23 gigs, brought on 4 new compositions and we’re probably ready to record this stuff so I’m really proud of that. It’s not like the sound of the Minutemen, it’s its own thing.