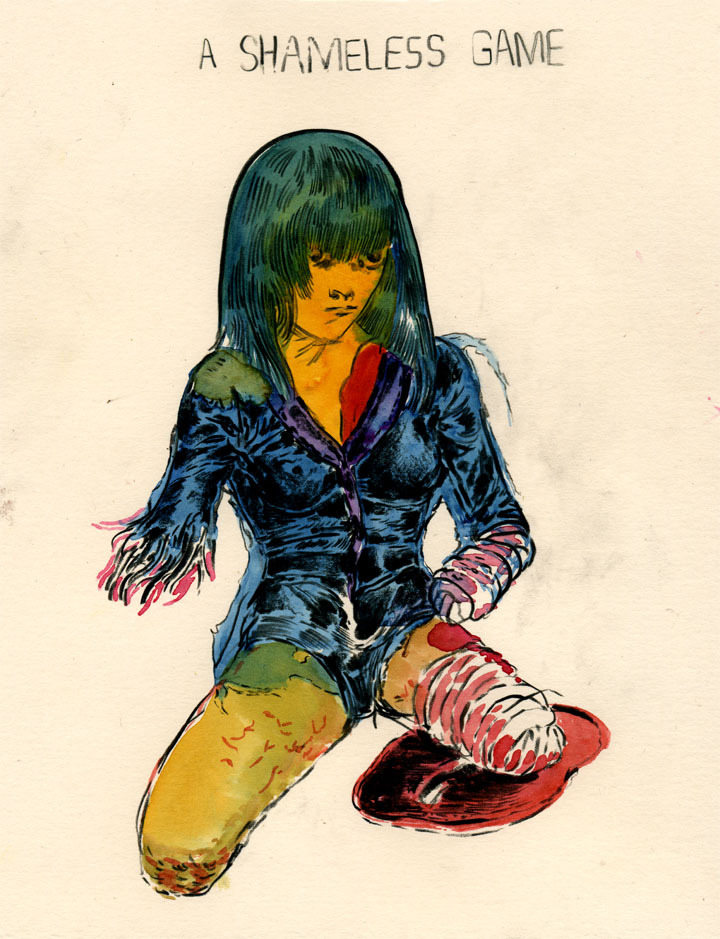 So you met Al Jaffee?

He let me come over to his studio for a couple hours and I interviewed him for a Vice mini-issue called “The Guide To Comics.” He's eighty-eight and he still draws and does what he's been doing his whole life. He's got a great memory and told me about coming to America from Lithuania to escape the Nazis and being in the first group of students at the School of Art and Music.

What else has been going on with you? Is there really anything better than Al Jaffee?

I am doing a lot right now. I just edited that Vice Guide I mentioned. I interviewed Gerard Way about his comic, Umbrella Academy. I talked to Chris Onstad who does Achewood. I interviewed Chip Kidd about his Batman obsession. It was great. I got to talk to amazing people and get boxes of free comics.

I've also been working on t-shirt designs for the Black Dahlia Murder and Mishka. On Thursday I'm going to be doing a live reading of a comic I drew for an anthology called Typhon at an event called Carousel, hosted by MoCCA.

My roommate Matthew and I have been shooting a web show where I interview people called The Creepy Touch. It goes up every two weeks on the Mishka site. My dad was in the last one we shot where we went to a horror con and he talked about how the attendees were scum.

That's a pretty busy schedule. Alright, onto your artwork, did you read Cracked growing up?

It made me nauseous. Same with Garbage Pail Kids, Mad, Ren And Stimpy. It was all too potent for me. Now I think those things are beautiful.

The guy on your comic review column for Vice doesn't look anything like you, why are you trying to hide? Is it because you pissed off an Israeli comic artist, and you worry about retaliation from the Mosssad?

Maybe it's a Jewish thing that Jews do, but I like self-depreciating humor. “I can't get no respect” and like that. As aggressive as my writing as “Sweet Nick” is, it's also full of self pity/loathing. I am not afraid of Koren Shadmi

You have been doing this punk party called Midnite Till Death for two years now, and you once told me that you thought about changing the name, have you come to terms with the name, or do you still struggle with it?

I still think the name's dumb. The party no longer starts at midnite. I don't like the misspelling. Some people tell me “till” is not spelled that way although it's not a proper word so who cares? I think if I came up with a new name it would be “After Midnight” or “Death Fantasy.” The only benefit of this name is that it's easy to google.

At 12:02 a.m., on June 10th, 2009, your Facebook status read: “I am at Cakeshop right now. I am watching a person perform a music show and her performance is lying on her back, watching a projection while pre-recorded music plays.” It is pretty weird. She is not even singing or anything.” How did you feel about that?

Bored out of my gourd. I was DJing at the time. I love that you can DJ with your laptop since you can chat on AIM and get Facebooked when shit gets dull.