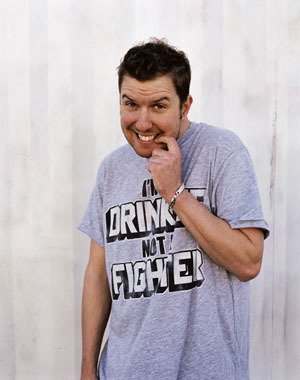 Nick Swardson isn't gay, but he plays one on TV.

With a child-like demeanor and comedy style, first impressions may belie Nick Swardson's career. The 33-year old comedian has been working in Hollywood for more than a decade and has at least 18 movies under his belt–over half he helped write or produce as part of Adam Sandler's Happy Madison Productions. This is in addition to his multiple television appearances, Comedy Central stand-up specials and subsequent CDs and DVDs, the latest of which–Seriously, Who Farted?–is the result of his first hour-long special and was released earlier this fall as a prelude to his upcoming 2010 sketch comedy series.

Of course, Nick is probably best known as the eccentric rollerblading criminal Terry on Reno 911, but don't let his ridiculous behavior fool you. Our conversation touched on some very serious subjects, like abortion, the economy, World War II and Mother Earth's vagina.

Do you worry about being typecast as a rollerblading drug user who wears inappropriately short shorts?

I hope I get typecast. I'd love to see Terry in a WW2 flick.

No seriously, are you gay?

How do you expect people to take you seriously with a title like Seriously, Who Farted?

I don't… it's not a documentary about abortion.

How do you feel your comedy has changed or evolved since your last recording?

I think my story telling has gotten better and my beer gut has made a real statement.

My favorite role of yours was in Grandma's Boy, which you co-wrote and produced. Are you surprised at the cult following the movie has garnered?

I was thrilled. I love that movie. Glad people found it. I knew people would get it cause it really made me laugh. I couldn't listen to the robot guy without cracking up.

A lot of comedians complain that they are often asked to be writers as opposed to comedians in Hollywood, and often times for things they would rather not do. Do you like writing for film and TV and have you felt any sort of compromise in this realm?

No, no compromise. For the most part. Being under Sandler's umbrella has given me freedom and we share the same sense of humor so he's always had my back. Comics that complain can turn down sitcom writing jobs. No one forces you. But a lot of them have families and the overhead becomes too daunting. If it makes you miserable then don't do it, and if you're getting good money then shut the fuck up. Especially in this economy.

Do you have a personal favorite role you have done? Would like to do?

I want to play King Kong and fuck the Grand Canyon.

What would you do for a Klondike Bar?

One comedian, dead or a live, you would like to meet/collaborate with?

Do you ever get mistaken for Seth Green?

Please settle an argument between me and an ex-girlfriend, is Benchwarmers a kids movie?

Yes, and also for adults and teens who don't take shit seriously.

Can you give us any insight into your upcoming sketch series and what we should expect?

Filth. My new show should be interesting. It's going to be dirty but I'm trying to find a balance. But there's some stuff I'm really excited for.

Last question. Give me something you wish would be added to your Wikipedia page.

“He is made entirely out of wood.”

Clip from Nick Swardson's Seriously, Who Farted? available on CD and DVD here.