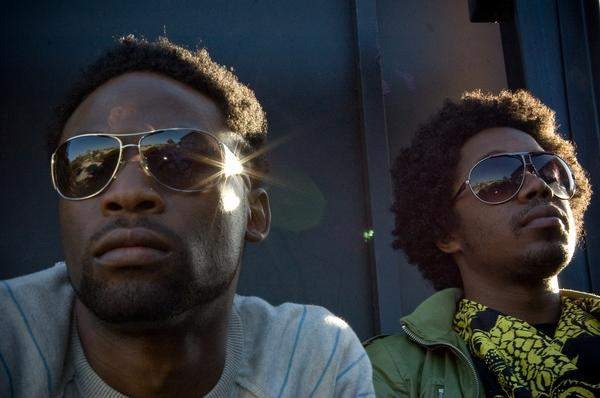 Afro Classics’ album Classic Rock struck me in such a manner that gave new meaning to the phrase “future classic.” Scarub from the Living Legends and Very of US Pros comprise the ‘Classics duo, busting out an eclectic blend of hip hop that sounds both classic and futurist. In a phone conversation I had with Scarub, he explained the creation of the album, passion for L.A. along with the meaning and purpose of their moniker.

“Afro Classics is about choosing quality. We are making classics, that is how we make music and how we choose what goes on the album. Every track must be a classic, there’s no space for filler.” And classics Scarub and Very provide, kicking off their album “Classic Rock” with the anthem “Rap Fanatic” that stomps and plods their devotion and apropos fanaticism. “We put a lot into it,” Scarub explained his commitment, “we bought up a grip of equipment to make the sound that (Very and I) wanted to make.”

The backbeat production is solid; I remarked to Scarub that if you took away the vocals you would have great ambient beats. Listening to the kinetic rhymes and nuclear lazer-synth laden track “Above and Beyond,” I asked if he was focused on engineering a “space rap” subgenre. Scarub laughed, thanked me for the compliment and detailed his seriousness about his sound.

“We produced beats that stand alone, so when you take out the lyrics you have a solid sound. Also, you want lyrics that can stand out if performed acapella. It’s like the name, it’s got to be classic. 'Pleasure Island' was the flagship song and from there we tried to make everything that solid of a sound. When we had all the tracks done, it totaled to about thirty.”

What goes into the process of deciding which tracks to keep on the album?

You know, you got to be like a coach choosing from a line up. When we made “Pleasure Island” it was like a first draft pick in that line up.

“Pleasure Island” has this futurist lovers rock vibe that’s alluring. I got to say though, “Right Yeah” is my favorite track of the moment. The eerie female vocal loop gives it a real spooked out element.

I understand that you produced the first Afro Classics album “Afro Classics?” (2001) yourself, but for Classic Rock you have enlisted the help of Eligh, Jonas Hurst, Jonathin Hendry, Mustafa, Thavius Beck and St. Louis. How was it working with them?

Pretty easy, they would play for us beats and we chose the beats we liked. They were the cream of the crop of producers; some of them were friends of mine. I mixed everything off the album, being the filter for all the different approaches and ideas that we all contributed. We wanted another dimension where you listen and we take you there.

Speaking of place there is a real sense of locale where your love for L.A. is illustrated on “Live from Los Angeles.” The visceral descriptions of its charms of “women, weather and cannabis cards” places the listener passenger side in a car driving down Crenshaw Boulevard.

With creating the scene for “Live from Los Angeles” we tried to create a real feel for L.A. You’ve seen the commercials for why it is that people come to California and they say it’s the cheese? Well, we’re saying something like that too except it’s also the women, the weather and the weed.

You were living in the Bay Area for some time too, weren’t you?

I’m from Los Angeles, but I went to the Bay Area for school and that’s when I met up with the Living Legends. Then in 1999 I moved back down to L. A. with the rest of the ‘Legends.

I was curious if you could talk about the hidden track after “Keep the Faith” that appears around 9:03.

We didn’t want to make the album too long or too short and we were left with that hidden track, “Zone” after the figuring out the track list for the record. It actually was one of the first songs that we recorded that had a demeanor we wanted. I thought Very’s verse on “Zone” is incredibly fresh. His tone, his cadence, it was one of those first draft picks.

How do you describe your style to a world hooked on contrived, autotuned mainstream hip hop?

I like to think of our style as professional where we do the most with what we have. We try to do the most with the smallest amount of things, the smallest amount of equipment. We use ideas and thoughts that provoke ideas and thoughts. I think that will have a bigger stain on listeners’ memories more than commercial music ever could. We are quality over quantity. We are classic.