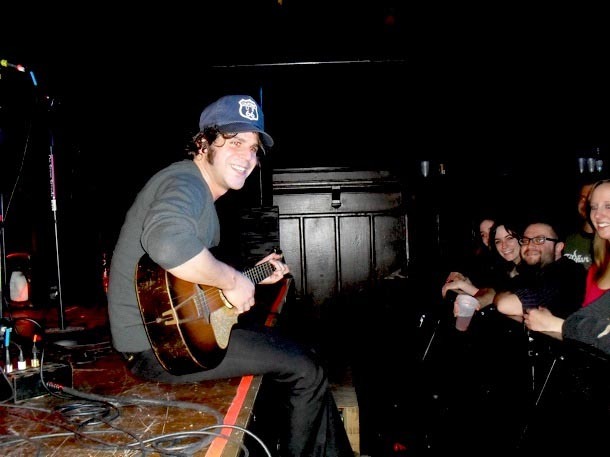 In person, Langhorne
Slim’s the kind of guy you want to hang out and have a beer with (though, in
our case we opted for wine). He’s one of the good ones.

The name alone conjures up the image of a soulful cat, while the man's hat
collection invokes envy among men. His music? Call it what you want–country-punk, neo-folk,
alt-bluegrass–there’s a simple wisdom in his lyrics, while his accompanists, the War Eagles, provide the stomp.

In support of his recently released album, Be Set Free, Langhorne Slim toured steadily throughout 2009, with notable stops along the way including the legendary Newport Folk
Festival and Lollapalooza. Before heading to Europe for a string of dates, we
met up with him at the Chameleon Club in Lancaster, Pennsylvania and strolled
around the hip downtown area chatting along the way about his stage name, the
Phillies, and life beyond the Big Apple.

Langhorne Slim, it’s a catchy name. I lived in NYC for
a long time and I remember seeing the name around town and not knowing anything
about you or your music, but being curious. I know you’re from Langhorne, PA,
but how’d you come up with the name and why?

I knew I was going to be heading to New York and had
big dreams of being a well-known musician… New York seemed oh so magical back
then. I don’t know, some of my music is influenced by blues music or early
American roots music, but it’s not all I do or anything. But, I was listening
to a lot of that music. I kind of thought it was cool to give yourself this
nickname or stage name, an alias. And so, when I first moved to New York, I
started introducing myself as Langhorne, and people would gladly call me it
[laughing]. Then as people started caring about my music and coming up to me,
I’d introduce myself and people would say, ‘come on, what’s your real name?' I’m pleased to
introduce myself as Sean and my music as Langhorne Slim.

You spared yourself the grueling process of having to
pick a band name.

I figured I’d just give myself a cool stage name, a
name that I thought would set me apart from other singers and songwriters since
I was doing a lot of open mics at the time [Sidewalk Café, Bowery Poetry Club].
If there’s any part of it that I don’t really like, it’s that people sometimes
assume it’s going to be a certain kind of music because of the name. I’m not
trying to trick people. They should listen and then form their own opinion.

Your song “Worries” was featured in a Travelers
Insurance commercial. I think I
saw it during the World Series. How’d that come about?

Very randomly. At the time I wasn’t working with any
company trying to get songs in advertisements or in films or anything like
that, and they contacted my manager Frank. He came to me, and I wasn’t exactly
like 'oh great!', but then we didn’t hear anything about it for months. I sort of
forgot about it. I got a call from Frank while I was on tour and he said, “if
you want it you got it.” I’m assuming you’re curious about how I feel about
this?

People are so crazy sometimes. They have very extreme
feelings when talking about “selling out”–all any of us are trying to do is get
our music out there, connect with more people, and sure, also make a living
doing it. When I first heard the music of bands I like in advertisements,
depending on what it was and the look of the ad, it struck me as a little
strange. For me, growing up and writing music, this wasn’t on the list of
mountains I want to climb, but it’s turned into something that’s been pretty
cool. A lot of people have gotten to hear it. You’re forced to hear it because
most of us watch some television. So, I don’t regret doing it. I don’t know how
many more I would do given the opportunity, but I don’t know that I wouldn’t.

Are you a Phillies fan?

Yes! A big one, definitely.

I saw you got to sing “God Bless America” at Citizens
Bank Park, what was that like?

Terrifying. I don’t even really enjoy karaoke, I get nervous in a karaoke bar. It’s
one thing when I’m performing my songs, I have a better grasp on them, but
something like “God Bless America?”
A million people have sang it before and I don’t really view myself as
that kind of singer. I want to be a good singer and want to be thought of as
one, but I don’t know. If they had asked me to sing the “Star-Spangled Banner”
I would have said, “Thank you, but no thank you.”

Did you get to meet the Phillies?

Yeah, but I viewed it as something I could sort of
check off. If I have kids one day I can tell them, “I sang God Bless America at
the Phillies game–dad’s cool!”

Were you pleased with your performance? I mean it’s one
thing performing at a show where people came to see you, it’s a totally
different matter playing for a stadium of 40,000+ baseball fans.

I was pleased with how I did, but I never know if
people know the whole story. Did you see that game?

No, I didn’t get to watch that one.

Well, what happened was, they took me down to this
little waiting room by the dugout and the Phillies just start getting their
asses kicked by the Marlins, a 20-minute inning or something like that. There
was a bad call and one of the players [Shane Victorino] got kicked out of the
game. The crowd is booing and cursing so they introduce me, 'ladies and
gentlemen XPN’s blah blah blah…. Langhorne Slim,' and the people are just like
‘fuck you!' So, I was actually kind of proud of myself, I was nervous, and
then in the face of that I felt quite calm. It was very much out of my hands.
It was a cool experience.

So, tell me about your new album, Be Set Free, how has this album evolved from previous ones, any
new challenges? How do you stay inspired?

Sometimes I do, sometimes I don’t. I’ve been told my
songwriting has changed.
But, how your writing changes as we get older? I wish I had a better way of
putting it, these are the songs that came out this time around. As for the way
it sounds on the record, I just try to surround myself with people I really
respect. I definitely surround myself with some very opinionated folks and we
just get in the studio and try and put the pieces together.

Do you arrange the songs in your head when you write
them, or?

I write mainly on guitar, sometimes piano. I’ll flesh
out the songs, bring it to the guys and they are just nasty beautiful
musicians… I have to remember we use ‘nasty’ like ‘that shit’s really good.’ [War Eagles consist of Jeff Ratner on up-right bass, Malachi DeLorenzo on drums and (new member) David Moore on keyboard and banjo.] It’s very stripped down, just me and my guitar. I bring it to them, and more
times than not, what they do puts a big smile on my face and it sounds great.
As soon as I write a song too, if we’re on the road, we’ll start playing it and
that really fleshes out the song so that’s an interesting thing. Sometimes I’ll
write because I have a deadline for the record and knowing I need to get that
done I’ll have a burst of inspiration… I wish I could get myself to always do
that. I’ll finish the songs really quick, there’s something cool about it that
way cause it’s kind of raw. For that reason, I know that the album is
different, but I just trust myself to not force myself to go one way or the
other. Sometimes it’s like someone sprinkled fairy dust over your head and there
you have a song, I’ve had that happen. And, then I have songs that are three
years in the making… those experiences–when the song is just born–are very awesome.

[With a great smirk on his face] The road. Northern
California is where my girlfriend is, my mom and grandmother are still in PA,
bro in NY, other family in Jersey and NY.

You’re on the road so much, how do you stay grounded?

Playing music for a living is very humbling. I don’t
know if I stay grounded, but it’s a humbling existence. I love to do it. I hope
I’m good at it cause I know I’m not good at anything else. There are times on
tour when you feel really tired, like you want to go home, but I get to meet
cool people and travel around.

Is there anyone in particular you’d like to collaborate
with?

Neil Young called but I turned him down. Ian MacKaye–that would be crazy. He walked in the club right before you guys came in [Ed. note: LS ran into Ian MacKaye in the burrito shop across the street from the
Chameleon before the show, who talked to LS briefly and later
stopped in at the Chameleon. He didn't stay for the show, as he
was speaking across town at Franklin & Marshall College]. I’ve always wanted to collaborate with
a great friend who I’ve fallen out of touch with, James Jackson Toth. I think he’s
in Nashville, Tennessee now.

Are you done with New York?

I don’t know. I was so done with it for a while. I’m not itching to get back. For me the
big city action isn’t what I want right now. I thought that was me for a long
time, and I think that maybe it was, but the way my life has gone–touring all
these months, going back is too hectic. I want sunshine and nature, space and
nothing too fancy, a little house, a garden. Unless you get really lucky or can
afford it, wherever you live in New York, there’s just not a lot of space. I
just got burned out on it. Now, more than ever, you can do what you want
wherever… maybe I will go back, but not tomorrow. Well, actually I will be
going back tomorrow.