The chronicles of Rangda according to Chris Corsano 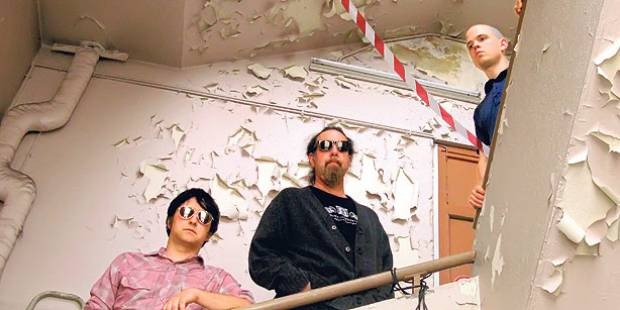 Rangda, named after the terrifying Balinese witch goddess and comprised of Ben Chasney, Chris Corsano and Sir Richard Bishop Following up 2010's False Flag, their new album Formerly Extinct on Drag City resurrects the mesolithic for post-digital age where this musical trifecta present an osmotic channeling of musical histories built out of a unique synergy. Chris Corsano talked with us at length with notes and insight into the process from this triple headed hydra threat.

So Chris, you Ben and Rick live in disparate places , how did you all find the time to come together to make Formerly Extinct?

Well it was done a little bit on the run and those guys came up to my house for a couple of days and we tried to write as much as we could and then we did a short tour, wrote a little bit as we went and had a few days in the studio in New York at Black Dirt Studio and wrote some stuff there I guess as quickly as we could.

It’s a different focus from your previous album False Flag where there before it was more brash and here there is bit more restraint exhibited as if there was some kind of excavation narrative of former societies built of a musical trifecta. What was different making this second album?

When we did the first record and I think we all assumed that it would be pretty improvised in the way of time to set up that we had to do it. When we did False Flag we had done one show and one rehearsal and not in that order and we had recorded so we had about 2 days and these guys are really amazing at coming up with stuff and then also improvising and that record may be a mix of that and there’s a few quieter tracks and there’s a lot of noisier things and with the second record, I don’t know…a lot of it comes down to what is in your head at the time and when you’re strained, I mean we didn’t have unlimited time to come up with stuff and then it’s like probably some sort of recipe of what we had all been listening too and then you get this group mind and then what follows. I guess things became tighter, I don’t know if that’s the right word, but maybe also it has to do with the studio that we were in, Jason [Meagher’s] place is like the drums are in a separate room, and the first place where we recorded it like a big open room and it kind of felt right to just blast. Then the next studio we were in had more separation between everything and we had more of an opportunity to try and get some more intricate and scripted things going and we could record it so that would come across on the record I guess, so yeah.

And from that there is a really interesting blend to where everything goes into the next thing.”Goodbye Mr. Gentry” has a real kind of tranquility to it and then “Silver Island” and I am probably not going to pronounce it right but “Manjun”.

Good question, I think it was like “Mag-nune” but yeah, I don’t know, your guess might be as good as mine. It’s from like a Turkish but then Persian literature, but I don’t know, my Farsi is not so hot.

The genre exploration on FE occur in a manner where the narrative gets tense but the epic tracks “Silver Nile”, “Goodbye Mr. Gentry” and those don’t have that tense nature but they these lulls that work within a manner that is well blended.

Maybe that is function of it not being our first record where everything was kind of open and ultimately determined by what do these 3 guys do. And you know, if you look at Ben’s records, Rick’s records, those guys cover tons and tons of ground. So they can kind of do anything and so I think the first record was kind of the 3 of us scratching our heads and going, ‘well…’ You know, without having a ton of time to really sculpt it we got what we got and maybe it was better that way too. But the new record has changed things forward and the noiser things again maybe it was the studio or maybe it was where our heads were at but listening back to back maybe it was more of the separation of the studio and it’s not like we have given up on noiser or frenetic, crazy stuff, we just weren’t getting the right kind of noisey, it was sounding right for the record or just for our ears at the times at the time. But whatever, if there is another [Rangda] record which I hope there will be, that would be killer!

Another that thing that three of you bring to the table with your collective experience or your penchant for improve and collaborating, how come you rarely given break the 11 minute barrier like on “Silver Nile” but rarely with the control between you Ben and Rick do you warrant a track to be longer than 10 minutes. Seems like you could easily release 40 minutes songs if you all wanted to… but you don’t. Why?

Ha, ha, well, the longer ones tend to be set up on a riff and it might repeat for an undetermined amount of time until some sort of change or signal so it is easier to get it within the 10 minute range or higher because it’s just you know, you just keep this, it’s not a drone but it has similar effects and that is the point of being long is to kind of get people hopefully in a head space so when that change does come it is a really good change or whatever. And so I guess the other stuff and maybe the other riffs for whatever reason didn’t feel like they bared as much repetitions or the feel we were going for there and there are certain things that we have done live that might come out at some point that have been longer and are similar to that structure and set up something and go somewhere from it. I guess it’s still open, it’s funny how these 2 records and these records crystallize the band in a certain way it’s a major representation but it’s not the only thing, it’s just one side of us. Especially in jazz or anything with an improvisational nature I never saw Charles Mingus or anything, but I have these things in grained and burned in my head but when you hear his live records they are totally different and some works are totally stretched out. Not trying to compare us to Mingus, but like I was saying you crystallize yourself when you put out these records and maybe I’m not even that conscious or those people aren’t that conscious that that’s how the world perceives you so…but it’s good that you mentioned that because maybe now it will force us to do a bunch of really long stuff. There is that aspect of it.

There are musical tropes and thematic underscoring with progressions like “Idol’s Eye” that connect to “Majnun” in a certain way where certain progressions introduced there come back full force with Spanish style guitar. Were there any dialogues going on how the song’s might inform one another between you Ben and Rick?

We kind of came up with what we came up with and some of them were written in close succession and you kind of o tweak it to where it’s close enough but not to close to where it’s just a repetition of the song. And we listened to them all and we said okay we have to keep, and at that point none of them have names right, so we have to keep 5 away from…I forget what we were calling all of them ha ha, some of them had totally stupid names super embarrassing ones. So “Plugged Nickel” which comes before “Majnun” I think and then listening back and hearing and saying okay, that goes into that and then and we’re also interpreting them like, it’s funny to have friends say, ‘oh that first song on the second side sounds like Italian prog and none of us we’re thinking that so if there is a theme between songs I guess it comes down to the listener’s interpretation either not matching ours or running parallel like the friend who heard Italian prog but it’s funny how that goes.

Other collaborations in the works, things to expect from you 3 horsemen in the future?

Tour in October and we have a live thing recorded and those are longer, more jams I guess, like “Plain of Jars” off the first record that might come out and present a different side of what we can do and after that I don’t know, writing the next record and some stuff that is a continuation of what [Formerly Extinct] is but then goes different places and stuff. With those guys it’s really fun, they’re amazing guitarists, really incredible songwriters which I am always amazed by because I am not from that tradition at all so much. When we got together the first time it was like how the hell are we going to do this so we are not just improvising, they can come up with like riffs and turn those into not just riffs but develop them and stuff. I’m thinking there is a lot places it can go so I guess we’ll just see what those are.