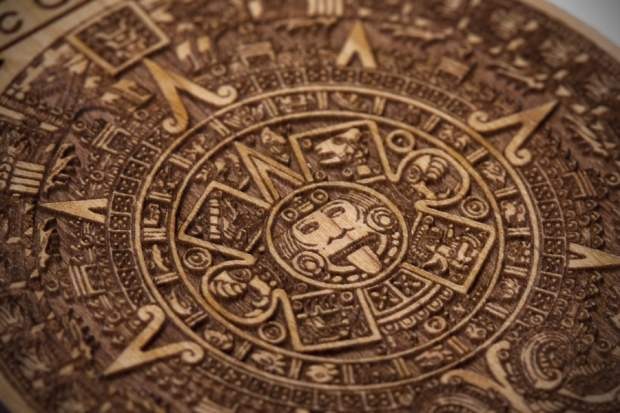 It's been a long time coming, but the end of 2012 — barring the Mayan apocalypse that is, at the time of this writing, still several days away — is upon us. What better way to celebrate here at Lines of the Week than by looking back at some of our favorite lines of the year? Below are ten of our favorite moments. Please note that we didn't say “the ten best” but “our ten favorites.” What follows is a list of favorites from Rap Genius editors, curated and finalized (and unduly influenced) by your loyal author. But enough prevaricating. Let's get the countdown started!

10. “Guacamole, my pistol-e/Kick niggas in they face — soccer goalie” — Noreaga, 'Talk 2 Em' lyrics
If you've been paying any attention over the past year, you know that Nore's mixtape Crack on Steroids was hands-down one of our favorite releases of the year. His bizarre comic sensibility is best expressed on this rhyme, an intentionally strange pseudo-hashtag rap punchline whose faux-Spanish and nonsensical simile render it truly a wonder to behold.

9. “They seen my pigment and thought that was the ig'nance/Unfortunately, I am not that type of niglet” — Joey Bada$$, '1 Train' lyrics
A lot has been said over this past year about Joey Bada$$. Next big thing, standard-bearer of real hip-hop, savior of rap fans everywhere. That's a lot of pressure for anyone, never mind a kid born in 1995. He's managed to rise above it all, and gives one of his best performances on this A$AP Rocky cut. The “niglet” here shows that the youngster has a sly sense of humor to go with the burgeoning political and racial consciousness that the rest of the line makes plain.

8. “Eighteen wheeler gorillas/Black with gold chains, pitch bird like Steelers/Hines Ward of the crime lords/Running through this money screaming 'encore'”— Pusha T, 'Pain' lyrics
Pusha T had a huge year, linking with Kanye West for a series of solo songs and cameo appearances that pushed his already-high visibility to the next level. Luckily, he managed all this while still talking solely about cocaine, which made us extremely relieved. Coke talk is the canvas on which Pusha paints, and there is no one making more creative art on that background than Push-a-ton. The “pitch bird like Steelers” pun was his best in a year full of them.

7. “Please sir, may we have another portion?/We're children of the beast that dodged the abortion/Neck placed firm 'tween the floor and the Florsheim/We'll shut your shit down, don't call it extortion” — The Coup, 'The Guillotine' lyrics
The Coup's Sorry To Bother You showed that Boots Riley's radicalism and his rhyming were still both in top of the line form. The “'tween the floor and the Florsheim” bit here would randomly pop up in our head every few days, lending our otherwise humdrum doings a bit of excitement and awesomeness.

6. “And if we're saying how it really is, we know our lily skin still give us privilege/Advantage is given to the few that are built into the roots of our biggest institutions” — Brother Ali, 'Letter To My Countrymen' lyrics
White privilege is a huge and (for white people, at least) uncomfortable topic in America. But it is a necessary one to speak about in order to give everyone in the country the fullest chance of reclaiming their humanity. Brother Ali, especially this past year, has been a leading voice, both on record and on concert stages, towards getting the white majority to examine where they really stand, and to try to accept that, as the OG race traitor Noel Ignatiev says, that discrimination against someone else is actually discrimination for you.

5. “They cock them hammers, wave them llamas/But that's that in front of the camera drama/So when the cameras are attached to dollys, I call 'em Dalai Lamas” — Pharoahe Monch, 'Damage' lyrics
This song, the final one in a trilogy of tunes from the point of the view of a bullet, portrays the narrator as gleefully psychotic. In a year full of mass gun violence, this conceit had a bit more resonance than anyone could have wished. This rhyme shows the bullet's sardonic attitude and sense of irony while simultaneously providing the greatest pun on “Dalai Lama” that we've yet heard.

4. “Reflection infinite, Escher/In the end, we are who we are uhhh…Ke$ha” — Jean Grae, 'Kill Screen' lyrics
“Kill Screen” is a particularly uncompromising song, even for someone who has never been known for subjugating her art to commercial considerations in the first place. The tune is nearly four and a half minutes of head-spinning puns, wordplay, and thematic playfulness. This line, while not the most sophisticated the song has to offer, itself works on several levels. The MC Escher pun, unusual in its own right, simply sidesteps the obvious, ignoring the “MC” in his name. As for the second half, Jean told us that when she first thought of this line, “I laughed for like five minutes. I was like, I can't quote Ke$ha. Then I was like, yeah I can. That's hilarious. Who else is gonna quote Ke$ha? Nobody — not even Ke$ha.”

3. “We are the Xany-gnashing/Caddy-smashing, bratty-ass/He mad, he snatched his daddy's Jag/And used the shit for batting practice” — Earl Sweatshirt, 'Super Rich Kids' lyrics
Earl's verse on this song is a marvel of internal rhymes. The fact that, on top of that, it continues the song's expert characterization of the idle young rich is a bonus. The fact that all of this happens on one of the year's most important and best r&b albums — well, that's something for the ages.

2. “Football or volley-b, hock-el-y or socc-el-y/You just get the rock to me/Try and put me down like Gaddafi over Lockerbie/I'll lock you in a locker, b/Like Bruce Leroy locked Johnny in a locker, see” — Lupe Fiasco, 'Put Em Up' lyrics
Lupe Fiasco gave us one of the year's trilogy of Occupy-influenced rap masterpieces (for more on the other two, albums by The Coup and Brother Ali, see above). But his finest moment occurred nearly apart from politics altogether. The “Lockerbie” and “locker, b” homophones literally stopped us in our tracks the first time we heard it. And the second. And the third. It wasn't until way later that we realized he continued the joke by alphabetically going from “locker, b” to “locker, see [c].” Moments like this showed that this record's The Great American Rap Album subtitle was not really an exaggeration.

1. “Me and my niggas four deep in a white Toyota/A quarter tank of gas, one pistol, and orange soda” — Kendrick Lamar, 'The Art of Peer Pressure' lyrics
No surprise here. 2012 was Kendrick's year, one in which his record sales and critical acclaim finally came to line up with his already-flawless reputation amongst hip-hop heads. His album was full of great lines, but this first lyric seemed to us a natural choice. Everything that happens on the record — the crimes, betrayals, reconciliations, epiphanies, and all the rest — spin out forwards and backwards in time from this one iconic image.

We'd also like to take a minute to thank you all for reading LOTW. It is an absolute pleasure to write, and we appreciate you taking time to look at it every week. We look forward to providing you with Lines of the Week for a long time to come.