Fuck the earth, and fuck you 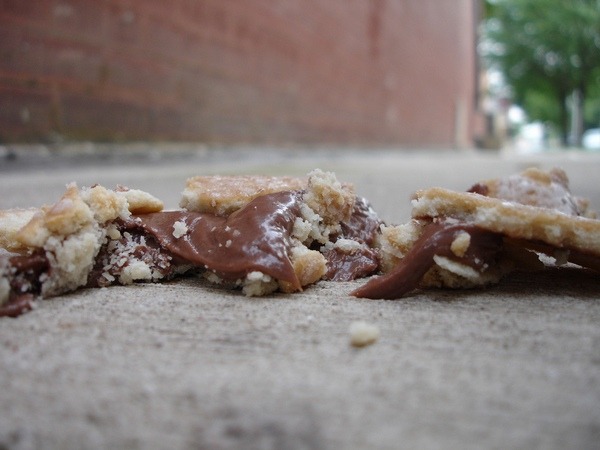 I am officially a man who gets into dessert related accidents. More than two in a life is too many. This time a small woman on a bike ran me over while I guiltily tried to eat an entire pie while walking. I was on the street holding the pie and alternately staring into and eating it. The whole day was in that pie, and I was glad it was big enough to last me the whole trip down Broadway to my friend’s house. Eating on the street, the New York special, is essentially being totally alone. No one wants to look at you, you savage. Everyone instinctively and graciously looks away when you are violently food-hole cramming a pie. Then she slammed into my back. At least she was nice about it, but she cared about the wrong thing. “Oh my god I’m so sorry, did I hurt you? Hello?” Seeing a pie face down on the ground is so unbelievably sad. “My… pie…” There it is, broken and dirty and leaking. It's worse than face-down street-pizza, which is bad enough to make total strangers come up to you and say “hey listen I was sitting over there and I saw you holding that fresh slice and I know you really wanted to just eat the hell out of it and well… I'm sorry for your loss…” At least I wasn’t as bad as when I got hit by a car while biking carrying a plate of cookies. “Sorry about the cookies…”

So that’s enough to now have a problem with biking and eating delicious desserts. A new superstition is born.

I’ve decided to kick off this blogzone like a boat heading into the black future’s unknown but ultimately divinable vibe waters by just stating the obvious: we need new superstitions. “Need” is hilarious because, like my pie story, we have no choice in the matter. Our brains do the important sensitivity work of our lives with an epic game of trial and error go-round, a daily “what will traumatize me today” search. Or if you prefer, a battle of wits and pathetic aesthetics.

All the superstitions need to be reset for our current new era. They are defiantly being created too fast to understand, and we’re gonna need help to be able to exist in our preferred perfect luck state. All the umbrellas in the house, walk under a ladder, black cat stuff worked great for being scared for no reason in the past, but now we’ve got a lot more um, smaller things to worry about. Cell phone small. Text message small. Twitter burp small.

I suppose everything should indelibly change. It would make us all feel better to throw it all out, start over, immediately birth a new system of fears and things to complain about. We’ll all have so much fun. But Superstitions happen naturally, they grow out of statistical meme succulence, when you have an idea you swear was your own but was actually just something that your friend said to you when you were tired or on the phone or on “forgetful stimulants”.

“That’s right son, I’m the one who made up the white lighter superstition. That’s why all you see before you is yours…”

Really you just thought that white lighter was disgusting and people agreed with you. It’s a common thread for humanity; ugly disgusting white lozenge creature-forms give everyone the subtle primordial willies. Enough people get dumped after lighting up with whitey, enough bar chatups go awry, enough white lighters found at arson sites, and something’s up, something dark is in the water: stay away from white lighters.

In Lincolnshire, England, 1560, a man and his son threw rocks at a black cat and managed to break its leg before it escaped into the dark house of a known witch. Next day, they saw the woman walking to the market with her arm in a sling and her face bruised up, all the thousand years of cat deification went right out the window, “cats are witches FOREVER!” they burned a thousand cats a month in France before King Louis put a stop to it “because of the smoke”. But here in the soft green CF light of 2010, black cats just look like confused ninjas, eating garbage or chillin in laps, and the witches have marketing jobs or are majoring in printmaking at Pratt collage. The stone-movingly slow grind of monolithic superstitions like black cats or knocking on wood makes no sense in our current revved up culture-hotbox. So I’m not sure what’s bad luck now, but I’m sure there’s a website up somewhere if your willing to fall down that internet rabbit hole that catalogues the new new age black void habits of life negation. It will be updated every 20 seconds.

Or “never order a white Russian over jade bar”

Or “never unplug your server on a Wednesday”

Or “never dump car enamel in the gutter in broad daylight while smoking”.

While leaving my home in Ridgewood I passed an autobody shop where a large man in work overalls was casually spraying a massive puddle of car paint with a hose to get it down the drain before the entire earth up and died. The cigarette gripped in his mouth hung lazily. This was not going unnoticed by the cars passing by, as dumping car paint is up there with oiling the babymilk in terms of environmental impact. People were slowing down to yell at him and honking, which is a nice statistical indicator of environmental consciousness in the Ridgewood/Bushwick zone. Like a true Brooklyn creature, he didn’t give half a flying shit. He was making money spraying that poison down the drain and charging the customer for “paint transport”. This isn’t even unethical, really, its good business sense in our hilarious new world of 2010 minds and 2010 feelings. As I approached him, someone came to a stop and rolled the window down “HEY! What the fuck do you think you’re doing!? That shit is fucking toxic! I’m gonna report you to the EPA! You’re fucking the earth up, man!” The big man barely looks at him, takes the cigarette out of his mouth and yells “Hey! FUCK THE EARTH, AND FUCK YOU”.

Did he just fuck his planet? That’s where he lives!

Let's keep the superstitions coming. Cause they’re coming. Our new fucked earth is a tiny, exciting place to live.

Next up: California Psychogeography via something called “Woodsist Festival Big Sur” and cell phones that come with their own astrological signs.