Shit Happens in the Fourth Quadrant 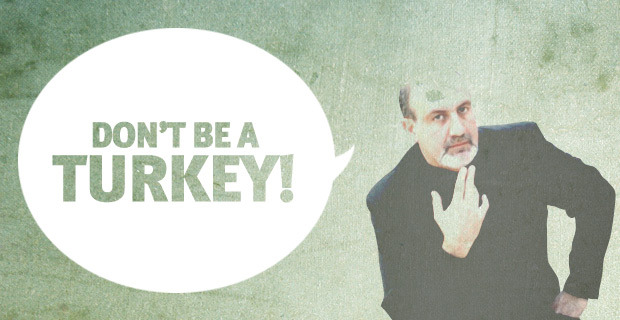 Everything they say about Nassim Nicholas Taleb is true — writes inelegantly, is unashamedly arrogant, cannot resist long-running cheesy jokes, and his Black Swan — even more effectively than does Lord of the Rings, part 3 — inspires a cry of “Is this book going to ever end?” But what Taleb says about himself is also true, that declaring him douchey is not a refutation of his ideas. And ideas he has, so I'm waving my blogger wand this new year to announce:

OH THIS BOOK IS SO ANNOYING, BUT EVERY THINKING PERSON MUST READ IT.

BEFORE THE WORLD ENDS.

What Taleb calls Black Swan is a rare unknown unknown that has large consequences. Such an event or outcome is a Black Swan only to those who were blind to its possibility. For example, to the terrorists who planned it, the attack of 911 was not a Black Swan, but to those who worked at the World Trade Center that day, it certainly was.

There are some things in our practical reality, such as a human's age, where the upper limit is foreseeable. You can guess that the oldest person's age will be less than 150, and you will probably be right. This zone is what Taleb calls Mediocristan. Here, the addition of one more person to a large sample doesn't significantly alter the average age.

There are other things, such as the value of a rich individual's wealth, where the precise upper limit is harder to guess: 2 million? 10 million? 1 billion? 10 billion? Now we're in Extremistan, where an addition of a Bill Gates may significantly alter the average wealth; here, where a few can effect a whole lot, is where the Black Swan roams.

Experts are the assholes

Taleb hates the French (this we know from several context-less jabs throughout the book), but most of all, he hates experts who claim to possess adequate knowledge and tools for making predictions: Mathematical tools used in economic forecasting, such as the Gaussian Bell curve, may work sufficiently in Mediocristan—at least as far as practical use is concerned—but because they do not account for a Black Swan, they fail miserably in Extremistan. After all, you only need one financial crisis, such as that of 1987, or 2008, for the financial world to suffer one of its largest losses: history doesn't crawl, it leaps, according to Taleb, i.e. history is shaped not by small incremental changes, but by sudden outbursts whose actual consequences were previously unknown to most (even if we know a war is coming, do most of us really know how long it will last for, or how many people will die?).

The more complex and inter-reliant our networks are, allowing small differences to ripple into larger effects, the more “extreme” the Extremistan is.

Here is Bertrand Russell's Problem of Induction, a problem we encounter when drawing a general conclusion from specific instances: If a turkey is heartily fed by a butcher for 1000 days, it has no reason to believe that on the day before Thanksgiving, the 1001st day, this same butcher will strike it dead. The goal of this book is: How to not be the turkey.

Because Mother Nature has survived for so long, Taleb looks at her as a source of inspiration in being prepared against Black Swans. While Nobel prize winners of Economics (his least favorite people) may be expected to encourage efficiency and optimization in a business, Mother Nature encourages redundancy and smaller independent networks. If it were up to economists, Taleb thinks, they would have you remove one kidney for the sake of optimization. But the more diversified and independent our financial systems are, the more protected we are against big unforeseen crises. Likewise, and unfortunately, the less globalized we are, the less air travel there is, the more protected we are against a global epidemic.

Every once in a while Taleb says something succinctly brilliant: a person's monthly income is a top addiction, comparable to gambling and drugs, because of how willingly he compromises on ethics in order to keep that salary.

Sometimes his jokes are almost good:

“Well, a gentleman called Alan Greenspan, the former chairman of the U.S. Federal Reserve Bank, went to Congress to explain that the banking crisis, which he and his successor Bernanke helped cause, could not have been foreseen because it 'had never happened before'. Not a single member of congress was intelligent enough to shout, 'Alan Greenspan, you have never died before, not in eighty years, not even once; does that make you immortal?'”

But what about the Fourth Quadrant? What the heck is that? After engaging in a war with experts who love their tools, and
realizing that nobody likes to hear “the tools you rely on don't work,”
Taleb figured out a different way to re-phrase it: The mathematical tools are safe
and relatively safe in the first three quadrants, but dangerous and
unreliable in the fourth. That is, not just “Shit Happens”, but that “Shit Happens in the Fourth Quadrant” (his own words); it's the
zone where risks with large consequences, Extremistan and complexities
mingle, but the full description of it will only make sense once you've
covered all the ideas presented in the book.

For a full long-winded experience of the Black Swan, grab the 2010 Paperback edition of the book, which includes additional material.